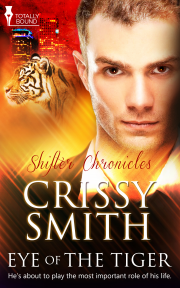 Eye of the Tiger PRINT

Book 3 in the Shifter Chronicles series

He’s about to play the most important role of his life.

Zak Lewis has been undercover for more than half a year for the Shifter Coalition. When one of the men in the group he’s infiltrated is put in danger, Zak has to make an agonizing decision. Whether or not to take another’s life.

Abilene Fox is working behind the scenes as her ATF partner is working undercover. When Luca is shot, their investigation crashes with the Coalition’s. The Coalition agent who steps into her life is something she’s not prepared for. But maybe that’s a good thing.

Zak is used to playing a role. He’s been the bad boy, the helpless, the brute, the geek and so much more. One look at Abilene and Zak can feel in his gut that he is about to play the most important role of his life. This time, for keeps.

The moon barely lit the back alley that Zak Lewis had darted into. He glanced around, not spotting the contact he was supposed to be meeting. His Coalition colleague Calvin had been the one to request the conference. Zak was taking a big chance agreeing. He peered down at his watch noting that he was right on time. Calvin should have arrived to secure the area ahead of time. Narrowing his eyes, he searched farther into the darkness for any sign of either his partner or danger. In his line of business, it paid to be cautious.

A soft shuffle of sound on the old asphalt had him moving forward even before the command to approach traveled from his brain to his legs. Training kicked in as he stalked whoever hid in the shadows.

Halfway down the alley, he was swallowed in darkness and he had to use every ability that his shifter side gave him. Little by little he relaxed, his superior scenting power telling him who was up ahead.

Standing up tall, he strolled even faster to the end of the alley where he could barely make out a chain-link fence. Sitting on broken and abandoned crates were his two best friends.

Zak grinned at the two men waiting for him. “What are you doing here?”

Jamie Ward was the first to stand. Before Zak knew it, Jamie had wrapped him in a large hug, lifting him off his feet. Grunting, he slapped his buddy’s back.

“Damn it’s good to see you,” Jamie told him, finally putting him back down.

“Fuck! It’s good to see you both too,” Zak said sincerely, turning to Cody Johnson.

He offered his hand to Cody, who was normally more reserved than Jamie. Cody slammed his hand into Zak’s then yanked him into an embrace to match Jamie’s.

The stress of the past month melted away just being in the presence of Jamie and Cody. He let himself close his eyes and just breathe for a minute.

In control once again, he pulled back. “Where is Calvin?” he asked. It was fantastic that his friends had come but he needed to pass on the intel he’d gathered to his partner.

“He finally got into that bar that you told him about. He went under a few nights ago so we volunteered to come,” Cody told him.

“Plus Aubrey threatened to cut Cody off if he didn’t see you with his own eyes and could tell her that you’re really all right,” Jamie added before chuckling.

Aubrey Reynolds was Cody’s mate and the kindest woman Zak had ever met. Like Cody, she was also a falcon shifter and she and Cody made the perfect couple. Zak was happy for his friend but there was also a strong connection of friendship between him and Aubrey that Zak relied heavily on. “Well, we can’t have that,” Zak agreed playfully.

Growling, Cody flipped them both off.

The gesture was usual for Jamie but seeing Cody act so immature shocked him. “Shit, you’ve been hanging out with Jamie too long,” Zak said, shaking his head.

“Actually”—Cody smiled evilly—“we don’t see much of our bear. Brandy has him completely wrapped around her little finger and he’s been tamed quite thoroughly.”

“Tamed?” Jamie protested, pulling up to his six-foot height.

With Jamie’s large shoulders and chest, he appeared to tower over Cody, even though he was only a few inches taller. The massive expanse would have been intimidating if Zak didn’t know how much of a softie Jamie really was. Jamie might shift into one of the scariest black bears Zak had ever seen but he was a sweet guy on the inside.

Zak held his hand up to stop Jamie from tackling Cody. He didn’t have time for Jamie’s antics, even if he really wanted to enjoy the show. God, Jamie would rile up anyone. Cody normally took his behavior better than most but even Cody had his limit.

“I’ll get you and your little dog too,” Jamie threatened.

Tilting his head to the side in confusion, Zak looked at Jamie. That was a weird statement.

Jamie laughed quietly. “Aubrey brought home a stray pup she found in a ditch. When I went to pick Cody up tonight, he was bottle-feeding the baby on the couch.”

The picture of his big tough friend nursing a pup was so vivid that Zak had to bite his lip to keep from laughing loudly.

“Aubrey’s working a case!” Cody said, exasperated, as he threw his hands up.

Zak’s chest ached as he thought of missing that and everything else for the last two months. He’d been undercover for the Shifter Coalition trying to figure out who was leading the attempts to start a shifter and human war.

Ever since the shifters around the world had announced their presence, a lot of groups had formed to either fight or protect their beliefs.

As a tiger shifter, Zak didn’t have a pack, caste or group that he belonged to. The feline shifters followed a royal line for guidance but lived solitary lives. Prince Zachary had chosen to go public and all species of felines had gone with him.

Zak didn’t care one way or another if the shifters went public. He’d been with the Phoenix Police Department along with Cody and Jamie when Jamie had gotten kidnapped by the men he’d been hunting. Of course, he and Cody had gone after Jamie right away. They’d rescued Jamie and a wolf shifter, Colt, just as the other wolf shifters had arrived. That meeting had led to the three of them all accepting positions with the new Shifter Coalition.

Zak enjoyed his job, although he was getting too damn old for undercover work. This mission had been the hardest on him. He missed him home, his friends and hated that life was going on without him.

He could see it in his buddies. Cody and Aubrey were laying down roots and Zak wouldn’t be surprised if they started to talk about kids soon. While Aubrey owned a private detective agency that kept her busy, she was also one of the most motherly types he’d ever met.

Hell, she mothered him. She was always getting on him about smoking and staying out late drinking. She’d even offered to set him up with a few of her single pals. Then there was Jamie. Jamie had just met his own mate—Brandy, a human woman who had knocked the big, bad biker down to his knees with her sweetness. Zak had only seen Brandy from afar as he’d watched out for his friends. Jamie had never been happier, and Zak really wanted to officially meet the woman responsible.

Share what you thought about Eye of the Tiger PRINT and earn reward points.