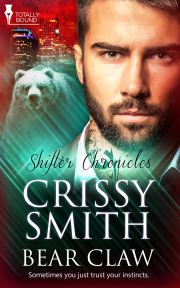 Book 2 in the Shifter Chronicles series

Beauty and grace meet muscles and tattoos. When what’s on the outside doesn’t match the inside, sometimes you just trust your instincts.

Jamie Ward is the leader of the Bear Unit for the Shifter Coalition. He uses his big, tough biker appearance to intimidate his suspects. It works for him, except in finding a mate.

A recent resident of Lake Worth, Arizona, Jamie finds himself at the local library where he meets the woman who might just be worth risking everything for, including his heart. If only he could get up the nerve to ask her out.

The two navigate carefully through the beginnings of a relationship that is interrupted by Jamie’s missing person cases and the threat of war between humans and shifters. They must work together to keep each another safe when their night out literally explodes around them.

Jamie Ward pulled his Harley up in front of the Lake Worth Public Library and parked in the first space. It was rare for him to have a full weekend off, but he’d managed to get both Saturday and Sunday free.

After spending the day catching up on house chores and shopping, he was now prepared to spend his Sunday the way he wanted.

First up was hitting the place for some new books. He could have gone to one of the three major book retailers but he much preferred atmosphere of the old building and the helpful employees.

Plus the library actually had a better selection. More diverse anyway. Instead of stocking up on only the bestsellers, like the chain stores, here a little bit of everything was available. It was interesting to him that such a small, county-funded business would be able to provide him with anything he wanted.

After he’d moved to Lake Worth from Phoenix, he’d taken his bike around to check out his new neighborhood. He’d spotted the old, worn brick building and had felt the strong urge to go inside.

One visit had turned into two then three, and now he was a regular patron.

Jamie swung his leg off the bike and stood, stretching. Even though it was officially the end of summer, the heat was still stifling at ten in the morning.

As he reached the entrance, a young woman exited the structure with a small male child. It didn’t surprise him that she steered the youngster as far away from him as possible.

As a big guy, Jamie’s size was enough to make most people apprehensive of him, but add in his numerous tats and piercings, and he literally scared people.

He hadn’t been going after that reaction when he’d first started his markings. Well, that wasn’t completely honest. His appearance did a lot to help keep criminals in their place. Since he’d accepted his new position at the Shifter Coalition as the leader of the Black Bear Division, he’d used his looks several times to intimidate suspects.

He was proud of his body art. However, he didn’t want others to feel uncomfortable. So he hung back, stuffing his hands in his jeans, letting the woman and child pass without trouble. After they’d reached the stairs, he moved into the dark, cool entry.

Arriving so early on a Sunday, he knew he wouldn’t have to deal with too many other people. He liked this time of day. He could browse to his heart’s content and see what great new finds he could pick up.

Since he knew the entire layout by memory, Jamie first headed to the new release section. He leafed through the shelf, picking up and disregarding one book after another until he settled on the latest thriller from a popular author.

Jamie enjoyed reading the writer’s work, even if the middle of his books were rather dull. The beginning and ending of each story always made up for the boring chapters.

Tucking the hardback under his arm, he turned and almost collided into one of the rolling carts.

“Sorry,” the woman pushing exclaimed. “I didn’t think you were done yet.”

Jamie looked up and grinned. And there was the other reason he chose the library instead of the city bookstores.

Most of the staff had gotten used to him and all were friendly enough but the woman in front of him was by far his favourite employee.

She’d welcomed him on his first visit then had shown him around. Jamie always made a habit of stopping by whatever section she was stocking and talking to her for a few minutes.

“Brandy,” he said cheerfully. “How are you?”

A smile bloomed across her face. “I’m great. Yesterday was hectic, so there are more books to put back than normal, but it was a fun day. Well worth the extra work now.”

Jamie shifted a little closer. Even though Brandy had been kind and open, Jamie always tried to keep his distance. She might not seem intimidated by him but he didn’t know for sure. He would have flirted with her on more than one occasion except he was certain he wasn’t her type.

A pretty and smart girl, Brandy could do a lot better than the likes of him. Still, he would enjoy her company every chance he got.

Had she moved closer to him, or was it his imagination? Giving himself a minute to gather his composure, he glanced around the small section where they stood. His gaze fell on the poster of children sitting around in a reading circle.

Brandy’s project! He wanted to smack himself. “So the reading went well?” Jamie had forgotten that on Saturdays the library had started a children’s reading program.

Brandy had been so excited about it and it was all she’d talked about on his last few visits. If he had remembered, he would have stopped by and shown his support.

“Yes! We had fifteen kids show up and all of them ended up checking out at least one book. All the parents enjoyed the break and said they would be back for the next one,” she said.

“That’s awesome. All your hard work really paid off.”

She blushed, which was as cute as anything he had ever seen. “Your suggestions on where to hang the notices around the neighbourhood really helped. Over half of the adults told us they had seen the flyers.”

“That’s good.” Jamie was glad his suggestions had worked. Since he constantly watched his surroundings, he’d noticed where children seemed to hang out. “I’m glad.”

“It’s so important that kids get the chance to visit. Most of the parents in the area can’t afford the high prices at the chain stores and now they know they can come here for free.”

Brandy was practically bouncing on the balls of her feet with happiness. Jamie’s heart swelled. In his world, he saw so much ugliness. Brandy was a breath of fresh air to a hardened man like himself.

“I wish you could have seen how excited everyone was.”

Jamie made a mental note to drop by the next reading circle, no matter what. He’d have to stay back to make sure he didn’t upset the kids or their parents, but he wanted to see Brandy in her element. “Me too.”

“So enough about that. What are you looking for today?”

Jamie held up the book he’d chosen. “I was just browsing. I’m about to head over to the north section. I looked up some books on spirituality and I wanted to see if you had any in stock.”

“Oh, cool.” Brandy shoved the overflowing cart of books to the side and motioned for him to follow her. “Actually, we have several new titles that I’ve put out in the last couple of weeks. And I think there is one that you have to read. I finished it in one night. I couldn’t put it down.”

Jamie followed her through the long rows of bookcases, listening to her speak in quiet but animated tones. It didn’t matter who the author was or whether he was interested in the book, he would check it out to keep that brightness in her eyes.

Rounding a corner, Brandy paused to let another patron pass and Jamie didn’t miss the onceover the guy gave her. She didn’t notice the other man’s attention. Brandy smiled politely, still talking to Jamie, and he had to work to keep the smirk off his face.

Share what you thought about Bear Claw PRINT and earn reward points.