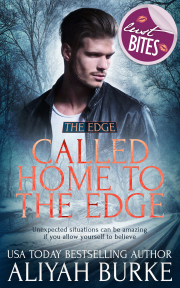 Called Home to The Edge

Book 1 in the The Edge series

Unexpected situations can be amazing if you allow yourself to believe.

Joseph Meyers grew up on a fruit farm in northern Wisconsin, and planned on spending his life there until the day his father kicks him off. Over a year later and he returns because the old man has had a stroke.

Sissy Edwin has taken over the job her mother had as housekeeper for the Meyers family after she passed. As a single parent, she’s focused on two things—doing her job and raising her son, Taylor.

These two had grown up together and had a one-night stand, but now things are different. They’re not in high school and they both have goals. Joseph’s is to have her back in his life, as she woke part of him that was dead for so long, hers is to do right by her son. Do they have what it takes to keep it all at The Edge, or will everything fall apart?

“It can’t keep going this way, Jen. He won’t listen and it’s about to sink all around him and Mom. You have a business degree. Can’t you get him to listen to some advice? Something that could save the farm?”

The woman across from him shook her head. Her blue eyes, usually full of sparkle, were subdued.

“I didn’t realize it had gotten so bad. I know our father is a stubborn old fool, Joseph, but to say he kicked you out of the farm because you looked at the books? Really? Even if I do talk to him and I can do it until I’m blue in the face, he still won’t be convinced that any way other than his own is the right one.”

Joseph Meyer stared at his twin. She had a point.

“Besides,” she continued. “You were just there and if he’s not listening to you, hell, if he’s telling you not to come back, what makes you think he’d even entertain listening to me?”

Joseph shrugged and took a swig of his beer. He gazed around the bar and sighed. Upper class, posh, and not his scene, although he was getting his share of looks from the women there.

They must be tired of pale, skinny businessmen. Even his sister out-dressed him. She still wore her business suit from her day job at some corporation. Her blonde hair had been yanked back in a savage bun. Not at all the girl he remembered, with her hair flying everywhere as they did chores on the family farm.

“Stop judging, Joe,” she said with the familiar bite to her tone. “I didn’t want to stay there like you did.”

“As if it’s doing me any good now. I can’t stay there, I’ve been booted off the farm.” He shook his head and pointed at her. “But Princeton? You’re even acting like a snob. Look at this place.”

“Just because the floors are clean and bar top polished doesn’t mean it’s a bad place.”

“No, but the cost of the watered-down drinks does.”

She rolled her eyes. “They serve top shelf here.”

“May be what it states on the label but I know my liquor and that shit is watered down.” He held up his hands, not having come here to argue with her—he needed her help. “Could you at least try to talk to him about it next time you’re home? Offer to scan the books and use that degree to help out?”

“I’m not going home until Christmas, but yes, I will do it when I get there.” She sipped her drink. “What are you going to do? I’m not sure what I can offer him. I thought he had someone to handle the books.”

“He refuses to let anyone help out. But from the stress on his face and Mom’s, it’s not good.”

Joe got off the high chair and raked a hand through his hair. “Be right back.” Maneuvering through the crowd, he smiled at the women and nodded at the men. How his sister enjoyed this atmosphere was beyond him. That they watched him, too, didn’t bother him. Joe knew he stood out with his jeans, Henley and his heavy work footwear, especially in a place dominated by thousand-dollar suits.

Coming back from the bathroom, he realized he was exhausted and wanted some rest. The past few weeks had been harder than he’d expected and the idea of not having to roll out of bed to begin his day was sort of a bittersweet knowledge. Damn near nirvana on one hand and sad on the other. Being a fruit farmer was the only life he knew and now he wasn’t allowed to go back to the family farm.

His sister spoke to someone and he waited until she’d finished. She smiled and beckoned to him.

“Come on, Joe. You look exhausted. Crash at my place and we can continue this over breakfast.” She made a hand gesture. “Or lunch given how late you may sleep.”

He rubbed the back of his neck and nodded. “Sounds good to me.”

Hefting the bag that had been at their feet, he then followed outside to her small sporty two-seater. He couldn’t tell what kind of car. He knew trucks and tractors. He knew about cherries, raspberries, apples and more. Not sports cars.

Joe tossed his bag into the middle of the trunk and climbed in on the passenger side, groaning before locating the adjustment bar for the seat, allowing him to stretch out his long legs. He dozed on the way to her place. As they entered her apartment, he gazed about.

“Fancy,” he said with a whistle.

No hint at all to where she came from on the walls.

“Were you expecting images of cows to be up everywhere?”

Perhaps. “No, but maybe a shot or two of your family.”

“They’re in my bedroom.” She headed down the hall, her heels clicking with each step. Jen gestured. “In there.” She kicked off her shoes and grabbed some linens before entering another room.

Within ten minutes he’d said goodnight to his twin and had climbed into the bed she’d provided for him to use. She’d done well for herself, no doubt. Joe closed his eyes and succumbed to his exhaustion.

He woke early, as his body had long been conditioned to do, but when it sank in where he was, he rolled over and went back to sleep. There would be time later to deal with what was before him.

Share what you thought about Called Home to The Edge and earn reward points.

Other books in the The Edge seriesView Series Page