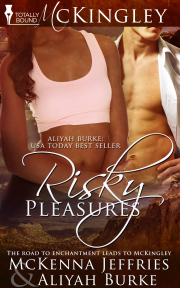 Book 3 in the McKingley series

After years of attraction, is it worth the risk?

Delicia Wright is an EMT in her hometown of McKingley, New Mexico. A confident young woman who could handle anything life threw at her, or so she believed. How conveniently she forgot the one man in town who could turn her into a babbling idiot. He was a hard man to forget, but she managed to put him in the back of her mind, along with all her fantasies of the two of them.

Archer Bennett is a through and through blue-collar man who has callouses on his hands and—most of the time—grease under his nails. He knows hard work. Unfortunately for him, the woman he desires above all else was born with a silver spoon in her mouth and to some of her family he would always be ‘the boy from the wrong side of the tracks’. So for now, all he can do is observe her from a distance.

When the opportunity arises he makes known his attraction to her and is ecstatic to know she feels the same. But with interfering family and a past that seems destined to return and bite him, can Archer convince her the best pleasures are risky pleasures?

Delicia Wright kept her breathing even as she pounded along the trail. The early spring air helped her stay cool and, given the low humidity in New Mexico, the sweat dried almost immediately. A swift glance to the watch on her right wrist told her she was on pace with her self-imposed time.

Seven more miles to go. Come on, we can do this, she gave herself the usual pep talk. The upbeat music of The Black Eyed Peas played in her ears as she continued the remainder of her fifteen mile run. She could feel her body begin to tremble with exhaustion.

Suck it up, Delicia. If you wanted easy, we wouldn’t be training for a triathlon.

She lost herself in the rhythmic feel of her feet stomping along the hard-packed dirt trail. Tired, hot and sweating, she checked her time when she reached the end of her run. Hands on her hips, she walked herself around to cool her body down. This was her year to do better. She’d trained harder than ever before, going farther than the actual triathlon would be.

It was three months away. And I’m ready. A satisfied smile turned up her lips as she moved to her bike. She entered the combination before unfastening the cable from where it secured her bike to the tree then stowed it before slowly straddling the bicycle. Delicia fastened her helmet and sighed. She pulled her water bottle from the back of her jersey, drank some then placed the container on the bike.

“Time to get home for a shower. And some food.”

She removed one ear bud to hear traffic. Foot on the pedal, she pressed on it and looked up when a large truck drove by, then backed up to turn in the entrance to the pull off for the trailhead. She stared at the vehicle when it pulled before her. A white quad cab Dodge Dually. Shit!

The passenger window lowered and she found herself staring at a man who’d always made her feel like a babbling idiot. Archer Bennett. Country music poured from the cab and she fought off a shiver when he dipped his head to the side, exposing those damnable indigo eyes of his from behind his dark brown hair. Not black like a lot of people thought—it was just very dark brown.

Delicia hadn’t any clue why he affected her this way. It was just how it was.

“Mornin’, Delicia,” he said, in that unhurried way of his which never failed to make her toes curl and skin tingle.

Dah-lish-a was how it sounded—damn near X-rated coming from his mouth. Almost everyone else called her Lis. Not him. The rare times they ran into each other and he would speak to her, it was Delicia.

He remained silent while his gaze travelled over her sweaty body. Before she knew what had happened, he stood before her. Six feet tall, hard muscular body, dark brown hair and those blue eyes. His torn jeans moulded to his legs and he wore a white shirt, which only amplified his tannedned skin and the strength of his upper body.

She stared at his hand. Long, strong fingers, short, square nails. Swallowing, she looked back up at him.

“You look like you’re about to fall over. I’m giving you a ride home. Now either get off the bike or I’ll remove you from it.”

A thousand things ran through her mind to say. She should protest. She should stay on the bike just to have him put his hands upon her. But she didn’t. With a nod, she got off the bicycle and removed her helmet. Archer stepped forward, effortlessly lifted it and carefully placed it in the bed of his truck. Then he took the helmet and dropped it in there as well.

“Get in,” he said, without looking back at her.

Delicia didn’t move, just stared at the way he filled out his jeans. Her core temperature skyrocketed. Heart pounding even faster than before, she licked her lips and barely stopped herself from stepping closer and touching him—just to see if he was truly as hard as he looked.

He looked over his shoulder at her and in the depths of his eyes she saw a sparkle. It’s like he knows I was checking him out. Archer turned completely and leaned against the side of his truck, crossing his arms. A move which highlighted the strength in them.

“Something on your mind, Delicia?”

Hell yeah. A lot. Like you n’ me doing the horizontal mambo right here. Or even in the back of your truck.

She shrugged and shook her head. “Nope.” Swallowing her fear she asked, “Should there be?”

A flame flickered in his eyes before he sent her a slow, sensual grin. “Could be. Come on, I have to get to work.”

A sharp retort was on the tip of her tongue, but she swallowed it back. She truly was exhausted and appreciated the ride. He held the front door for her and she walked towardss him.

“Thank you,” she said, slipping past him and onto the leather seat.

“My pleasure.” His murmured reply followed her in.

Archer closed the door and was soon positioned behind the wheel. She buckled herself in while he did the same and smoothly shifted into gear to get them back on the road towardss McKingley.

A few miles passed in silence and Delicia spent the time wishing she weren’t drenched with sweat, and that she had the ability to talk to him without sounding like a total moron. It didn’t make sense—she never seemed to have this issue with any other man. Richer men than Archer. Men in top of the line suits. Cover model types, it didn’t matter. But along came Archer in his torn jeans, grease-smeared shirt, hiking boots and baseball cap, and suddenly she couldn’t say more than four words without sounding like an idiot.

Archer Bennett was the owner of the largest towing company in McKingley—Bennett’s Towing. It was also an auto shop. He had been working there since forever and had been driving a tow truck since he was sixteen. When he turned twenty-four, his father had retired four years ago and he’d taken over. She couldn’t help but be impressed by the way he’d worked so damn hard for what he’d accomplished.

Archer Bennett was a frequent visitor to her dreams, but Delicia hadn’t ever told anyone. She was three years younger than him and he’d been somaeone she’d admired from afar. When she’d gone to school functions, he hadn’t been able to attend because he’d gone home to work. She took a deep breath and fought the urge to squirm as the scent of Archer filled her nose.

“Huh?” Yep. Did I say I sound like an idiot around this man?

“I asked if you were going to your house or wanted me to drop you off somewhere else.”

“Your house it is,” he uttered.

Share what you thought about Risky Pleasures and earn reward points.

The stories keep filling your head until you wrote down, so do you formulate the whole idea in your head first and then write it down or do you have another process?

Aliyah — Oh, I’m a pantzer all the way. I have an idea but how I get to the end is all a mystery. There is but one sure thing when I start any story. It will have a Happily Ever After. I said before I’m a sap and I want to believe in HEA. We read romance to get away from the grind of our daily lives and I want to make sure mine end with a happy note.

McKenna — My process is I let the characters take me on their journey so I don't formulate the whole idea. When I sit down to write I have a kernel of an idea of how to start and possibly how it may end but not anything set since the characters tend to do as they want too. I've learned to let the