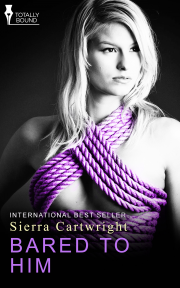 Tempted by the billionaire…

But she had never imagined that Phillip Dettmer would lay her bare to him, mentally and emotionally as well as sexually, or that the experience would change her life forever, leaving her stronger and more able to ask for what she needs…

"Twelve, thanks," Myka said slightly breathlessly. He'd patiently held the elevator door open while she hurried across the lobby of the downtown Denver office building. She'd been at lunch too long—the quarterly gathering with her college girlfriends had been too scandalously delicious to leave. As the waiter had brought a second glass of wine for each of them, they'd shared stories of their sex lives—the thrills and droughts—and now she was running late for a meeting with a client.

The man pushed the button for the twelfth floor and then fifteen, presumably for his. The elevator doors slid shut.

"Do you know anything about the book?" he asked.

She took a second look at him. He was taller than her, by at least six inches, and that said something since she was unusually tall. In heels, she wasn't used to looking up at many people.

He appeared to be in his late thirties. His dark hair had a smattering of appealing grey at the temples. It added to his distinguished good looks.

His eyes were a startling green. She had the odd sense that he saw through her tough exterior into her innermost secrets.

She knew she was staring, but she couldn't look away. His scent seemed to brand the air—something crisp and outdoorsy, a stamp of primal male power and intrigue. Even his clothing captured attention.

Myka made a decent living as a financial adviser, and she recognised quality. The suit that had been exquisitely tailored to fit his toned body cost at least a month of her salary.

"Do you know anything about the book?"

He captured her gaze. Instinct told her to look away, but she couldn't. Unnerved, she stepped forward so she could exit quickly. "It's hard not to," she said. "It's being talked about everywhere." Realising she was in danger of babbling, something she did not do, she countered, "Have you read it?"

A bell dinged, signalling that she'd reached her floor. "No need?" she asked.

"I live the lifestyle," he said.

He moved forward, crowding her space. She'd have to brush past him to exit. He pressed the button to keep the doors open. "Look me up if you're curious."

This man, tall and broad, had an air of easy command, as if he was accustomed to issuing orders and having others obey. She had an insane urge to treat him with respect he'd yet to earn. She felt her body grow warmer.

He stepped aside, and she exited the elevator. The doors slid closed.

This is another great book by Sierra Cartwright...Personally I 'm learning more and more about the BSDM world with each title I read...I can't wait until the next book by Sierra comes out.

Share what you thought about Bared to Him and earn reward points.