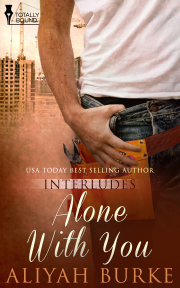 Alone With You PRINT

Book 2 in the Interludes series

Ariel Greene trudged up the steps to her fourth floor apartment after completing her early morning run. Fighting off a yawn, she dug for her key and unlocked the door. Once she’d showered and dressed in shorts and tank top, she went to her coffeemaker gratefully looking forward to that first cup.

There was none. No hot java brew set to make her a nice person and capable of facing her day.

“What? I thought I pre-programmed it.” The moment she opened the filter’s cover, she knew why the pot sat empty. Someone had forgotten to buy coffee upon their return. “Good job, Greene.” Sure, it had been late when her plane landed, but to forget to swing by a twenty-four hour store and pick some up…egregious error on her part.

After swiping her favourite mug off the counter, she headed for the door. Six-thirty in the morning. If one was to be awake, coffee—and never any of the decaffeinated type, which in her eyes was sinful and disgraceful—was a must.

Across the hall, she turned the knob and let herself into the apartment. The thick, aromatic scent of coffee greeted her like a familiar friend and she nearly groaned in orgasmic pleasure.

The man behind the island—who’d glanced up as she entered—gave her a smile. “Morning, Ariel.”

“Hey, Steve.” She hefted her cup, brushed some hair back from her eyes and yawned for what seemed to be the umpteenth time in two minutes. “Need coffee.”

He tucked some blond hair behind his left ear. “Help yourself. I thought you might be by.”

Steve Yost was a lean man. Sweet as the dickens and totally not her sexual type. Which was a pity, for she could use a friend with benefits—one who lived across the hall, even better. He was, however, a great neighbour and friend. His roommate, on the other hand, had her panties wet just by walking in the room.

She fixed her coffee then propped a hip against the platform where Steve worked and blessedly took that first life-giving drink. Hot or not, she couldn’t function without this stuff. “How have you been?”

“Obviously not well enough to remember to bring coffee home after a trip so I have some in the apartment.”

He smiled, a flash of straight white teeth against tanned skin. “How was Seattle?”

“Damn sight cooler than here, for one.” She drank some more java and purred in contentment. Things were aligning right in her world. Today could be a good day now that she’d had some caffeine.

She flexed her fingers about the mug. “Absolutely perfect. Roxi made such a beautiful bride.” A grin. “Sam was pretty hot as well. So were the rest of the Marines standing up with him. And the ones in the audience.”

Her friend, Roxi Mammon—now Roxi Hoch—had got married this past weekend. She and Roxi had served together in the Corps and Sam—her new husband—still did.

“Thanks for getting my mail,” she said, falling silent when a leggy blonde strolled into view. One eyebrow rose and she knew exactly what room that woman had come from.

“This your girlfriend, Steve?” The question was asked with a thick Texas drawl.

Daisy? Of course you are. “Congratulations?” Ariel did her best to keep her emotions subdued. Hard to do when she longed to punch her in the nose. I have no reason to be jealous. It’s not like he’s mine or anything.

Before little Ms Daisy could say another word, the man himself ambled around the corner. Tuck Carter. Construction worker. Hot as sin. Not to mention the star player in many personal fantasies that had her reaching for the drawer that held a few toys.

Bronzed skin, jet black hair and brown eyes that could turn her to mush. He wore jeans—currently unbuttoned—that formed tight to his body, and nothing else. A smile split his bow-shaped lips when he spied her.

“Ariel. You’re back.” He poured himself some coffee and sat on a counter. “How was your trip?”

His grin was intoxicating as usual and her panties dampened. Also, as usual.

“Not as well as some in this room,” she tossed out casually.

“You have people just walk into your apartment?” Daisy asked, sidling up to Tuck and leaning against him, as if trying to put her claim on him.

“Ariel’s not just anyone, she’s our neighbour and yes, she does,” Tuck said without looking away from Ariel. “Jealous, Ariel?”

Hell yeah! She stood upright, lifted her mug and toasted him. “You wish.” Attention on Steve, she gave him a smile. “Thanks for the elixir, hon. You saved my day. Catch ya later.”

Then she walked out and back across the hall to her apartment where she sat on her couch and began opening her mail. The knock on her door wasn’t all that unexpected. “It’s open,” she called out. An act she followed by taking a deep breath.

It was a good thing too, for in stepped Tuck. Still clad in only jeans, he filled her doorway with the width of his shoulders.

“You okay?” He sauntered in the apartment. In doing so, her pulse and core temperature skyrocketed.

“Why wouldn’t I be? Got what I needed.” She lifted her mug to show him.

He watched her intently before making himself comfortable on the love seat across from her. Lord, the man had muscles on muscles. A six pack was his abdomen and she had fantasies—numerous—about licking them. Licking stuff off them, trailing her tongue over the dips and swells.

Share what you thought about Alone With You PRINT and earn reward points.