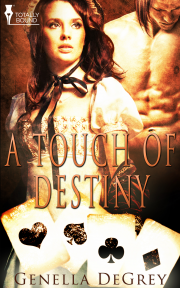 A Touch of Destiny PRINT

Share what you thought about A Touch of Destiny PRINT and earn reward points.