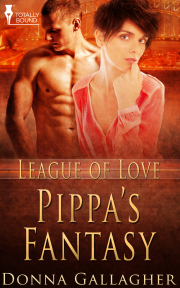 Book 4 in the League of Love series

What's a girl to do when her fantasy is within reach? Grab it with both hands, of course—then try to live with the consequences.

He was her childhood crush, her fantasy man. Pippa spent her teenage years surrounded by players from the Sydney Jets rugby league team, the fit and muscular bodies that made up the team her father used to coach an ever-present part of her formative years. But he is the only one of that group of high-profile men who has ever caught her interest. From the moment Pippa first set eyes on the handsome future star, he owned her heart. Mitchell ‘the Rookie' Harris sauntered into her life and nothing has been the same since.

The problem for Pippa becomes twofold when she meets Rook again after years apart. Now there is the moral dilemma that, as she is signing on as physiotherapist for the Jets team in a few days, she is fully aware of the 'no fraternisation' rule. But then there's the reality that her heartthrob of so many years and dreams has no clue who she is, doesn't recognise her as the young girl whose heart he crushed years before when he refused her naïve advances. He wants her, and this could be her only chance to finally get Rook out of her system once and for all.

Now Pippa must decide, and quickly, whether to risk everything she's worked for. Will living her fantasy be worth the inevitable fallout?

"Pip, if you could have anything you wanted just for one night, what would it be?"

Phillipa Rodgers—Pip or Pippa to her friends—sent Cassie a bewildered look, wondering what had brought about the odd question from her best friend.

"Well, Pip, it’s your twenty-second birthday and you are now a professional sports physio, about to begin the grown-up phase of your life—you know, responsibility and all that." Cassie giggled. "If you could have or do anything, just for one night, what would it be?"

Cassie was looking at Pippa as if she knew some big secret and couldn’t wait to tell it.

Phillipa Rodgers and Cassandra Davies had been best friends since they’d met on their very first day of school, eighteen years ago. Since that day, they had shared everything—the ups and downs of life, good or bad. Tears, fears and successes. They had always been confidantes, whether it was for a first kiss or the loss of virginity, each girl had been there to support the other. They had cried over broken hearts and celebrated the good times, but always together. Pip and Cassie were inseparable.

Pip—once blonde, like her friend—had recently dramatically changed her hairstyle. Her formerly curly, waist-length hair was now cut short and coloured blue-black in a style that feathered around her face. Pip’s eyes were a darker shade of blue than Cassie’s cornflower ones, her face slightly more pointed compared with Cassie’s more cherubic features.

The girls were out partying to celebrate completing their university degrees, dressed in the latest fashionable, chic clothes. Pip, having finished a physiotherapy degree and a year at a teaching hospital, was about to begin her career in earnest, specialising in sports physiotherapy. Cassie, with a Diploma of Education combined with her bachelor’s degree in physical education, was starting her teaching role as a sports teacher at the local high school.

Now finally back on home turf, the girls had been enjoying the scene at a new club when

"Well, if you really have to ask that question, Cass, you’re not the best friend I thought you were. You know full well my one fantasy is, and has always been, to have long, hot monkey sex with Mitchell Harris."

"Hmm, yep, I knew that, Pip. Just thought I’d double-check before I told you the man of your seven-year fantasy walked into the club a few minutes ago. Take a look. He’s standing at the bar," Cassie said as she pointed.

Pippa’s gaze followed in the direction her friend pointed. Sure enough, leaning majestically against the bar and looking as if he owned the place was Mitch ‘Rook’ Harris, and he was as gorgeous as ever. The mere sight of him caused Pip to catch her breath.

Pippa hadn’t seen Mitch in the flesh for over five years, but she noticed the changes in her first crush’s looks immediately. The young, brash man destined for superstardom had completely filled out into one hunky piece of prime male. Rook’s face was now slightly fuller, more mature. His nose—not as straight as it used to be—gave him an overall tougher, more masculine appearance. Once the ‘pretty boy’ of rugby league, he was now all grown up—and he was the complete package.

As Pippa sat staring, Rook turned from his conversation with the barman, and as if sensing he was being watched, looked towards her. Their eyes locked, and Rook’s face broke into a sexy, broad smile.

"Oh, my God, he saw me, Cass!" Pippa exclaimed as she hastily broke eye contact with Rook.

"Well, Pip, now’s your chance. What did you say? ‘Hot monkey sex’, wasn’t it?" Cassie laughed at Pippa.

Pip had first met Mitch ‘the Rookie’ Harris when he’d joined the rugby league team her father had coached. Rookie had been a cocky twenty-year-old, full of potential. Quick and with a natural footy brain, he had been instrumental in the Jets’ winning the premiership that year. Pippa had been a fifteen-year-old girl coming into womanhood, and Rookie had stolen her heart. He had been her first love.

"Not likely, after the disgrace of five years ago," Pippa answered with a hint of sadness in her tone. She’d thought fulfilling her fantasies with Rook before heading off to uni would be a good idea, but the humiliation when he’d calmly removed her hands from his body and told her ‘no’ was one she was unlikely to forget. "My God, I bared my breasts to him and he turned me down. I’m not his type. Rook will just have to stay a fantasy."

"Yeah, well, let’s just see about that, Pip. Fantasy man is heading this way—and it’s not me he’s undressing with those sinful eyes. Stay calm and see what happens. This will be your last chance at him. You told me Coach James has a strict no-fraternisation rule, and as of next Monday, you will be part of the Jets staff. I don’t think you will ever find a man that lives up to your fantasy of Rook—now is your chance to get him out of your system and then maybe you can move on."

The League of Love series is a wonderful storyline with each character shaping their own story and enriching the whole. Present in the previous books, Pippa and Rook have both been strong secondary...

Share what you thought about Pippa's Fantasy and earn reward points.