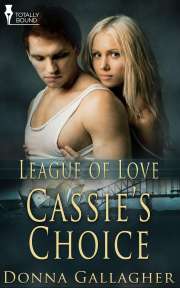 Book 7 in the League of Love series

One night of regret and a simple lack of communication leads to two miserable years apart. What will happen when the two broken-hearted are forced to reunite?

One night has haunted Cassie for over two years. After agreeing to something she didn’t feel sure about, all for the sake of a man—or more correctly, her fear of losing him, she is still consumed with thoughts of her past.

Although a few years  younger than her Riley Walters was all man, in and out of the bedroom. So much so that Cassie believed he would tire of her sexual inexperience quickly. For him she was just a bit of fun—he never said anything to her to make her doubt that assumption. The reason she put herself in such an uncomfortable situation in the first place—to keep him happy. Of course it didn’t help. Riley disappeared from her life and never had anything to do with her again. Now he’s back, part of her social circle, leaving Cassie to find a way to deal with the attraction she still feels for him even after two years of trying to convince herself otherwise.

Riley was horrified at how much rage he felt that night. Memories of a trauma from childhood quickly surfaced—he was terrified that he was becoming a monster, just like the man from his memory. Cassandra Davies filled his mind, his every thought, his obsession. Now he’s been offered a position at the Jets Rugby League Club, an opportunity to work alongside the people he called family, something he’d always dreamed of—but how will he survive being around Cassie if he can’t drag her into his arms, back to his bed and never let her leave?

Sitting in the quiet classroom after another sleepless night was not working out very well for Cassie. She had hoped that the topic test she’d scheduled for her class today would have ensured a peaceful start to her work day. Instead, as her students worked away diligently on their papers, Cassie found her mind drifting—or more precisely obsessing over the events of the recent night’s dinner at Mia’s restaurant and her run in with him.

What was it about Riley Walters that did this to her? After all this time—nearly two and a half years—and still just being in his presence turned Cassie inside out. She craved the man like some drug-addicted loser desperate for a score. She was a loser, when it came to him, her dignity and self-preservation flying out of the door at the mere thought that he might want her again. Touch her again. It was a pitiful thought for a fully grown, mature, professional woman, to know that at one time she had been so enamoured of a man that she would have gone to any length to keep him happy. Put herself through any kind of emotional or physical discomfort for fear that he might find her wanting, boring, and leave.

Cassie, though deeply wounded by the way Riley had just up and left her, tried to convince herself that it had been for the best. Knowing how much of herself she had been prepared to risk, the lengths she had been prepared to go to for him, was a chilling reminder that the relationship had not been healthy for her. No partner should have that much control over the other, or be prepared to use that power. Not that Riley had threatened Cassie in any way—for all she knew he’d been unaware of her deep feelings for him—but it had not stopped her from feeling like a slutty whore when he had walked out on the ménage he had suggested they partake in. Walked out without a word and never contacted her again.

Thinking back on the night—and Cassie had done that, fixatedly—she had come to the conclusion that if she’d only said no, then maybe things might have been different. At least she would not have had to deal with the sick feeling in her stomach or the crawl of her skin when she remembered the events of that night. She had been so infatuated with the few years younger Riley that Cassie had been terrified he would find her lack of sexual exploits or experience boring. She was, after all, the older woman, or so everyone had pointed out repeatedly. Riley’s friends winking at her all the time, stupid grins on their faces with some kind of amusing agenda in their implication. Like Cassie was some sort of Mrs Robinson or something. When the truth was, Cassie had spent so much time studying to become a high school teacher she really hadn’t had much time to explore her sensual side at all.

A few quick flings during university had been the extent of her experience, but from the moment she had met Riley, her body had gone wild for him. Cassie had never been able to get enough of him and he had taught her so much about her own desires, her cravings and what made her scream with pleasure. And she had screamed, moaned, pleaded and begged at times. Riley had been like a master magician casting a spell over her, knowing exactly how to satisfy her sexually. She would have tried anything, done anything not to lose him.

Cassie had not only worried over their age difference, but also the fact that someone with as much skill in the bedroom as Riley must have had a long list of sexual conquests to his name. How else could he have understood what she needed and achieved that goal so completely, so effortlessly? He seemed to have known exactly where and when to touch her to bring her undone.

Riley had never made her any promises, never discussed being exclusive, and Cassie had been too nervous to ever mention it, for fear of looking too needy. But it had not softened the blow when he’d upped and left.

These were all the reasons, Cassie reminded herself, why being with Riley was not in her best interests. The fact that he still had the ability to make her hurt years later and her body lust for his attention after all he had put her through made Cassie feel hopeless.

Even sitting in a classroom full of sixteen-year-olds could not stop Cassie from reminiscing about how Riley had made love to her. Her nipples poked hard against her blouse and moisture began to pool between her legs, wetting her underwear at the memory of how good they used to be together.

“Miss… Umm…hello! Earth to Miss Davies… Wakey, wakey! What’s wrong, Miss? The boyfriend have you up all night doin’ it? Although you don’t look too happy—didn’t he give you an—”

The voice of one of her more unruly students snapped Cassie from her thoughts.

“I beg your pardon, Ben,” Cassie’s stern retort was voiced quickly as she attempted to cut him off before he managed to embarrass her further or get himself into any more trouble. Then realising that she really did not want the boy to repeat himself, Cassie shouted, “No! Wait, I heard you the first time… Do not open your mouth… In fact, one more word and we will be discussing this further in detention. Do you understand me, Ben Somers? Not one word.”

Looking at the classroom wall clock, Cassie realised that she had been caught up in her own thoughts for most of the lesson, and with only minutes to go she still had to collect the answer sheets.

“Pens down, please,” she instructed her class, hearing the usual mumblings of displeasure from the students who had not finished the exam or were unhappy with how they feared they had performed.

“Quietly pass your papers forward, then you can all pack up and have an early mark.” Of course her twenty-six students had no concept of the word ‘quietly’, especially with the temptation of the weekend looming so close. The sounds of chairs scraping the floor and the excited chatter of the teenagers making plans filled the room to a near deafening level. “Ben, did you need something before or were you just trying to be annoying?”

The boy was one of the brightest in this class of gifted and talented students. It was probably the reason he was such a handful. Ben already knew most of what she taught in the personal development class, would probably go on to study medicine or something. He was also a very talented sportsman with a confident personality that was both humorous and entertaining. Unfortunately, teachers were often the brunt of his quick wit, much to the amusement of students.

Share what you thought about Cassie's Choice and earn reward points.

Donna Gallagher has been nominated for:

Favourite Continuing Romance Series for the League of Love series

The Sexiest Hero from a romance published in 2014, Riley Walters in Cassie’s Choice