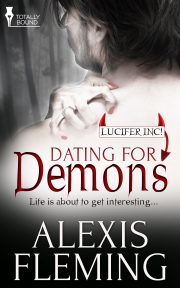 Book 1 in the Lucifer Inc! series

Araminta Tempest, Mina to her friends, isn’t normal by any stretch of the imagination. She’s one-eighth succubus demon and her Aunt Lucifer, supreme ruler of Hell, never lets her forget it. Accountant by trade, Mina normally does the books for Aunt Luce’s business, but this year Aunt Luce wants her to coach Jedd Madison, stud of the incubi stable and Mina’s nemesis from her teenage years, on dating techniques.

Mina smells a setup. Maybe it’s time to turn the tables on her nosy aunt from Hell.

“Goddammit, Luce, get your arse up here now. This is so not right.” Araminta Tempest—Mina to her friends—gritted her teeth until her jaw ached. Ignoring the crinkle of paper, she curled her hands into fists and planted them on her hips. Even the prick of her long nails on her palms couldn’t distract her from the anger whipping through her blood. “You can’t do this to me.”

“Don’t you swear at me, girl. And I can do whatever I please and you can like it or lump it.”

The voice boomed throughout the small apartment that was Mina’s home. The cut crystal hanging from the chandelier in the hallway tinkled violently. The crockery in the kitchen cupboard rattled and a glass standing on the bench tilted and crashed into the sink.

A loud screech followed by what sounded like a sonic boom had Mina covering her ears. Smoke filled the little kitchen, making her cough as a flash of bright light delivered her aunt.

“How dare you use the G word. I’ve warned you before about swearing in my presence. Now, if you want to say damn-it-to-Hell, then I’m fine with that.”

Mina rolled her eyes. Her aunt was such a drama queen. Anything for an entrance.

Aunt Luce looked like everyone’s idea of the quintessential grandmother. Slightly short, slightly dumpy—er, cuddly, as her aunt would say—with snow-white hair set in rigid waves about her kindly face. Her fingers glittered with myriad rings and her hands were a gentle caress when needed. She belonged to the twin-set-and-pearls brigade, her makeup always perfectly applied, right down to the slash of red lipstick outlining her mouth. Ergo, the perfect grandmother, but then she ruined the image with her shoes.

Luce had a penchant for sexy high heels. The higher the better. Today’s offering was a deep red pair with multiple straps that encased her tiny feet and circled her ankles. Mina didn’t have to search far to work out where she’d gotten her love for sexy footwear.

Struggling to hang onto her temper, Mina smoothed out the crumpled piece of paper and waved it at Luce. “Want to tell me what the hell this memo is about?”

Aunt Luce shrugged. “I thought it was quite clear. It’s your job assignment for the next month.”

“You have got to be kidding me.” She looked at the note, although she didn’t really need to. She’d memorized every word since it had arrived in her inbox that morning.

Araminta Tempest, your assignment for the next month is to shadow one Jedd Madison. You will assess his performance, critique his methods, scrutinize his social skills and generally act as his dating coach.

She crumpled the sheet of paper up again and tossed it into the sink with the broken glass. “A dating coach? Are you crazy?”

A ball of brilliant light exploded. Smoke suddenly wafted through the room again, followed by the pungent odor of brimstone. Heat burned through Mina’s body. The skin on her arms tightened and nerve endings clamored with sensation, making Mina feel as if she were standing in the middle of a fire.

“All right already! Turn it off. If I didn’t know better, I’d swear I was standing in the fires of Hell.”

Alexis Fleming is one of those strange people who live inside their mind. No, she doesn't hear little voices… Well, she does, just not the type you're thinking of.

Alexis' world is peopled with interesting characters and exciting possibilities that come to life in each and every book she writes. Her first love has always been romance, whether on this world or the next. Hot, sizzling relationships with a dash of comedy and a few trials and tribulations thrown in to test her characters.

When she's not tied to her computer creating sizzling stories to tempt her readers, she helps run a busy motel set on the edge of a National Marine Park in Australia. What better place to get inspiration for the tales she turns out? A glorious sunset over the ocean, dolphins playing almost in her front yard, suntanned bodies lazing on the sand… How could she not get caught up in the eroticism of that?

A wonderful spin to a theme like this. This was a fun read. Not only was the story passionate and full of hot sizzling chemistry, there were little bits of comed...

Reviewed by Confessions from Romaholics

It a fun paranormal romance from the author, the first in her series Lucifer Inc, giving her spin on the demons. Jedd was definitely a sexy demon and wasn’t what I was expecting at all and I love the...

Share what you thought about Dating for Demons and earn reward points.

The . Hey, I write sex. A girl has to educate herself, doesn't she? One of the hardest things as a writer of sexy novels is to make certain each sex scene is different and that they don't all become generic. What better way to do it than through education? Well, that's my story and I'm sticking to it.

When I wrote my first full-length story, my heroine was such a wimp. Totally helpless and unable to make a decision unless guided by the male of the moment. UGH!!
Thankfully, that story was never published. It’s the one that is languishing in a dusty box in the back of the garage. One day I might take it out and re-use the story idea, which I still love even today.  But I’d make darn certain that my heroine had a spine and had learned to stand up for herself. I guess I was channeling myself when I fashioned my heroine and yes, Iwas a bit of a wimp way back when. Since then, I’ve learned to stand on my own two feet and make my own decisions and my heroines reflect that.