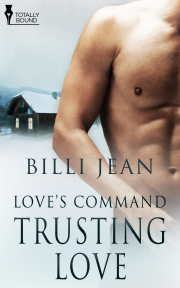 Book 4 in the Love's Command series

Kristen Sawyer wanted nothing more than to forget everyone and everything after the death of her daughter. The last thing she ever expected was to find the one man she’d never been able to have or forget—falling at her feet.

When Robert woke up and discovered that he’d passed out from his wounds at Kristen Sawyer’s home, he knew he’d found the way to hold on—and to begin again. Now, all he had to do was eliminate the men trying to keep them apart, destroy the toxic drug in his system, and somehow make her want to trust in love.

“Tazz, the intel has six men in the house,” Jansen said through their com link. “Two set up as guards outside, two inside. Senator DeRoy is inside with the hacker and the flash drive. The buyer is still unknown, but the possibility of this being the meet and exchange is high.”

Robert settled more firmly on his stomach in the snow and scanned the house below with his night vision scope. The two guards outside barely walked the perimeter of the ranch, depending on the acres of wilderness, Robert assumed, to keep them all safe. The ranch was high up in a valley, secluded but not as remote as the lack of security seemed to indicate. His gut said this was it.

“More than high,” he responded. “This is it. DeRoy is there, what we came for is here and the verification that its original is here. The hacker will have to prove something to the buyer. The players are in place,” Robert reminded the team. “Copy that?”

The com link in his ear clicked and his men on the ridge above them sent an affirmative.

“Copy that. We’ll nail them this time, sir,” Bryson added from his location in the woods opposite them.

“Good. This is all we have, boys, don’t blow it.” Robert scanned the snowy canopy of forest again, got up off his stomach, and settled his rifle over his shoulder.

It’d been four days of travel to reach this spot. If he could end this now, he might just make his sister’s wedding. Amazing as that sounded, he just might do this. End it, and go on with life without the endless battles. Do I even know how? No more war and death. The thought filled his head more than it should.

The com link crackled, breaking his concentration away from the future. “The sooner we get this done, the sooner we can stop freezing our balls off out here in the snow, too, boys,” Walters said.

“Silence from this point on. We play this like we have no idea it’s a US senator in there. I’ll transfer a pic, just as we discussed. We name him and force his cooperation. If the buyers are set to arrive I want both of you down off high ground and ready to engage,” Robert ordered. “If things go to shit, we meet back at the nest in two hours. Make sure not to leave any tracks. Wait there until you either hear from me or central picks you up.”

“Tracks won’t be an issue,” Walters muttered beside him.

Rob shot him a frown. He’d chosen the man over the other two because of the three that came forward at his call, he trusted the surfer playboy the least. “Better to have a man you don’t trust near you, rather than in an outer perimeter with a scope ready to take a silent shot,” his commander used to say

“The storm will cover everything for weeks,” Walters added with a gesture at the darkening sky.

The clouds were heavy. If they dropped the amount of snow predicted, he and his men might be snowed in for days, possibly longer. Already the trees looked like they’d been dipped in the powdered sugar that his mom used to put on gingerbread houses when he was a kid. A foot or more lay on the ground, crusted over and frozen just enough to break under their feet when they stepped through the newer, softer snow on top.

“True. Let’s use that to our advantage if things go wrong. Silence from my count,” Robert called softly, his breath steaming in the freezing air.

He moved his focus off Walters and the snow and on to the mission and all the components involved. He predicted a sixty percent success rate because too many factors were unknown. They still had no intelligence on the hacker and they knew nothing about his connection to DeRoy.

DeRoy was easier to place. The greedy bastard would sell his wife to make an extra million. But they didn’t know if he actually had the files with him, or somewhere else. They were reaching, but sometimes a gamble proved worth the risk.

One more scan of the silent woods, mountains and sky, then he held up his fist for silence. The two men flashed the red lights on their scopes and Walters nodded his understanding.

They were all dressed in winter camouflage gear with their street clothes underneath in case they needed both. They had the best technology available at their disposal but Robert would have given his left nut for a simple hunting shotgun and some alone time with the senator in the extravagant house below him. Instead he was guiding a team, with men he didn’t fully trust, into a situation that made his gut clench His instincts were on full alert, not because he didn’t fully trust the men he’d brought in on this mission, but because if the formula was down there, he was close to ending something that had occupied his life for years. And this, the mission to stop the spread of the DNA modifying drug from hitting the market, was too easy, way too easy.

Maybe it does now. Maybe this time things will work out the way I want them to.

Robert kept that in mind as he headed down the barely visible trail, concentrating on not making a sound in the dense underbrush while his mind played out the way this mission would go.

The senator was a lazy man, relaxed in his home like he was some rich rancher without a care in the world. He had two guards posted outside a set of patio doors that led to parts of the house where no one lived. Robert assumed it was so that if the guards were out there, they’d not distract from whatever the senator had going on inside.

Whatever the reason, Walters would take one down and he’d deal with the other. Both of his men on the ridge also had the guards in their sights and would fire if necessary.

Rob had been specific—no casualties unless absolutely necessary. Or the senator looked to be as guilty as hell, Robert thought. If the man was that corrupt, Robert wouldn’t hesitate to take him down. He’d done enough soul searching over the past few years of living in the hell the DNA drugs had put him through to know he wasn’t playing God, he was taking care of things his country needed him to do.

It was what the Sentinels had been designed to do. And one reason he thought that disbanding them was the only option. One man or two man teams shouldn’t decide the lives of others. A system of justice should do that. But when it came to a man like DeRoy those lines became grey. Very, very grey.

Commander Carson’s orders had been clear, though. If DeRoy was trying to sell the formula, bring him in. If he fought and died, well, that was so much the better.

They reached the bottom of the slope opposite DeRoy’s house, nearest to the open window without a hitch. The window had bothered Robert when his men had spotted it. At first. Then he’d realized it was the kid’s window left open so he could smoke weed. That detail had eased his worry about a possible trap.

As soon as he caught his breath, he checked on Walters. The other man gave him the thumbs-up. He waited to the count of sixty then motioned to the left of the house where guard number one slouched against a wall, looking bored and freezing. Walters immediately veered off to his target.

Robert had the second one in his sights. Both guards were sloppy, as if stealing top secret government information was a cake walk. Walters’ guard was texting, probably a woman. Robert’s was playing solitaire on an upside down bucket. Neither looked like the kind of professional agents assigned to a senator. That made sense, Robert thought. An agency man would not tolerate DeRoy’s betrayal.

When the guard pulled another card from the deck, Robert got in close and struck him with a sharp jab of his rifle butt to the head. The guy went down without a sound. Two seconds later Walters came back into view. They didn’t speak but Robert didn’t need to hear that Walters had taken care of his for him to know it. Together, they circled the house, heading in on the ground floor through the bathroom window the hacker had left open. Not intelligent, but smarts didn’t often combine with common sense, Robert had found.

They quietly headed down the hallway lined with closed doors until they reached an open kitchen slash living room area. Off it there was a closed door that led to a den or office of sorts. The room was large, though, big enough to hold the kind of dinner parties the senator was used to throwing. Of all the senator’s properties, this one hadn’t come up until they’d done some digging into his secretary’s finances. The senator, although wealthy and obviously used to getting what he wanted, wasn’t as smart as he should be when it came to hiding his properties. He also pinched his pennies because if he’d purchased a higher quality security system and better guards, Robert and Walters wouldn’t have been able to breech the house so easily.

Walters grinned when Robert met his eyes. No doubt the other man also saw the irony of the situation. DeRoy was beyond a millionaire and he’d shopped at Wal*Mart for men to protect him. Walters mouthed ‘dumbass’ and shook his head.

Rob allowed himself to crack a smile, but quickly nodded to the door.

All four men were within. The plan was simple. They would stun-gun the two guards, secure them, then talk to the good ol’ senator.

A contemporary romance with a touch of speculative fiction and high drama, Trusting Love opens the reader's consciousness to national terrorism.

The couple's confrontation with the Sentinels is high...

Share what you thought about Trusting Love and earn reward points.

Other books in the Love's Command seriesView Series Page