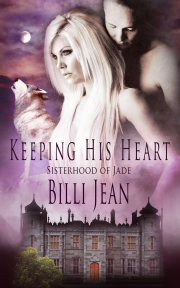 Book 10 in the Sisterhood of Jade series

Elsa Wentworth never dreamed she’d find something after death that made living worth it.

Jamie is one of the best trackers amongst his Lykae pack. But when he’s sent to hunt down one woman, he discovers more than he bargained for. Elsa doesn’t just knock him on his butt from the start, but keeps on pushing him until there is only one solution. Claim her. But if he does that, the delicate, sexy beauty might not survive. But can he survive without her, without his heart?

Since Elsa was bitten by a Vampire ten years before, she’s managed to keep herself alive—barely at times, true, but she did it all the same. And on her own. But that was before. Before she woke covered in blood with no memory of how she got that way. Before she met Jamie O’Connor and realized that running and hiding wasn’t the only solution to life after death. Before she learned that if she wanted to live, she’d have to do more than simply survive. She’d have to love.

Jamie gazed down at the city of Seattle, unsure what drew him here. His assignment was simple. At least he’d thought so at first. Find Elsa Wentworth, a former human, possibly Lykae raised outside the pack, and now a Vampire. Or, a wolf-vamp cross breed.

Find her. Watch her. Report in. Easy.

She wasn’t here. He’d realized that when he’d first pulled into town. But there were other immortals here. He watched two of them talking in an alley behind a club. He stood on the roof, trying to come to terms with another dead end. She moved. A lot. Being a few steps behind someone wasn’t what he was used to. He’d found pictures of her on traffic cameras, department store security tapes and parking lot videos. Not once had he been in the same town, at the same time, as the elusive Elsa Wentworth.

It was almost laughable. It was impressive. She was young, very young if he had to guess by the photos. But they never were good for judging age, not in an immortal. He folded the black and white print of her and replaced it in his pocket. He didn’t need it. He could picture how her blonde hair had fanned out around her head, her face almost square to the camera, just a tad off so that she was staring, startled, off to one side. He wasn’t sure what had frightened her in the picture, only that something had.

The music filtering out of the club drew his attention back to the here and now. It grew in volume every time someone entered or left the bar. The men below him didn’t move to go inside or to leave. They were arguing. One was a Vampire suffering from the never-ending bloodlust that came with killing his victims. The other man, Jamie wasn’t so sure about.

He broke away and threw his arm out. With a few more heated words, he pointed toward the town. The Vampire misted, as if he’d been ordered, disappearing from sight but not scent as he headed in the direction indicated. The man didn’t go back inside the club. He stood with arms crossed, head down, contemplating either the concrete or whatever had been said to him.

The Vampire House in this town had been eradicated by Aidan, the king of the Vampires. There wasn’t even a building left where the Vampires had once lived. Jamie had walked by today, amazed to see the ground bulldozed under. Squares of new bright green turf now covered the park. There were even cherry trees meandering along a manmade stream lined by a thick expanse of flowers.

It was a park now, named Aidan’s Way.

Jamie had smiled at the name, getting the message loud and clear, even if the Vampires had not. He was betting on them understanding quite well.

He gathered himself and leaped from the roof, landing quietly on the road. Immediately the man spun, lifting an arm in a warding gesture.

“I mean you no harm. Settle down.” Jamie kept his hands open at his sides as he straightened to his full height.

The guy took a few steps back, seemed to realize that the move proved him a pussy, and stopped. “What do you want?”

Jamie had him pegged as less than a year in the immortal world. There wasn’t a chance he’d seen battle. Not with the innocent face and wide-open eyes.

“Who were you talking to?”

No response, but no aggression either at the slight. Young, possibly less than six months turned.

“Did you know turning Vampires was against Aidan’s laws?”

Still no response, but the guy gave his head a slight shake to get his dark hair out of his eyes. It was either wet from the constant drizzle, or greasy. He smelled clean. No stench of blood clung to him. If he’d sampled recently, it wasn’t within the last twenty-four hours. He smelled too clean.

“Who are you?” he asked, stepping away. He was elegantly dressed, as if he’d come from a black tie affair, but without an overcoat to protect his suit jacket, which was getting soaked.

Jamie walked closer until only a few feet separated them. “My name’s Jamie. What’s your name, kid?”

A brief wait and a clearing of the throat, then he said, “David.”

“You’re new to this world.”

Another hesitation, then a nod.

“Tell me, if that wasn’t your maker, who is? You’re new to Vampire. What were you before?”

The guy licked his lips and nervously glanced down the alley. There was something off about him, a clinical smell as if he’d gone and washed at a hospital. It didn’t add up.

“He’s gone. I can scent him. He’s back in the city, near the bay. Why not talk? I already assured you I won’t kill you.”

A feral light brightened his eyes then was gone so quickly Jamie wondered if he’d imagined it. “I’m just a guy. A Vampire—”

“You aren’t only a Vampire, you’re more.” Jamie drew in a deep breath, walking a circle around him. There was something there, something… He almost thought not right, but dismissed it as quickly as it had surfaced. The man wasn’t a Death Stalker. He was alone, and that stench was difficult even for the mages to hide.

Again, the man shifted nervously. “I… I’m not sure what you mean.”

“Are you French?” There was something there, not an accent but something. A quick shake of his head was the only answer Jamie received. He let it go. “Look, I don’t know who you are. He wasn’t my maker, just…someone I know.”

“How many Vampires call Seattle home?”

Eyes widened when Jamie drew closer, he stuttered, “What?”

“Do you know all the Vampires in this area?” Jamie stepped closer and watched his eyes. He was going to try to mist, or run. Not allowing that, Jamie reached out and drew him closer by his neck. “Do you know what happens to a Vampire when they run from a wolf?”

David tried to shake his head but Jamie tightened his grip. “They die.”

The guy nodded, or tried to, but ended up making a lot of gurgling noises.

“A girl, fresh Vampire, young, a dancer,” Jamie said watching his eyes shift to the side, then back at him, only to shift away again. Nerves or something more? “Was she here recently?”

This time his eyes did register something. Jamie just wasn’t certain what. “I think so. I think I’ve heard of her. I never saw her. She hides. She’s good at hiding,” he added quickly when Jamie frowned.

“Why would she need to hide?”

Just what Jamie had thought. “Any idea what direction?”

“Find her. Yes.” Jamie thought about what he did know of the girl. She was newly turned, less than ten years. What would she do? “Did she have friends? Vampire friends?”

“She knew very few. She was a loner.”

David tensed. His eyes narrowed as if he’d never considered such a question.

Jamie had. Over the past few weeks, the urge to find her had gone from a mission to an obsession. Every glimpse of her, every hint of her scent, drew him. He was worried about when he did find her. Will I lose this urgency? The constant anxiety? Or will it grow?

“She did have a human friend.” David nodded, eyes flashing light. Did he sense how much Jamie wanted this information? “Bobby something. Simon, I think. He was in her dance troupe.”

Jamie didn’t ask how the guy knew that, or even for more. It was enough. And what if Bobby Simon was her lover? It was good that Jamie had dropped the hold he’d had on David’s throat. If he hadn’t the Vampire would be dead. Jamie’s fists clenched. If this Bobby had sampled her pale pink lips, his days of doing so were over.

Share what you thought about Keeping his Heart and earn reward points.