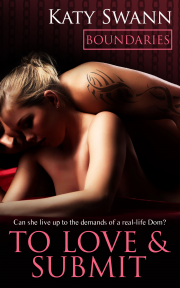 To Love and Submit

Rachel Porter’s dreams of being dominated are finally about to come true.  But can she live up to the demands of a real-life Dom?

To make matters worse, when she learns that Adam’s ex-wife was, in fact, his slave, she realises that she might have to give up more than she’d bargained for if she’s to remain his submissive.

Reader Advisory: This book is best read in sequence as part of this serial.

Rachel moaned indulgently as the man slid easily into her deliciously wet pussy. He was big, so very big, and as he filled her with his long, thick shaft, she wondered briefly if she could take the full length of him as he pushed himself farther into her. Just when she thought she would burst, though, he pulled slowly out and a slight hint of a smile appeared in his eyes as they commanded her to surrender to him completely. Desperate to feel him inside her again, she tried to pull him back, begging him with her eyes to take her. Just as she raised her hips urgently towards him, he plunged deeply back into her, filling her completely and making her cry out with pleasure.

“Good girl,” he growled, “let me hear you scream.”

“Yes, Sir,” she cried, knowing he would be expecting her to respond and, as she did so, he rewarded her with a harder, deeper thrust. She wanted to touch him so badly, to run her fingers along his perfect, muscular body and, in a desperate attempt to get closer to him, she tugged at the cuffs that bound her wrists to the rail at the head of the bed. She soon forgot about them, though, as she felt a sharp slap on the side of her thigh and the desperate need in her intensified as her body responded with a delicious shudder.

“Again?” His voice was rich and deep, and behind the hard line of his lips lurked a smile that promised more delights to come.

“Yes please, Sir,” she whispered, her voice now hoarse with emotion and lust.

“Pardon? I didn’t hear you.” Another slap and her body quivered uncontrollably in response to the hot sting his hand left on her buttock.

“Yes, yes, yes…” she cried. But then, devastating reality began to force its way into her consciousness as she slowly woke from her dream. “Yes… Oh, shit!”

She sat up in her bed, painfully alone and very aroused. Shit, it had felt so real, his voice, his body, everything. She rubbed her wrists, fully expecting the marks from the cuffs to be visible but, of course, there were no marks, no cuffs and no gorgeous man demanding her compliance.

Rachel sighed, resigned once more to gratification thanks to her trusted and reliable Rabbit. As she reached under her bed, she tried to conjure up the image of the strong lover who had just been ravishing her in her dream. This was the fifth time she had had this dream, always with the same man, and yet she could never recall his face once she woke. No matter how hard she tried, he remained an elusive fantasy only willing to appear in her sleep.

She moved her hand down under her duvet and quickly checked that she was nice and wet for her battery operated lover. Yep, she was definitely ready and she quickly slipped the cold, hard device into her wetness then flicked the switch. Nothing happened. She pulled it out again and fumbled with the various settings, but still it remained stubbornly silent and still.

Shit, shit and double shit, the fucking batteries were dead. This was not a good start to the day, she thought, as she reached down to finish with her fingers.

Half an hour later, she stomped into the kitchen, now showered and dressed, and grunted a half-hearted greeting at her flatmate, Mandy.

“What’s the matter with you?” asked her friend with a smirk. “From what I heard, you should be grinning like a Cheshire Cat.”

Rachel stared at Mandy in shock. “What?”

“Sweetie, the walls are very thin in this flat, in case you didn’t know. Either you’ve got a secret lover hidden away in that room of yours, or you’ve been playing with your bunny again.” Mandy winked at her and handed her a cup of fresh coffee.

Rachel sighed. “I had that dream again, you know, the one where this gorgeous man straps me to the bed and has his wicked way with me? Well, it’s getting more intense.” She took a sip of her coffee and felt a shiver run through her body as she remembered the feel of the cuffs holding her arms above her head. It had felt so incredibly sexy, and yet she wasn’t normally into kinky stuff like that, so it didn’t make sense that she’d be having such erotic dreams about it. The trouble was, now that the idea was so firmly planted in her head, she couldn’t stop thinking about it and the more she thought about it, the more the idea of being tethered to a bed and at the complete mercy of a strong, dominant man excited her.

Mandy stuck some bread in the toaster and came to sit next to Rachel at the small kitchen table. “What you need, my friend, is a man. One who’s into the same kinky sex as you.”

Rachel nearly choked on her coffee. “I am not a submissive. I’ve never been tied up in my life for God’s sake!”

“Except in your dreams.” Mandy got up to retrieve the hot toast as it popped up. “All I’m saying is, you’ve obviously got this hot fantasy and there’s no smoke without fire and all that shit. Toast?”

Rachel took a slice of the slightly blackened toast and stared at it absently. “Yeah, but the way I’m going I’ll never meet anyone and, even if I did, they’d probably run a mile if I hinted that I might want to experiment with a bit of bondage.”

Mandy chuckled. “I wouldn’t count on it. Most single, straight men would jump at the chance of tying up a gorgeous woman and fucking her senseless.”

Rachel laughed at her friend’s rather crude but probably accurate statement. “Well, I don’t know any single, straight men, except for Mike Jones at work.” Mike was the Facilities Manager who had been harbouring a crush on her for months. He was very sweet, but middle-aged, overweight and had a serious BO problem.

Mandy’s eyebrows shot up. “You have got to be joking! Okay, babe, we’ve got to get you sorted before you end up shagging the likes of Mike Jones.”

“Yes, but how? There’s no way I’m going to some seedy club to pick up a complete stranger.” Taking a bite of the toast, Rachel shrugged. “Even if I was that desperate I wouldn’t want the risk of picking up some nutter.”

I found To Love and Submit to be a fun sexy read that I thoroughly enjoyed. The two main characters are well written and completely likable. Their story will grab you and leave you wanting more becau...

The chemistry between Adam and Rachel is scorching.  The sex scenes are blistering.  The more Rachel learns from Adam the more she craves his control. They are a great mat...

Share what you thought about To Love and Submit and earn reward points.

Katy Swann - Interview for To Love and Submit

To be honest I didn’t really have any expectations as the books came about almost by accident.  As I said before I hadn’t originally intended to write a full length novel — it just happened.  I thought I might have been a bit embarrassed about writing the explicit sex scenes but actually, it’s not been a problem at all.  One minute I can be writing a scene where the heroine is tied to a St. Andrew’s cross being flogged by a masterful Dom and the next I can be chatting to another parent about school dinners or something equally mundane.