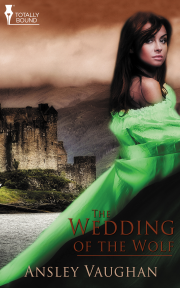 The Wedding of the Wolf PRINT

Cool and elegant Eloise is tired of always being tagged as the good and respectable one, until a project to organise a wedding in Tuscany brings her into contact with a Mafia boss, an undercover police agent, a compelling, irascible Count…and a sexual experience which will change her life.

When Eloise Lambert agrees to plan a society wedding in Italy for an old school friend, she's quite unprepared for the complications. There's the red tape, the bride's interfering mother and the fact that the groom is rather less than willing.

Add to that the problems she encounters with the owner of the castle where the wedding's taking place, the handsome but bad-tempered Count, and her relationship with his difficult young family. Then there are the distractions of her actor boyfriend, a watchful and attractive British police agent, and a lustful Mafia godfather.

Eloise's emotions, and her sexual desires, are challenged and exercised as never before. Then she's drawn into re-enacting an ancient ritual, The Wedding of the Wolf, which makes the choices she has to make even more difficult and winds up the sexual tension to almost unbearable levels.

The Wedding of the Wolf

In a bright room in Covent Garden, a woman worked at a keyboard, sighing occasionally. The computer was built into a mock eighteenth-century desk and at the flick of a switch could be hidden to create the illusion of a clear surface. Obviously, this was a place of business, but furnished in the manner of an elegant drawing room. Veneered cabinets concealed files and stationery, velvet curtains flanked the long windows and the smart carpet had a muted pattern. A chaise-longue and some imitation Louis Quinze chairs completed the furnishings.

The woman matched her surroundings. Beneath dark auburn hair pulled back into a chignon, her pale oval face was discreetly made up. She wore small pearls at her ears and throat and plain glasses masked green eyes under arched brows. Her suit of burnt orange toned with her colouring, the fitted jacket long on her hips, the knee-length skirt pencil thin. Slender legs and brown stilettos completed the outfit.

The door opposite her opened and a young man looked in.

"Eloise, I just got a call from Lady Connaught. She's on her way."

"Good. Thank you, Jamie. Though why she should phone ahead when she's already made an appointment, I don't know."

"Perhaps she wants to make sure we've got the red carpet out."

"I'll dig out the best china!" he said with a laugh and went out. Eloise got up and moved gracefully over to the window.

The view from the first floor room was of a narrow London street, clogged with cars and taxis. Throngs of tourists made their way to the Piazza, just visible to the left.

She stood with a hand on each of the velvet drapes. She could see her reflection in the glass and she sighed again, wondering what on earth she was doing in this parody of an eighteenth-century drawing room, waiting to butter up an appalling woman. And knowing that failure meant ruin.

Another door, concealed in the wall behind the desk, opened, not gently this time and in burst what looked like a very big cat. On closer inspection, Eloise realised it was a woman wearing cat ears and a painted face with a blackened nose and whiskers. A basque-like garment in tabby-coloured fake fur thrust her breasts upwards and outwards and her arms were covered in long tabby gloves. Her legs were encased in fishnet tights and her feet in high black heels and as she pranced into the room, visible behind her was a swinging tail. She looked startlingly out of place amid the restrained elegance of her surroundings.

Despite her anxiety, Eloise laughed. "Stunning!" she agreed. "But you'd better get out, Lady Connaught will be here any minute and the sight of you would send her out into the street screaming blue murder."

"Fine." The other woman swished her tail behind her with one hand. "That's how I feel about her."

"God, Sammy, we need her. If I can land this contract we may just be able to save the business."

"Nothing downmarket about Show-Offs. But if Lace Dreams goes down, it'll take everything with it."

Sammy patted Eloise's shoulder with a furry paw. "I know, darling. You'll be brilliant. But don't let her tell you she's got lots of other agencies bidding for this wedding. I met Mandy from Brides' World the other night and she told me La Connaught was impossible. They parted on bad terms. I know she's been doing the rounds."

From the door into the outer office they heard a loud female voice.

"That"s her! Quick, get your pretty pussy out of here!"

The cat scampered off towards the hidden door, only just reaching it as Jamie ushered in a well-dressed blonde woman.

"Lady Connaught, how very nice to see you again!"

"Ah, Eloise," the woman drawled, and made a kissing sound either side of her cheek. "You know my husband Lyndo, don't you?"

Sir Lyndo Connaught was a bluff businessman, who had earned his knighthood by building a small engineering firm into a huge international conglomerate in the days when he was plain Lindsey Connaught. He ignored the hand and planted a smacking kiss on her lips. "Little Eloise! It's been a long time"

"Indeed," his wife interrupted. "But we mustn't waste time. Sit down, Lyndo."

Eloise looked hopefully towards the door. "Isn't Tamsin with you?"

"No, she's got some frightful horsy thing to go to. Anyhow, she wants me to do all the field-work."

Eloise reflected that Lady Connaught was unlikely to let her daughter have much say in the arrangements for this wedding. She was pretty sure that her ladyship was taking her responsibilities as the mother of the bride so seriously that she'd been largely responsible for choosing the groom. She motioned Sir Lyndo to a chair and sat behind the desk, noticing out of the corner of her eye that the hidden door was slightly ajar and the tip of a tabby tail was protruding from it. The door opened slightly, the tail was whisked away and it shut again quietly.

Eloise suppressed a growing feeling of hysteria. She put on her glasses and opened a folder on the desk.

"If you'd like to give me an idea of your requirements, I'll take some notes. I think Tamsin showed you our brochures?"

"Yes, thank you. I should tell you at once, Eloise, that I am seeing several different agencies-rather grander ones than this, I might add," she added, looking critically around the room. "But I agreed to give you a chance since you and Tamsin were at school together."

"Thank you, I appreciate it."

"I will expect whoever takes this on to be responsible for every aspect of the wedding. Venue, ceremony, clothes, reception - everything."

"And I envisage a full-time commitment. This is a big society wedding - Lyndo has a reputation to maintain. We want it to go like clockwork."

"I understand. But having one consultant working full-time would mean considerable fees?"

Lady Connaught waved one scarlet-nailed hand, laden with diamonds. "That's not a problem. Lyndo will sort all that out."

Sir Lyndo opened his mouth to speak, then thought better of it and contented himself with nodding benignly. His wife patted her improbably yellow shoulder-length hair. "And of course, I'll be available for guidance and advice."

There was always a downside, Eloise thought but she nodded and smiled.

"Right, let's get down to business. First can I offer you something? Tea, coffee, wine, sherry?"

Ansley Vaughan is a journalist, who has worked in print, radio and television news. She read history at university and trained as an actress.

Ansley Vaughan has lived in France, Italy and the United States. Her passion is travel, and if she can just get to Antarctica will have visited every continent. She lives in London with two extremely naughty dogs.

Share what you thought about The Wedding of the Wolf PRINT and earn reward points.