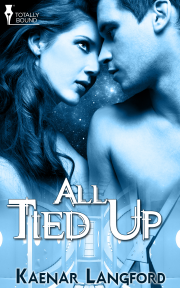 As a government agent, Naymeen Renaud's mission is to belay Aiden Blackshott's role in treasonous activities. So how does she end up in the wealthy businessman's playroom, tethered for his pleasure?

Captain Naymeen Renaud's current assignment for the United League of Veluvian Planets is to thwart any contact between forces hostile to the League, and wealthy industrialist Aiden C. Blackshott. But she soon finds herself straddling a line between duty and lust. She loves it when Aiden captures and pleasures her in his sex playroom. But she suspects her new lover has ties to her former partner, now a rogue agent, she has sworn to bring in.

Aiden also has a mission, one which threatens to fall apart when Naymeen appears the very evening he will play his final role in his assignment. When he allows her to kidnap him to keep her from upsetting carefully laid plans, she whisks him to her star cruiser and ties him to her bed so she can return the favour. She wants to believe in him, but in the end, is he betraying her just as her comrade did?

Reader Advisory: This book contains scenes of pleasure through bondage.

From her place of concealment deep in the shadows, Naymeen watched the little man nervously pace the tiny landing bay. It was obvious, from the way he stayed out in the open, he wasn’t a soldier. No soldier would have made himself such an easy target. Lucky for him, no one was even aware of his arrival. Lucky for him—but luckier for her.

He whirled as she moved forward from her hiding place. A look of alarm crossed his face as he took in the black torso armour and the gun in the holster on her hip. His voice trembled as he spoke. “You’re not the person I’m supposed to meet.”

She shook her head.

She snorted at his attempt to put some distance between them and advanced on him.

His face paled, the colour leaching from his flabby skin. “Are you here to kill me?”

He didn’t know that wasn’t to be his fate, that he was only a means to an end.

A tight smile lifted her lips. Yet it must have done little to reassure him, as his voice quivered when he asked again, “Are you going to kill me?”

She gave him his reprieve. “Not this time.”

He looked relieved—but not for long.

“I’m well aware you’re here from Jaehdang,” Naymeen went on, “a planet that is under sanction by the United League of Veluvian Planets, to enter into clandestine negotiations with Mr. A. C. Blackshott, one of the wealthiest men in the galaxy. Therefore, you are definitely persona non grata here on Gheldar.”

If possible, he grew even whiter as she revealed the details of his supposedly covert mission.

“Do you really think the League would allow a meeting to take place between an envoy from a hostile planet and a man with an unlimited cash flow?” Naymeen shook her head for emphasis. “It just doesn’t seem like a good thing. So that’s why I’m here.”

Her leather boots nudged his fancy shoes as she invaded his space. “It’s my job to encourage you to go back home. Or, if necessary, persuade you a bit more forcefully.”

Now she was afraid, from the look on his face, the poor creature was going to faint.

“I’m not a killer, Mr. Chengalie. At least, not this time.” He started, but whether at her use of his name or at the reference to her status as a ‘sweeper’ for the League, she couldn’t be sure. Yet she wondered why he was surprised. It was obvious she knew everything about his task, and it also was obvious that, considering whom he was meeting, the League would send in an enforcer, a cleaner-upper of the situation, as it were.

Naymeen was still annoyed they hadn’t allowed Blackshott and the envoy to get together so she could find out the purpose of the meet, but the group seemed more concerned with prevention. She knew that kind of short-sighted thinking often came back to bite one in the arse—with a vengeance. She hoped they were prepared for that possibility.

But now, it was time to perform her duty. “Let me put it to you this way. It would be better for everyone, especially yourself, if you were to turn around and head back home without delay.”

As the realisation apparently took root in his brain that her purpose really was to rout but not kill him, a smidgen of boldness crept into his backbone. He puffed himself up in protest. “But I can’t leave.”

Naymeen wanted to laugh at his sudden burst of indignation. “Anyone from a sanctioned planet is banned from Gheldar—and from every other planet within the jurisdiction of the League. You need to leave, immediately.” 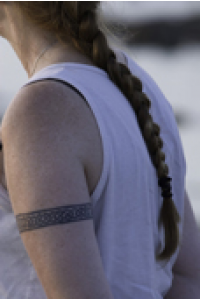 Although born in Ireland, Kaenar Langford lives north of Toronto in rural Ontario, but that doesn't stop her from travelling the world in her mind and in her books. The love of romance and the exotic, as well as a decidedly off-beat sense of humour, are all entwined to produce stories that will not only seduce you, but also make you laugh.

Kaenar enjoys playing music and reading and has taken up the Scottish small pipes in the last few years. Of course, Irish music is what she loves to play.

I love a good story where the heroine is not afraid to kick a little butt, and knows how to get what she wants...ALL TIED UP is a very well written steamy romp through the cosmos, with an excellent...

Oh my, ALL TIED UP is one heart pounding ride from start to finish...I highly enjoyed ALL TIED UP and look forward to reading more from this author. Run to grab ALL TIED UP...

Share what you thought about All Tied Up and earn reward points.