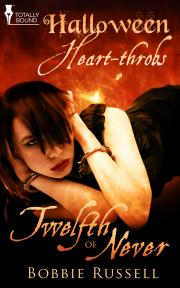 Author Zoe Shepard races away from an unfaithful lover in the States only to fall into the arms of a spirit in Ireland. While she has no intention of allowing another faithless male in her life, she doesn't mind this particular man because he demands nothing and night after night he gives her incredible climaxes. It isn't until the full moon that Zoë actually meets Keegan McFallon, knight and lord of clan McFallon, in human form.

Because of a sorceress's spell, he's doomed to remain in the spirit world, except on the nights of new and full moons, until he has an orgasm on the Twelfth of Never. Unfortunately, that is a riddle he cannot seem to solve. Keegan, with his long blond hair, broad shoulders, and constant hard-on, is so much better in the flesh than in spirit form that Zoë sets about trying to discover how to release him from the sorceress's spell. In the meantime, she decides to write his story, but…

Who's going to believe a story about a five hundred year old spirit who has to orgasm on the Twelfth of Never to return to mortal form?

Zoë turned the ancient skeleton key, shoving her shoulder against the huge oak door when she heard the lock click. Hoping the realtor had gotten the cottage cleaned as she had instructed, she dropped her suitcases just inside the door, utterly exhausted from the transatlantic flight.

Colleen Bannon, the realtor, had said the electricity couldn’t be turned on until Monday, and this was only Saturday evening. She was too tired to explore the rental, but there was just enough light from the setting sun for her to make out large, sheet draped objects in the room off to the left of the entryway. She wrinkled her nose at the musty, closed up smell that permeated the hallway. It was no wonder she had gotten the place so cheaply. She dug in her backpack for a flashlight then wearily climbed the stairs. This place didn’t look, or smell, as if it had been lived in for...forever.

Mentally following the floor plan she had seen on the internet site, she turned at the top of the stairs. Bathroom on the right, bedroom at the end of the hall. The loft bedroom was supposed to overlook the lake, and she hoped it did, if only to provide her the peace she needed. Setting her flashlight on a small round table against one wall so it pointed at the bed, she quickly pulled off the faded comforter, folding it inward to keep any dust trapped. In minutes she had a set of clean sheets spread across the huge bed, then stripped out of her travelling clothes and pulled on a T-shirt. As soon as her head hit the pillow, she fell into a deep sleep, thoughts of home and heartache temporarily forgotten if only through her deliberately imposed exhaustion.

Warm breath caressed her bare stomach, and Zoë kicked off the sheet to better feel the exquisite touch. Seconds passed and she held her breath, wanting more.

“Please,” she murmured, not sure what she was begging for, but knowing she wanted it, needed it, to take away the pain. “Please.”

Butterfly light kisses skimmed from her toes up one leg, pausing at her knee when a hot tongue snaked out and licked the sensitive skin before travelling along her thigh. Calloused hands pushed against her thighs, and she spread her legs willingly, the ache building in her sex. The instant a rough tongue touched her clit she arched, a moan coming from deep in her throat. His mouth was hot and wet, devouring her, nibbling on her clit and then sucking, taking her to the edge of an orgasm where she hovered and then crested, her pussy clutching in need, every nerve ending throbbing.

His touch continued across her stomach and then upward, licking the underside of one breast before sucking her nipple into his mouth. The aftershocks of her climax continued as he milked her, first one breast then the other, her entire body tingling as though a thousand feathers touched every inch of her skin. There was no weight against her chest, no hard muscles pressing her hips down into the bed. Only the constant, lingering touch, as light as the breeze from the window, but igniting her need and feeding her hunger. His fingers pinched her nipples, the pleasure/pain shooting through her. She planted her feet on the bed, pushing her hips up against him, spreading her legs as wide as she could to take the invasion of his cock as he entered her. He was enormous, his thickness stretching her beyond anything she had ever felt and yet she took him all, feeling the tip of him buried deep as his hips ground against hers, his balls slapping against her ass as he began to pump into her.

She felt his breath against her temple, his hand sliding between their bodies and opening her lips so his cock rubbed against her clit every time he moved in or out. She pushed, her hips arching off the bed as another orgasm slammed through her, the effect so strong she cried out.

Zoë shot straight up in bed, gasping as her pussy continued to throb with the after effects of an incredible dreaming orgasm. The room was pitch black, and for a minute she had no idea where she was. The only thing she knew for sure was that she was naked. She felt around the bed and found her T-shirt, struggling into it as the breeze chilled her aroused skin.

Stumbling out of bed, she felt along the wall until she came to the table, grabbing her flashlight. When she flipped the switch, it was to find the room empty. She turned quickly and swung the light to the windows, which she saw were closed, exactly as she had left them. Then where was the breeze coming from?

Twelfth of Never is a charming story of Halloween Magic. Bobbie Russell weaves her tale intricately and beautifully. Full of steamy scenes, this story is sure to please.

Share what you thought about Twelfth of Never and earn reward points.