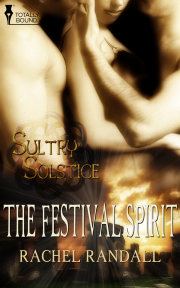 Johnny's well-known for his uninhibited performances, and his electrifying show at the summer's biggest music festival leaves fellow popstar Mira desperate for a more intimate performance. It looks like her lust will finally be satisfied—and if his bandmate Lee wants to join them, so much the better.

But Mira's not the only one who wants Johnny. A greedy fairy queen, angry that the festival is being held in her realm, takes the submissive frontman captive. Armed only with the power of her own passion, Mira must face the dangers of an enchanted forest—and confront her darkest desires—in order to take him back for herself.

Reader Advisory: The story contains M/M intimacy, though no penetration, as well as a storyline of dubious consent. There are light instances of dominance/submission.

Her wings were gossamer-thin and a delicate gold. They caught the late afternoon sun, scattering flecks of light to dance across her dark, choppy hair and mingle with the freckles on her burnt shoulders.

Mira winked at the guard standing by the gates, cocking her hip and letting the frothy skirt of her frock swing teasingly towards him. That won her a big smile. Good. No one should frown on a day like this, she thought. Not when it was so glorious.

It wasn’t just her beautiful costume that had her mood soaring. The weather was incredible, not a rain cloud in sight—nearly unheard of for the world-famous Irish music festival. Her set had gone well enough that she’d already been invited back next year, and on top of that success, it was her last gig of the tour, meaning she could finally let loose and relax for a few months before she hit the studio again. She already felt lighter with the freedom from responsibilities, as though the wire and gauze of her wings might actually allow her to fly.

Johnny and Lee were here, her biggest reason to smile. At just the thought of them, her lips curved wider and she shivered in pleasurable anticipation. And best of all, it was the summer solstice—the longest day of the year—which meant that every second of its glory could be enjoyed to the hilt.

Mira definitely meant to enjoy it.

The lighting rig—their rendezvous point—was off to the side of the stage in the quieter zone between crowd and crew. It towered above the festival grounds, taller than everything save the dramatic backdrop of the trees in the forest. At its base, Mira slipped out of her shoes and put a bare foot on the base of the ladder. The metal was cool on her soles and her toes curled happily against the rungs as she began to climb. Near to the top—endless, cloudless sky—the breeze caught her wings, tugging her backwards.

Rachel Randall successfully pulled me into the settings she created and allowed me to feel the desire controlling Mira throughout the novella...I would eagerly read more work from this talented author....

Share what you thought about The Festival Spirit and earn reward points.