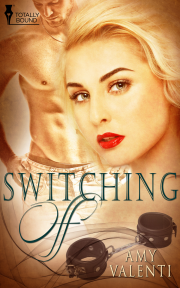 With his collar around her throat and her pulse pounding through her body, can she switch off enough to submit to his every whim?

Nina loves her job in middle management-her dominant personality and organisational skills make her indispensable to her employers. But, when her boss puts too many demands on her department, she finds it impossible to leave her job at her desk and enjoy her weekend with her sexy best friend, Jon.

When Jon takes away her phone and tells her she's not allowed to check her emails until Monday morning, Nina challenges his right to order her around. His response is to kiss her into silence, then to order her to her knees. What's even more startling is that Nina finds herself obeying-though not without a fight.

Can Jon succeed in getting Nina to switch off her managerial self as well as her phone? Or will she safeword before she can reach the sublime subspace he's promised to guide her into?

Nina was seething. More than seething. She was stressed, tense and so restless she could hardly drive her little red Mini through the rush-hour traffic without bashing the heel of her hand down on the horn.

"For fuck’s sake!" she muttered as a Jeep careered into the spot just ahead of her, forcing her to slam her foot down on the brake. After the day I’ve had, it should be illegal to piss me off.

As yet another light turned red just as she reached it, her cell phone rang. She snatched it up off the passenger seat, knowing she shouldn’t answer but not really caring. "What?" she snapped, not having bothered to check the caller ID.

Nina felt her shoulders relax slightly at the sound of Jon’s voice. He was one of the calmest people she knew—it was impossible to make him lose his cool, no matter how fraught she got. "To be trying to get onto the freeway? Yeah."

He laughed softly, the masculine sound sending a shiver down her spine despite her irritation with the world. "Yeah, I heard it’s jammed today. Bad luck."

"What, did you call to gloat at my misfortune?" she asked, annoyed at herself for wanting what she could never have. Jon was a friend. Just a friend. Nothing more. And that was the way it worked—right?

"Actually, I called to ask if you were doing anything tonight, besides pacing around your house and sticking pins in voodoo dolls."

The lights changed and Nina drove on, hoping no law enforcement equipment or personnel would catch her on her phone while she was behind the wheel of a moving vehicle. "I don’t own voodoo dolls. Yet. What did you have in mind?"

"I’m in the opposite direction of the rush-hour traffic if you want to come over. I have a pasta bake in the oven I don’t mind sharing..."

Nina’s mouth watered but, as another asshole tried to cut her off, she swallowed a string of expletives with an effort. "I’d love to, but I’m really not fit for polite company tonight."

"I can handle you," Jon said, and his casual confidence made her want him to do just that—or else let her handle him. "The offer’s there, if you want it."

Staring at the long line of cars ahead of her, then glancing over to the practically clear lane heading in the opposite direction, Nina felt her determination to get home crumble. "I’ll be there in fifteen."

She hung up, tossed the phone back onto the passenger seat and reversed a fraction, flipping the bird to the guy behind her as he leaned on his horn. Peeling away from the line of lemmings heading for the freeway, she accelerated with the first genuine smile she’d been able to muster all day.

If you are in the mood for a very alpha male who knows how to put his sub in their place (that's subspace) then pick up this book quickly. As the days here in the Midwest are getting cooler this...

Share what you thought about Switching Off and earn reward points.