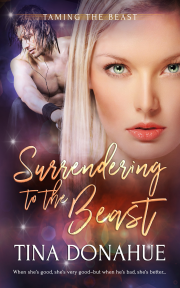 Surrendering to the Beast PRINT

Book 2 in the Taming the Beast series

It’s definitely not business as usual at From Crud to Stud, a makeover service for supernatural beings. Dare we say it? Receptionist Heather—a good fairy with a pure heart, mind and body—is on the fast track to exquisite corruption with Daemon, a satyr.

Sex has never been this good or adventurous. Half-man, all beast, Daemon’s the ultimate bad boy, a follower of the god of wine and a good time. Before, during and after his makeover to look fully human, he intends to put some color into Heather’s pale cheeks.

She’s one conflicted but turned-on babe. Especially as Mistress Jin, a genie Daemon commands, agrees to show Heather how to cut loose. Under the mistress’s tutelage and Daemon’s shameless lust, Heather’s gonna find out what love and having fun is all about.

Warning: Not your typical bedtime story. May lead to indecent behavior, a taste for voyeurism, discipline and bondage, which will result in screaming orgasms. Proceed with caution.

Publisher's Note: This book was previously released elsewhere. It has been revised, reedited and expanded for release with Totally Bound Publishing.

Her personal mantra, gained from countless self-improvement books, online courses and seminars she’d attended. The writers and sponsors always promised the programs would make her a new woman in business, life and love.

As a good fairy, that wasn’t likely, but she needed all the help she could get. Born to be kind, patient, sympathetic to a fault and purer than the driven snow, she simply wasn’t assertive enough during work hours or on the dating scene. Not that she’d ever tried to hook up with guys. Even thinking about talking to one in a romantic sense made her dizzy enough to pass out. Since none had flocked to her on their own, especially the shy ones who’d prove non-threatening, she was lonely and wanting.

That left her career to fill the endless hours where her innate personality still got in the way. Always, she feared hurting someone’s feelings no matter the consequences to herself, her BFFs or the business where she and they worked.

Serving as the receptionist and healer at From Crud to Stud, a New Orleans makeover service for supernatural beings, was a monumental undertaking. She had an honor-bound duty to make certain the clients left there healthy and hearty, that their appointments were up-to-date and that they never stiffed the service on money they owed. Being an overdue bill collector was the hardest part of her job description.

But it had to be done. Right now. She’d delayed too long on this account and only had herself to blame.

Nausea rolled through her as she steeled herself to do battle with Satan. To her horror, her Skype call to him connected instantly. Her vision dimmed but she faced her webcam and his image on her computer monitor.

This evening, he resembled a European playboy, a cognac snifter in one hand. He’d slicked back his dark hair and wore a blood-red ascot that contrasted nicely with his white shirt and navy blazer.

For a bad guy, he certainly knew how to dress.

“Cara mia.” Heat smoldered in his voice and dark eyes. “What can I do to you?”

She wanted to hurl but gave him her sternest look. “I’m sorry, I don’t mean to correct you, but I think you meant for me not to me.” He never got the phrase right.

Grinning, he focused on her white peasant blouse and jutted nipples, her areolas tightened from the chilly weather, not him. Tonight was damp and cool, thanks to a spring storm that raged in the French Quarter. Lightning flashed. The office lights flickered. Just like in a slasher film.

Flames flared briefly in his pupils.

They didn’t calm her apprehension.

He leaned closer to the screen, his eyes boring into her. “We’ll do many things to each other, no?”

Heather would have given anything to flee but pretended she hadn’t heard his vulgar question. A knee-jerk reaction for someone with her genetic makeup. Needing to get tough, she held up his overdue bill and hoped he’d look at it rather than her chest. Her hand shook so badly the paper rattled.

“How you tremble,” he cooed. “How pale you are. Allow me to put some color in your lovely cheeks. Heat that will last an eternity.”

Her skin grew clammy. “Please, just pay your account.” She waved the paper and prayed she wouldn’t lose her nerve. “Your grandson failed to show for his last two appointments. I’m sure he had a good reason. Unfortunately, he didn’t call to cancel. Because you’re the cardholder, we had to charge you for the time. I’m so sorry, really I am, but it is the rule.”

One she was obligated to enforce to keep this place solvent and humming. In the treatment rooms, vampires hissed, weres howled and demons snarled obscenities. She cringed at that awful language but understood their pain and the others’ agony, too. These poor souls suffered proverbial hell to suppress their beasts so they could date mortal women without freaking them out, while also winning their hearts the normal way. With real charm, not magic. With integrity and love, not lies and manipulation.

Those miracle transformations didn’t come easily or cheap. They took the staff’s valuable time and clients needed to pay for the effort. Even Satan should understand such a simple and fair concept.

He offered an indulgent look. “What charges?”

His bill burst into flames.

Heather gasped and dropped the paper in her trashcan.

“Later.” He killed the call.

She smothered the small blaze and chided herself for not having been firm with Satan’s grandson when he’d signed up for the service. Determined to make up for being too nice, she brought up her bank account to pay the charges herself. After that, she’d book a spot at another assertiveness training workshop. One had to do the trick for her. Clinging to that hope, she filled in the required spaces on her online payment form.

It banged against the wall.

Dank air and rain blew inside, followed by a guy who looked to be thirty or so. He wore a black cowboy hat, snug navy tee, low-slung jeans and cowboy boots.

He shoved the door shut, slumped against it and breathed hard.

Heather shot to her feet. Her chair rolled into the numerous potted plants behind her.

He didn’t notice. His eyes were closed, face raised to the ceiling. His prominent Adam’s apple bobbed from his hard swallow.

Although alarmed at his entrance and who he might be, she was also intrigued. Something that had never happened before when it came to a guy who might not be a customer here. On those occasions, she’d always hurried in the opposite direction.

Her legs refused to move.

Short, dark hairs dusted his throat. Rain dampened his cocoa-colored hair. Those thick, wavy tresses flowed to his broad shoulders that heaved with his ragged breaths. Tall, six-three or so, he was nicely muscular.

Virility she found protective rather than daunting.

His wet tee clung to his well-defined pecs and abs, those bruising biceps. His bronze skin betrayed an outdoorsy nature rather than a guy who spent his days working indoors.

His scent wafted toward her. A fresh and woodsy fragrance, along with an unmistakable beer or wine odor.

Her panic flared. It wasn’t often that mortals, drunk or otherwise, happened upon this place. When they did, she had ironclad rules to follow. First, buzz Constance, her BFF who was also a voodoo priestess. Given Constance’s power, she could remove memories by laying her hands on someone’s head. A necessary evil so the mortal world would never know what went on within these walls. Following that, Heather was supposed to notify Becca, also her BFF, and a half-mortal witch who owned this place.

She leaned over her desk to press the intercom button.

The guy turned to her, blinked and stared.

His eyes were amazing, the color of Lipton tea, ringed by long, sooty lashes, his attention riveted as he drank her in. Given his slow, sexy smile, Heather suspected he undressed her with his eyes.

Her skin burned worse than it had when she’d faced Satan, yet this heat felt good, like comfort and excitement combined. She hadn’t a clue why that would be and didn’t have time to figure it out. She needed to get the others up here.

The agonized sound surprised her. Her empathetic nature kicked up several notches. “Are you all right?”

“Fuck, no,” he panted. “These pissing boots are killing me.”

They were as masculine as him, the tooled black leather sporting thick silver buckles. Although they weren’t refined or gentlemanly, she liked them. Now, his language…

“I gotta sit down.” He lurched to her desk.

“No. Please.” She held out her hand to stop him. “Go back outside and—”

An ear-shattering howl ripped through the office. Roaring thunder followed. The were wailed away.

He stared at the hall and the treatment rooms beyond.

Too late now for him to waltz out of here with his memories intact. Heather felt bad about that but had to do the right thing for her friends and the service. “Let me get Constance.”

His legs bowed. “I need to take a load off.” He eyed her chair.

She raced toward him without thinking, desperate to block him from commandeering a seat. Her forehead barely reached his shoulder and he also outweighed her by ninety pounds or better, but she couldn’t let him see anything on her computer screen. It would expose the business even more than the were’s outburst had. If this guy left before Constance removed his memories… Heather didn’t want to consider the possible exorcisms and purges that would follow.

The people who worked here were her family—the only real one she had. To protect them, she’d become more than assertive with him, she’d get rude, maybe even mean. She struggled to frown.

He staggered back to the door. Propped against it, he pulled off his right boot. It clunked on the faux-brick floor. His left boot followed.

Air hissed through his teeth.

Heather pressed her hand to her chest. She’d expected to see his socks, maybe even his bare feet, not hooves. “You’re not mortal.”

“No kidding.” He puffed out another breath. “That’s why I’m here.” He gestured to the reception area stuffed with potted plants and feathery ferns. The greenery made the coral walls seem even warmer in comparison. Faux-gas fixtures provided a dated, romantic feel, like old New Orleans.

He arched one dark eyebrow and raked his gaze over her.

Perspiration rolled down her back and between her breasts.

Pleasure sparkled in his beautiful eyes. “I take it I’m in the right place for a makeover?”

Few beings had deeper voices than his. Awe blossomed within her. A pleasant feeling. Her nipples tightened. She liked that, too, when she shouldn’t have. Given the huge bulge behind his fly, she guessed what he was. “You’re a satyr, right?”

Share what you thought about Surrendering to the Beast PRINT and earn reward points.

Other books in the Taming the Beast seriesView Series Page

Buy Now: £3.99
Surrendering to the Beast