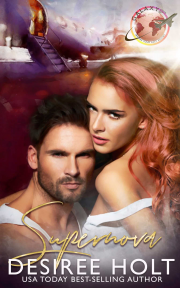 Book 3 in the Galaxy series

When Navy SEAL John "Rocket" Hardin rescued Mallory Kane , the intense hot sex they indulged in while waiting for extraction lefts its imprint. Even five years without seeing each other didn't diminish the memory. Now it's five years later, she's in danger again and he is leading Galaxy, the mysterious team, of former SEALs to rescue her once again. But can he get there in time?

Mallory Kane has never forgotten the handsome, rugged, very sexy SEAL who rescued her from the Taliban, or the steamy, unexpected sex that followed. When five years passed without any contact, she was sure he had forgotten her. But now she's in danger again. Will he be willing to mount another rescue? And does her still carry the memory of that very hot sex?

Share what you thought about Supernova and earn reward points.

Other books in the Galaxy seriesView Series Page