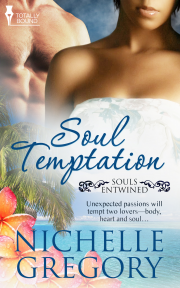 Book 2 in the Souls Entwined series

The beauty of Tahiti mesmerises Serene Ryan who has traveled to the island to be the maid of honour in her sister’s destination wedding. She soon finds herself distracted by the undeniable pull she’s determined to ignore towards Oliver Banner, the best man. When her good intentions are cast away in a moment of sizzling passion, Serene’s resolute on not letting things go further than one night.

Oliver Banner isn’t looking for anything more than a fun, sun-soaked time in Tahiti but the longer he interacts with Serene, the more convinced and determined he is to get past her cool persona to the fire he senses burns below the surface. He isn’t prepared for the connection he feels towards Serene or her refusal to explore things between them further.

Serene slipped her flip-flops on then opened the sliding glass door leading out to the terrace of her gorgeous overwater bungalow. She stepped outside into the balmy air and slowly exhaled. She still couldn’t believe her younger sister was getting married, and in Tahiti of all places. From her vantage point, she could see the sun preparing to set and she stared at the lush backdrop before her, almost too beautiful to be real. She’d wondered if her little sister would regret forgoing a big fancy ceremony for a destination wedding, but now she realised that Cameron and Misha had made an excellent decision. Tahiti was the epitome of romantic beauty, the absolute perfect place to get married.

Serene drew in a deep breath, inhaling the scent of plumeria, hibiscus, jasmine and other exotic flowers as she watched the waves shimmering in vivid colours of pink and orange thanks to the setting sun, breaking upon the shore. It was her first night on the island and she intended to savour every moment. The lulling sound of the water lapping beneath her calmed her senses. Everything seemed to vibrate at a slower beat and Serene knew she wouldn’t want to leave when it was time to go home.

Muted laughter drew her attention from the ocean to the bungalow beside hers. Curious, Serene moved along her terrace and stopped short when she saw Cameron’s brother, Oliver, with a stunning redhead in his arms. Serene huffed quietly as she recognised Shannon Erby, the television presenter from Celeb Chef.

She watched them kiss then bit back a gasp when Oliver roughly pushed down the front of Shannon’s sundress. Serene pressed up against the side of her bungalow to avoid being seen as the two moved from the shadows and into the fading sunlight. Shannon’s surprised squeal turned to a muted groan when Oliver dipped his head and took one of her nipples into his mouth. The British television host arched her back against the wooden railing while she dragged her fingers through Oliver’s hair, obviously enjoying his ministrations. Serene’s breath quickened when he hiked up the bottom of Shannon’s skirt as though he was going to take her right there for the whole world to see.

Or at least me.

Her bungalow was the only one they’d be visible to. It was time to go back inside, but Serene couldn’t, didn’t want to leave, drawn to the erotic scene the two unknowingly presented to her. Serene gasped as Oliver ripped off Shannon’s panties. The redhead’s little cry carrying over to Serene in the wind was cut off when he claimed her lips again in a kiss. Serene realised her own panties were wet as Oliver fumbled with the front of his pants, apparently unzipping them and not fast enough, from the way Shannon pawed at the buttons of his shirt.

Oliver’s shirt fell to the ground, revealing tanned, hard muscles, and she watched him lift Shannon, who locked her legs around his waist in the perfect position to be taken. Oliver bucked his hips forward and Serene moaned when Shannon cried out.

Oliver’s wild passion and Shannon’s heady responses kept her rooted in place. Serene’s heart thumped against her chest as he slammed into her, surely creating a mark on the woman’s back with his ardent efforts to meld her slender body with the wood behind her. Serene pressed her inner thighs together, bothered that she was aroused by her uncharacteristically voyeuristic behaviour.

God, Oliver knew how to move his ass.

“Olie!” Shannon cried out, no doubt in full agreement. She clung to his shoulders, her auburn tresses brushing along the banister of the terrace as Oliver rocked her body with his thrusts and teased her breasts with his mouth.

How long am I going to watch this?

Until the end. She was rooted to her spot, mesmerised by how effortlessly Oliver moved Shannon, controlling both of their pleasure. A small breeze moved over the terrace, ruffling the flowers decorating it. She rubbed beads of sweat off her forehead with the back of her hand. Her elevated temperature had nothing to do with the lovely Tahitian weather. She couldn’t take her eyes off of Oliver as he increased his pace and Shannon groaned.

Serene dug her nails into the wood beneath her fingers when his entire body tensed, indicating that he’d climaxed. She drew in air and realised she’d been holding her breath as the two lovers leisurely kissed. Oliver said something and Shannon giggled as he lowered her feet to the ground. Serene wondered what he’d said when Shannon wagged her finger at Oliver then smoothed her sundress down and disappeared through the sliding glass doors leading back inside their bungalow.

Except it wasn’t. Not with the sun glinting in Oliver’s hair and gorgeous naked torso as he zipped up his pants. Serene observed him while he lifted his face to the sun with his eyes closed, the lazy smile on his face, evidence that he was pleased by recent events.

Finally, her limbs obeyed. She took a step and froze when the wooden plank beneath her feet creaked.

Surely, he couldn’t have heard?

Their bungalows were close, but not that close. Serene held her breath. Seconds ticked by and she slowly exhaled with relief, thankful for having not been seen. Then Oliver lowered his head in her direction, opened his eyes and looked straight at her.

Serene froze as he studied her. He didn’t appear to be embarrassed, but she was mortified enough for both of them.

Oliver grinned as he moved closer to the edge of his lanai. “Enjoying the view?”

Serene parted her lips to respond, but no words came to mind as heat suffused her cheeks.

Serene cleared her throat and nodded. “Tahiti is beautiful.”

“Isn’t it?” Oliver turned towards her, offering a tempting glance of his tight abdomen and biceps. “It’s a delight to one’s senses. My brother and your sister picked one of the prettiest spots on the planet to tie the knot.”

“Yes, they did.” Serene stepped from the shadows, feeling foolish. “Well, I’ll see you later.”

Oliver raised an eyebrow. “Yes, you will. Next time, maybe you’ll join us.”

I enjoyed this story and the sex scenes were panty-wetting hot.

Soul Temptation is a tale of the sexual awakening of a woman who has never experienced sexual fulfillment. I wanted Serene to let Oliver take her on this journey, and the interaction between t...

Share what you thought about Soul Temptation and earn reward points.