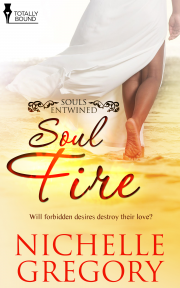 Book 3 in the Souls Entwined series

Married almost ten years, Aimee and Kaden are committed to facing any challenges within their relationship together…even if it means exploring unexpected forbidden desires.

Aimee’s life goes into a tailspin after her husband, Kaden, reveals he’s had an affair. Devastated, Aimee’s unsure whether to call it quits on their marriage or to forgive him. Meanwhile, she turns to Van, Kaden’s colleague and friend, for solace, but comfort turns to sizzling sex and mutual feelings she never expected. Committed to her marriage despite everything that’s happened, Aimee wonders if Kaden will be as forgiving as she has been for the sake of their relationship.

Kaden wants Aimee’s forgiveness. He’s willing to do anything to make things right, but wishes he could experience with his wife the same kind of spicy encounters he had with his lover. He’s shocked to learn the details of Aimee’s kinky tryst and jealous of the bond that exists between her and Van. Kaden doesn’t plan on losing his wife to another man, especially now when he and Aimee are finally being honest about what they need from each other.

Can their marriage survive and thrive with their new wicked passions?

“Well, Aimee”—Oliver Banner tapped his pen on his desk—“I’ve been hesitant about giving our current public relations coordinator the green light to transfer to our new location in Vegas, but after reviewing your social media marketing suggestions for Banner Hotels, I believe you are the right person to take over this position.”

Aimee smiled. “Thank you. I like to think out of the box when it comes to reaching new customers. The Banner Hotel name is already synonymous with elegance and comfort without much social media interaction. Jumping into this arena will guarantee getting more guests of a younger age demographic coming through your hotel doors.”

Aimee tried to mask her excitement as Oliver closed her portfolio. “And, I’m certain, once they’ve had the Banner hospitality experience, they’ll become repeat guests for life.” Oliver handed her work over. “I think you’re right and I can’t wait for you to implement these changes for us.”

“Well, I’m looking forward to becoming a part of the Banner team.” Aimee placed her portfolio inside her bag.

“You’re already part of the family.” Oliver gave her a warm grin. “How is Kaden, by the way?”

There it was. The one question she hadn’t been prepared to answer.

“He’s well.” Aimee struggled not to fidget as Oliver leveled his hazel gaze on her. Clearly, he was aware that Kaden had moved back home. She wondered how much more he knew, thanks to her sisters-in-law. “Busy as usual.”

“Well, I’m glad you two decided to work things out. You seemed torn in Tahiti, but I sensed you weren’t ready to end your marriage. I imagine it would be hard to walk away from a nine-year relationship.”

“Ten years in November.” Aimee stood as Oliver did, grateful that she was moments away from being done with her interview.

“Wow. Ten years. That’s amazing. You two should do something to celebrate the journey of your love.” He wagged his finger as he rounded his desk to stand in front of her.

Aimee forced a laugh. “Speaking of celebrations, how was Florence?”

“Ah… Italy was fantastic.” Oliver beamed. “I experienced it with new eyes with Serene by my side. We didn’t have time to fret over all the family members annoyed by us eloping there.”

“I’m sure.” Aimee walked with Oliver to his office door.

“You know Misha and Cameron would love to throw you and Kaden an anniversary bash.”

“Oh, I know.” Aimee gave him a bright smile as he placed his hand on the doorknob. “We’ll see.”

“Every relationship is a work in progress. You two will get there, especially since it’s something you both want. Enough of the personal stuff.” Oliver pulled open his door then held out his hand and Aimee shook it while managing a chuckle. “As far as business goes? I can’t wait to officially welcome you to our team. I know you’ll be a wonderful asset. I will be in touch with you by the end of next week with a hiring package for your review.”

“Thanks again for the opportunity, Oliver.” Aimee stepped out of his office and breathed a sigh of relief. She nodded at his personal assistant as she went by. The moment she went through the double glass doors, Aimee did a little shimmy in the empty hallway, excited to have the job.

Aimee pushed the button for the elevator and the doors opened moments later. She stepped onto the elevator and acknowledged the woman already inside before facing forward and confirming they were heading down to the lobby of the hotel. Aimee felt lighter with every floor they descended. This was the exact change she needed to get her life back on track.

The elevator doors opened and Aimee stepped into the lobby, admiring the elegant décor. She was thrilled to be working for such a prestigious hotel. Her cell vibrated in her bag and her heart flopped once she recognized the ringtone.

She took the device out with a sigh then answered, “Hello, Van.” Aimee tried to ignore the exhilaration and trepidation she always experienced upon hearing his familiar voice in her ear.

“I did. Oliver Banner thinks I’ll be a valuable asset to the team.”

“And he’s right. You’re damned good at what you do.”

His compliment brought a slight grin to her lips. “Thanks.”

“You’re welcome.” A beat of silence ensued before Van cursed. “Aimee, don’t do this.”

“Van…” Aimee passed a happy couple kissing next to a huge potted plant. “This is the best thing for both of us.”

“Don’t speak for me, kitten. I can’t believe you’re really going through with this after everything he’s done to you.”

Aimee paused by a gleaming piano in the center of the lobby and briefly closed her eyes. “He made a mistake.” She paused, thinking of how many times Kaden had apologized. “And so did I.”

“So that’s what you’re calling us this week? A mistake? Fuck, Aimee. Just a few weeks ago I told you I love you. Do you remember what you told me?”

“I should’ve never said those words to you.” Aimee blinked back tears as she cleared her throat.

“V-Van, don’t do this.” Feelings of sadness, guilt and regret warred within her, affecting her more deeply in the face of his anger.

“Do what? Love you? Aimee, I can’t change how I feel about you.”

“And I can’t change my situation. I love Kaden.”

Aimee squeezed her phone, torn by the angst in Van’s voice. “I told you this was how it would be.”

Pain lanced through Aimee as her throat constricted. “I can’t. You know I can’t.”

“Damn it. You’re killing me with this shit.” Van blew out a breath. “Do you think the feelings you have for me will just vanish into thin air?”

Aimee exhaled, wishing it could be that easy. “Have you seen Kaden today?” she asked, ignoring Van’s question.

Aimee pulled her phone away from her ear when it beeped to indicate an incoming call and groaned when she saw it was her husband ringing her. “Van, it’s him. I’ve gotta go.”

“Come over tonight. Kaden has a basketball game.”

“Aimee, I need to see you. I’ll make you purr. You know I will.” His voice dropped lower, scattering goosebumps over her skin.

She couldn’t deny that he knew exactly how to get her to purr for him. Their sizzling hot sexual chemistry was part of the reason it was so hard to make a clean break for the sake of her marriage. “I can’t come over. We both know what might happen.”

Van chuckled. “Might? We both know what will happen.”

“Right.” Flustered, Aimee started walking toward the exit. “Like I said, I can’t. We’ll talk later.”

“That we will. Later, kitten.”

Share what you thought about Soul Fire PRINT and earn reward points.