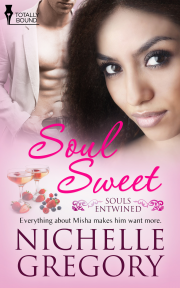 Book 1 in the Souls Entwined series

Savour the flavours, spicy and sweet…a taste of what’s yet to come.

A passionate cook with the desire to spread her wings, Misha Ryan decides to compete on a popular television cooking competition for the ultimate title of Celeb Chef. The culinary stakes are high, but Misha feels more than capable of handling any challenge thrown her way, until she looks into the eyes of Celeb Chef Judge, Cameron Banner.

After dealing with an emotional divorce, Cameron isn’t looking for any serious entanglements, but everything about Misha makes him want more. She’s adamant about limiting any diversions that take her focus off the show, but the unexpected mutual attraction between them distracts them both as they add spice and turn up the heat in an attempt to satisfy their insatiable appetites for one another.

Misha is devastated when evidence of their involvement has a disastrous effect on the final decision for the winner of Celeb Chef. When Cameron’s motives come under suspicion, she confronts him, putting a strain on their budding relationship. Celeb Chef is over and Misha realizes winning isn’t everything, especially if she’s lost the love of a lifetime.

“Misha, I’m ready to go. Are you almost finished with your menu suggestions for the Calhoun party on Saturday?”

“I’ll have it in your hand in a few minutes.” Misha barely glanced up from her laptop to look at Darius. “Almost done here.” She kept typing then paused to meet his gaze when he didn’t move from the doorway. “I’m serious. Give me five minutes and you’ll have it. If you want, I could just email it to you. I can lock up.”

Darius glanced at his watch. “That’s all right. I still need to order the prawns tonight to ensure delivery by Friday. I’ll be in my office.”

Misha focused her attention back on her computer and sighed. She refused to let him frazzle her concentration. He was under pressure—she could see it in his eyes. Usually, he handled stress well—an ability that made him an excellent chef, along with his gift for marinades and savoury dishes. After two years of working with him and briefly dating, she could pick up on all of his moods.

Misha hit the print button and slid off the bar stool. She stretched her arms over her head, enjoying the usual aches in her muscles that came along with her job. Misha flipped off the light illuminating the bar. She walked towards the back of the restaurant and into the office where Darius stood by the copier, with her menu suggestions already in his hand.

“I forgot to tell you”—Darius stared at the paper in his grasp and frowned—“Jerry Calhoun doesn’t care for spicy foods.”

Misha studied Darius while he continued reading her menu. His white chef coat was a striking contrast against his mahogany skin. She’d always admired how he managed to keep his uniform impeccably clean. He’d unfastened the first button of his uniform, a clear and familiar indication to Misha that he was ready to end the day.

“The red pepper flakes on the salmon will hardly be spicy. Just a little heat to kick up the flavour of the lime.” Misha smiled. “Besides, I’ve paired the seafood with my famous Parmesan, garlic-crusted, non-spicy chicken breasts.”

“Didn’t you prepare that dish for me?” Darius looked up at her with a wry grin.

“I did.” Misha brushed an imaginary piece of lint off her sleeve, uncomfortable with the memories his question brought up of the two of them spending the weekend together preparing some of their favourite dishes for one another. “You said it was the best chicken you’d ever had.”

“It’s a damn good entrée. I think it will make a nice addition to the menu.”

Misha nodded, pleased by his words. “What about the rest of my suggestions?”

“They’re all good. I like the idea of Key lime pie as one of the dessert options. We can get the limes from Carter Farmer’s Market, which happens to be owned by Jerry Calhoun’s sister.”

“I know. That’s why I suggested the dessert.”

Darius lifted an eyebrow. “Oh, I see I’m not the only one doing my research.”

“I always do my research, Darius.” Misha tapped her fingernails on the door. “You know that about me.”

“I do know that about you.” Darius placed her menu on his desk then crossed his arms. “This catering gig could potentially take Savoury to the next level.”

Misha cleared her throat. “It will take Savoury to the next level.”

Snagging the Calhoun account was a big deal for Darius and, as his friend, she wanted everything to go smoothly. The family usually used the same catering service every year for their company anniversary, and their decision to use a local restaurant had made the news.

“Thank you for always being so supportive.” Darius leaned against his desk. “I appreciate it.”

“I would.” Darius pushed off the edge of his desk. “Why don’t you let me take you out for a drink to celebrate getting the account?”

Misha’s eyes widened. He hadn’t asked her out since they’d both mutually agreed to keep their relationship strictly professional almost a year ago. She’d quickly learned from working with him that Darius was too much of a flirt to stay with any woman for long.

“As lovely as that sounds”—Misha glanced at her watch as if the current time was reason for her hesitation—“I think I just want to go home and relax.”

Darius dropped his hands to his side, disappointment evident on his handsome face. “C’mon, Misha. I’m not trying to get you back in my bed. Although…”

This was the conversation she’d thought they’d never have again.

“I thought we agreed to keep things strictly business between us going forward.”

“We did.” He flashed her his infamous, winner-take-all grin. “But lately I’ve been thinking maybe that wasn’t the best decision for us.”

“Beth. Nothing serious there. The woman bored me anywhere outside the bedroom.”

Misha rolled her eyes. “She seemed head over heels in love with you.”

Darius shrugged. “Of course, but she’s not the one I want.”

“You have a huge ego, you know that?”

“I’ve been told once or twice. It’s part of my charm. It worked for you, remember?”

“Okay, where is this coming from? That thing between us was over and done with almost a year ago. We make better friends than lovers, Darius.”

“Do we?” He took a step closer to her. “Because I think we do well in both areas. Misha, when I think about the future… I want you in it, and not just as my right hand in the kitchen.”

Reviewed by Beyond Black and White

An engaging story from start to finish. What especially impressed me was Ms. Gregory’s deliberate exploration of interracial relationships on a professional level, where neither the hero, nor the...

Share what you thought about Soul Sweet and earn reward points.

I’ve been asked why I write multicultural romance more than once and for a longest time I struggled when giving my answer. I was concerned as a black author, that my interracial stories somehow showed a lack of support of the black family, of the black man. I celebrate and cherish both, but I worried about my books with mixed heroes and heroines being looked upon by members of my own race as ‘sell-out’ stories.