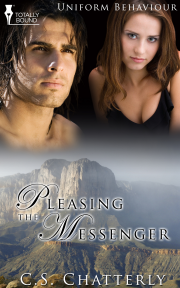 Book 3 in the Uniform Behaviour series

A singing messenger heats up Valentine's Day for a lonely park ranger.

Aeryn Saunders is working her way through college as a singing messenger for the Hearts of Extinction message delivery service. She gets the sad job of warbling a Valentine's Day kiss-off notice to a lonely park ranger.

Race Donnigan is prepared when his one-time socialite girlfriend dumps him. Then he finds that there's compensation in the form of a sweet singing messenger.

Aeryn Saunders looked over the map once more. Her destination was almost dead centre within Oak Tree National Park. She put her truck in drive once more and was rewarded with the sight of the cabin, just ten minutes later. Though it was late in the afternoon, her impression of the place was quite a bit different from what the client had described as the ‘dank little cabin out in the middle of butt-fuck nowhere’. The station was actually a very pretty place. It wasn’t huge, but the yard was landscaped to perfection and there was a split-rail fence around the yard. The grass was still brown from winter’s cold winds, but she could imagine that the entire property would look beautiful in the spring and summer months. It was surrounded by pine trees and old oaks that gave the cabin a homey look which appealed to her. Though the surroundings suited her, the environment and peace and quiet wasn’t everyone’s cup of tea or she wouldn’t be out here about to do this job. Her client had hated it.

As described, a white truck bearing a National Park Service logo was visible. It was parked on a cement drive, just to the side of the house. The client had even written down the license plate to make sure her little message got to the exact right person, at this exact time of day. Having met the woman for whom the missive was being delivered, Aeryn kind of felt sorry for the recipient. He was supposed to be a ‘big loser’ with ‘more brawn than brains’ and an ‘asshole who couldn’t spell underachieve’ let alone ‘attempt to make something of his life’.

An unfortunate part of her job was listening to clients explain the need for her services. She usually nodded in commiseration and even silently agreed with them on occasion. But since she was so far from town, she prayed this guy wouldn’t go off on her after hearing her do her thing. The client had specified that he wasn’t the violent type, far from it. Indeed, Aeryn had been assured the man was quite docile, even submissive. That seemed to be another reason for her having been hired. The Park Ranger she was supposed to confront wasn’t Alpha enough for the very wealthy Margot Treadwell-Stintington. Sometimes, Aeryn wondered how some of the people she dealt with ever got coupled-up in the first place. But their mistakes provided her with a means to get through college. She’d been delivering these kiss-off messages for almost four years now, and only had one more semester before being rewarded with a degree in Horticulture. She wasn’t always proud of what she did, but the money couldn’t be bested with a minimum wage job. Besides, most of the people who heard her messages weren’t surprised by what she had to say, just the delivery mechanism. No one had ever held what she did against her, and some even apologised for it. She hoped this time would be one of those occasions.

Pulling her truck right up to the front fence, she parked and again noted the darkening sky. It was an hour back into town, so she had to get this over with quickly. Her notepad was lying in the passenger seat, next to her purse and cell phone. One last time, she quickly went over the little poem she’d written. It was bad enough for some folks to hear rejection couched in such a way. It was worse if she made a mistake in the commission of her job and didn’t get the name or message right.

Having just banked his fireplace for the coming evening, Race Donnigan heard the truck pull up outside his cabin. He walked to the window, parted the curtains and saw a young woman exit the driver’s side. Sure that she was either lost or somebody in the park needed help, he quickly pulled his hiking boots back on, laced them up and swiftly walked to the door. Nobody ever came to his place at this time of day unless something was wrong. He had his door open just as the girl walked up. For a brief moment, he lost the ability to speak. The woman standing in front of him was the most beautiful creature he’d ever laid eyes on. She was tall, slender and appealed to his male senses even in her bulky wool coat. Her medium brown hair was long and fell just over her breasts. The woman’s eyes were the clear blue colour of wild trillium that grew in the woods and her face was perfect. Below a turned-up nose covered with freckles was a pair of luscious red lips. High cheekbones were delicately contoured and lay beneath skin that was clear and healthy. She could have been a model on the cover of any magazine, and he unconsciously ran a hand through his hair to smooth it. Whoever she was, it seemed her surprise at seeing him was as obvious as his was when he’d opened the door.

Share what you thought about Pleasing the Messenger and earn reward points.