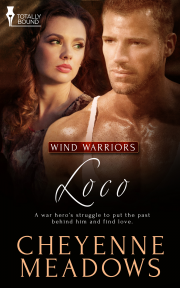 Book 2 in the Wind Warriors series

Loco knows he’ll give his life in the line of duty as a Wind Warrior sooner rather than later, but once he meets his new neighbour, Oakley, he has something to live for. Love.

Loco lives in the fast lane. A traumatic event in his past haunts him, spurring him on to perform increasingly more dangerous and heroic feats, impressing others but doing nothing to satisfy the guilt eating at his gut. Understanding that he will die in the line of duty one day, Loco accepts the fact as his due.

Oakley is Loco’s other half, sharing his condominium. Carrying her own deeply buried scars, she recognises the man for what he is—intensely brave, devoted, and struggling with inner demons. As they grow closer, she finds her frozen heart thawing and vows to love the tough hero and stand by his side through thick and thin.

Can he allow Oakley into his heart and his life, knowing that he will leave her a widow sooner rather than later?  Or can they learn to trust one another and finally realise that just maybe they are meant to be together?

Tanner dropped the heavy duffel bag on the living room floor and absently scanned through the pile of mail he had picked up off the hardwood moments before. His job pulled him away for days or weeks at a time, allowing the mail to pile up. He would receive multiple late notices on bills if he didn’t have everything arranged to be automatically paid through his checking account.

Finding nothing pressing or of interest, he tossed the handful of papers onto the dining table and headed into the kitchen. The fridge wouldn’t contain much edible food owing to his absence, but if his luck held, there might be something to drink. Good thing he’d stopped by a fast food restaurant on the way home or he would have a grumbling belly with no food in sight. A can of soda caught his eye. He quickly pulled the tab, took a deep swallow then stared at the nest of luxury living space laid out before him. From the high-end designer leather couch to the king-sized cushy bed tucked away in the sole bedroom, everything fulfilled his need for ease and comfort. He spent little money on anything else, having no real responsibilities but to care for his whims and wishes.

A few days per month found him at home, a half condo located in the suburbs of Center City. His position working for a private, highly secretive agency kept him on the move with little downtime in between. Not that his boss pushed them relentlessly, not at all. The unending work correlated more to the world going to hell in a hand-basket on a daily basis rather than a single person’s obsession for slave driving. A ring of the phone at any time of the day or night would send him scurrying from location to location, laboring to take out one nest of vipers after another. He lived for the adrenaline rush and putting his abilities to good use—his profession simply matched and reflected those interests. After all, he was a Wind Warrior, a member of a group of highly trained former military men who left regular duty, for one reason or another, and sought a meaningful role where they could use their exceptional skills for the greater good, wiping the worst of the worst off the face of the earth. He didn’t need fame or public praise to do his job. Quite the opposite. He preferred to go in, complete his mission, come home in one piece then celebrate with some hard-earned rest and relaxation.

The ringing of the doorbell caught his attention. Instantly on alert, he stalked quietly to the front door, peeking out of the tiny hole before releasing his pent-up breath. In his business, being overly cautious could just save a life.

A young woman with long brunette hair stood outside his door with a full basket clutched in her hands.

After clicking the locks, Tanner pulled the door open and peered down at her. “Can I help you?”

She glanced up, a bright smile covering her face and extending to her sparkling green eyes. “Hi. I’m Oakley. I’m your other half.”

He stared dumbfounded at her for a couple of beats before his tired brain made the connection. “You live next door?”

She quickly nodded, her long hair swaying with the movement. “I moved in a couple of weeks ago and have been waiting to meet you. This is for you.”

She extended the basket toward him, exposing her toned, muscular arms. He automatically took the gift, allowing his gaze to flow over her body from head to toe. Not only were her arms ripped for a woman, but her whole body shouted athlete. She stood a head shorter than him, compact, but with power, if her conditioning told the truth. Loose black shorts matched a dark-colored T-shirt advertising a local 5k run from a year ago. One glance at her legs made his gut clench. They weren’t long and lean like a runway model’s, but powerful and sculpted like those of a woman familiar with running shoes.

“It’s pound cake. I made the strawberry glaze myself. A lot less sugar than icing, but just as tasty with some extra vitamin C from the berries.” She gestured toward the lump in the bottom of the basket. “You might want to keep it in the fridge, though.”

He locked onto those sparkling green eyes. “I thought welcome to the neighborhood gifts were given by the old inhabitants to the new ones?”

She shrugged. “You haven’t been around. Besides, I like to bake.”

“Nope. My luck you’d get food poisoning and kick the bucket. Then some frat boys with an obsession for rap and acid rock music at all hours would move into your place. No thanks. I’ll keep tall, dark, and quiet, just the same.”

The corners of his mouth twitched. “I see.” He shifted the package to one arm, holding out his hand. “I’m Tanner.”

She shook with a tight grip, something he liked in a woman. The limp fish handshake most of them did turned him off. He much preferred strong, independent ladies.

“It’s nice to finally meet you. Just get back from vacation?” Her attention focused behind him.

“Work.” He watched and waited for her response, hoping she wasn’t one of those nosy women that couldn’t seem to let sleeping dogs lie.

“You run?” He pointed to her shirt.

She glanced down, as if just recalling what she actually wore. “Yeah, I run 5ks. I’m not the fastest runner and never win, but I like doing it. Besides, the entry fee money goes to a charitable cause.”

From the looks of that body, she ran a lot. But her upper body strength said running wasn’t her only form of exercise. Probably one of those health food fanatics, too.

Nothing wrong with being active. In his profession, he had no choice but to stay fit and in top condition. Slow men caught bullets. Weak men couldn’t stand up to the terrain. Wimpy men simply wouldn’t do the job or pass basic training in the first place.

Oakley shifted her weight from one foot to the other. “Well, I’d better get going. Hercules will be upset if I’m late.”

“Hercules?” He arched an eyebrow at the name.

A genuine smile covered her face, showing her pride in the animal. “My dog.”

“Oh.” Just what he needed—a small, yappy fuzzball next door to wake him with constant barking. Not that he disliked dogs—actually much the opposite. However, his present career left no time for a pet, especially one as needy as a canine. In the meantime, he didn’t want his downtime disturbed by someone else’s pampered ragamuffin.

“Gotta get going. Welcome home.” She trotted back to her side of the condo with a quick smile and wave.

He watched her go, noticing the sway of hips with each step, the nice shape to her lithe, firm body, the tight ass. A Playboy model she might not be with her small, modest breasts, but he certainly appreciated everything he saw in her package—energetic, toned, with just enough meat to fill a man’s hands and mouth.

Growing up in the Midwest, I began reading romance novels in high school, immediately falling in love with the genre, to the point where I decided to write professionally for a career. However, that dream splattered against a brick wall, resulting in a quick death in my first writing class in college when my professor told me bluntly that I wasn't any good at it. I shifted gears quickly, and left my writing dreams behind, eventually settling on becoming a nurse.

A few years back, I stumbled across a fan-fiction writing site on a favorite author's webpage. I began to read stories others wrote, not only making some wonderful close friends from the experience, but also, really learning to write for the very first time. Here I was able to share short stories, practice my writing skills, and truly develop into a writer. More than that, the experience allowed me to revitalize my dream, as I rediscovered joy in writing. Now, I spend my days off with my alpha male characters, quick witted heroines, and see how much trouble everyone can get into.

When I'm not working or writing, I enjoy working in the garden, canning, and seeing my backyard as a living canvas for my whimsical landscaping, and, of course, reading romance novels.

I also liked how the relationship drama wasn’t a massive part of the book.  Instead it focuses more on the characters personal issues.  This worked really well where Tanner was conc...

Looking for a nice sweet story? Look no further than Loco. Everything comes together at the end with a nice HEA that put a smile on my face. I will say...

Share what you thought about Loco and earn reward points.

Other books in the Wind Warriors seriesView Series Page