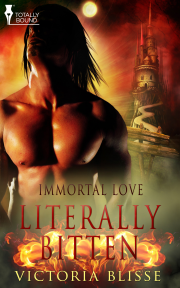 Books brought them together, blood lust binds them, but can her puritanical father pull them apart?

Lily loves fiction and has done since she was a child. It was her escape from the harsh reality of life being brought up by just her over-protective dad. Tom only ever reads textbooks, claiming that there's enough to fascinate in this world and that he has no need to read about pretend places. But when he walks into Lily's book shop he finds out they have a lot more in common than he first thought.

When the young couple take a trip to the famous vampire and human bar, The Point, Lily gets a shock. Her estranged father is there as part of a Purity protest; he is violently opposed to her, Tom and anything that the cult calls unclean. Which is just about anything fun.

Can Lily and Tom overcome these prejudices and their own inexperience to find love that will last forever?

Lily didn’t believe in forever love—she wasn’t sure she believed in love at all but it was only a few days until the rest of the world celebrated Valentine’s Day so she had to make up her front window appropriately. She hated to be motivated by consumerism but she ran a bookshop and at the end of the day she had to sell books. So when she had finished strewing red roses and hearts in her main window and had filled it with classic romance books she decided it was time for a treat.

She settled herself down in her chair by the till and opened her book. She was revisiting a favourite from her past, a fantasy romp where the hero had a split personality, or he was a demon, whichever way you preferred to look at it. It was a volume she looked to when she needed comfort and an easy read. Some passages she knew off by heart but she always ended up being pulled deeply into the action within its pages. She’d always loved books, which was a shame as her father hated most of them, the interesting ones anyway. They hadn’t had fiction books in the house when she had been little. Her mother had died when Lily had been a tiny tot, so for as long as she remembered it had been just her and Dad.

When Lily had started school she’d discovered the library. She hadn’t been allowed to take books home but while she was in the school building she’d spent as much time there as she could. From her first day in reception to her last day in university, she would spend a chunk of every day in the library reading the fairy tale books she hadn’t been permitted to enjoy at home. She could never share the stories she loved with her father and she hated that. But he held very strict beliefs that seemed to get stricter with every passing year.

It had got to be all too much when he’d decided to join Purity. If you thought of the craziest cult you’d ever heard of you’d have an idea of what Purity was all about. A group of people from all walks of life who strove for moral perfection in everything. Lily had moved out just as Dad had taken to the group. She hadn’t been able to cope with how her father had changed. He had always yelled at her, telling her what she shouldn’t do. He had never given her any praise or affection. He believed it wasn’t pure. She had left five years ago and as much as she found it sad to have nothing to do with her only flesh and blood in the world she had soon adapted to living alone.

She had started out just working in the shop, aptly named Book Love, and it was her perfect job. She was surrounded by the must and the rustle of pages all day every day. When the old owner had died, she’d left the store—and its debts—to Lily. But Lily had turned it around. With a business loan she had brightened up the place, installed a coffee machine and sold snacks. She’d set up chairs and tables and large cushions around the place so people felt they could stop and read and browse. She’d found that the more comfortable people were, the more books they bought. Rarely did anyone walk in and walk out without buying something, even if only a cup of coffee or a chocolate muffin.

It was a quiet day in the shop—the Monday lull after the weekend rush before the midweek madness. Lily had toyed with closing all day but she was a solitary soul and she had all she needed to be happy at the shop, so she would enjoy her book in the peace of her sanctuary. She’d never been one to socialise, and not just because of her father’s strict rules about her home time, either. She was not a gregarious type, wasn’t interested in make-up and pretty clothes. She wore what she felt comfortable in. Soft trousers or long, heavy skirts matched with simple T-shirts was her favoured style. She would try to complement her Rubenesque figure with a V-neck to her tops and avoided stripes like the plague. She always felt she was a mishmash of styles, since she’d been blessed with abundant curves, but her skin was as pale as rice paper and would not tan, no matter how hard she tried.

Lily was fairly convinced she’d been born in the wrong century. A couple of hundred years ago she’d have been the height of fashion with her impressive décolletage and pale skin that appeared to never have seen the light of the summer sun and so would have proved she was wealthy and well-to-do. She was sure her figure would benefit from a corset, too. But she had never been brave enough to visit a lingerie store to be fitted for one. She was so far away from being comfortable with the fripperies of femininity that the idea of walking into such a place filled her with fear. Lily was the kind of woman who bought everything in the local supermarket. Her snacks, her household goods and even her underwear. She liked it that way. It was efficient and tidy, like her.

Her perfect, lazy afternoon peace was shattered by the familiar jangle of the door being opened. She put down her book and smiled.

I will simply say that the book has a credible and involving plot that touches on timeless and universal issues. The hero and heroine are engaging and you really want them to achieve a happy ever...

A quintessentially English Vampire story - who else would brew up when the going gets tough! Lily has not had the best life - her controlling father forcing her to decide to leave home at at a y...

Share what you thought about Literally Bitten and earn reward points.