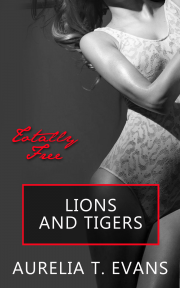 Once the curtains close and the lights dim, the lion and tiger of Arcanium turn back into Jason and Lily, two young college kids who happened to get high in the wrong place at the wrong time.

Trapped in a demonic circus, they do their time as best as they can, with only each other as company.

Publisher's Note: This short story involves characters from the Arcanium series, and is best read after book one, Fortune. This takes place after chapter six but can be read independently.

Share what you thought about Lions and Tigers and earn reward points.