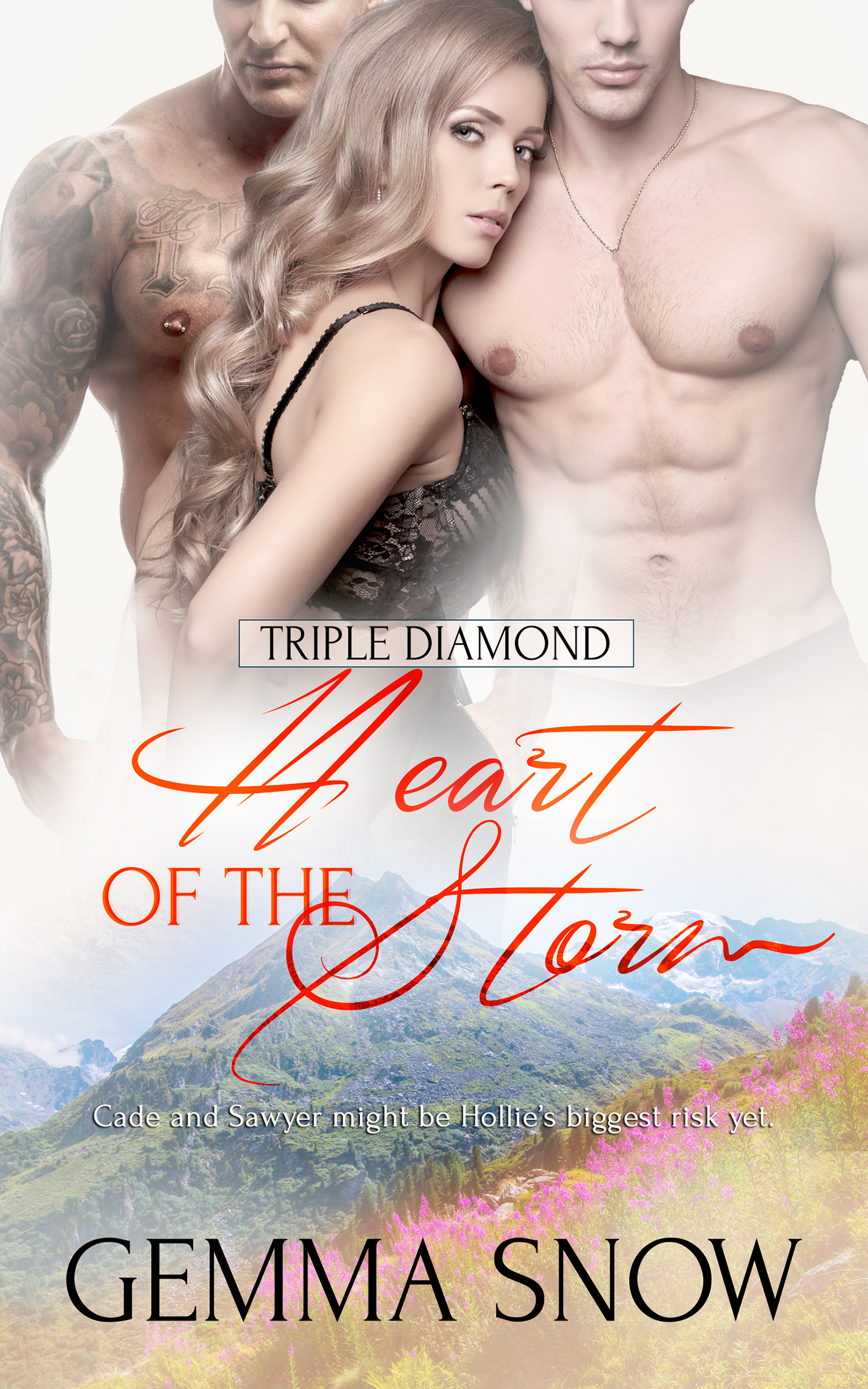 Heart of the Storm

Book 4 in the Triple Diamond series

Cade and Sawyer might be Hollie's biggest risk yet…

Ten years ago, Hollie Callihan left her best friends Cade Easton and Sawyer Matthews in the middle of the night for fear of breaking their hearts—and broke her own instead. She’s spent her whole life chasing adventures on distant shores, but spring floods in the Black Reef Mountains force Hollie, Region VIII FEMA Response Director, to return to Wolf Creek, the town where she left her heart in two.

Cade and Sawyer are now Wolf Creek’s chief of police and fire captain, Hollie’s first line of defense in emergency response…making them unavoidable. Her former friends are all grown up now and totally at odds since she left.

Hollie knows she should stay as far away from temptation as possible. After all, Wolf Creek is a temporary stop and there’s no place for the daydreams or nightly fantasies she has about Cade and Sawyer—the same ones she’s been having for the last ten long years.

But facing genuine destruction and danger alongside Cade and Sawyer helps Hollie learn that vulnerability and trust aren’t dirty words. If she’s brave enough to let Cade and Sawyer in on what had her running all those years ago, Hollie might just find that taking the biggest risk of her life leads to its biggest adventure—three hearts beating as one.

Hollie’s voice was resolute and she did her best to keep the panic from rising further up her chest and into her throat, where it would inevitably clog her speech and undermine the powerful, capable persona she had been carefully crafting for nearly a decade.

“Casey isn’t the Response Director for Region VIII, Callihan. You are.” Debra Lewitt was a damn good boss to have for people who traded in emergencies, but Hollie really wished that the woman’s icy exterior would melt just a little right now.

Which was a rather poor analogy, considering that Hollie wouldn’t be in this situation if the Black Reef Mountain Range wasn’t about to drop a historic amount of snow runoff into Lewis and Clark County.

“We need you in Montana by Sunday night at the latest.” Lewitt dropped the folder onto Hollie’s desk and folded her arms, giving Hollie the expression that she had clearly given hundreds of subordinates and superiors over the years. Hollie got it. Of course she did. Working in any government agency as a woman was challenging enough—she could only imagine how much more difficult it would be to find respect as a woman of color. But she wasn’t being an asshole for asshole’s sake, she just…

She was just terrified to go back.

The moon would have been better. Hell, Los Angeles or New York would have been a fine substitute, because they were farther away, and farther away was preferable because Hollie’s cozy office in downtown Denver suddenly felt far, far too close to the mountains of Wolf Creek, Montana. And everything else she would find there.

“Callihan.” Lewitt bent down over her desk. “Where’s your head?” This was said with a modicum of emotion, which meant things had to be pretty bad. Hollie never had been very good at hiding what she felt.

“There’s a lot of history for me in Wolf Creek, ma’am,” Hollie managed. “I haven’t been back to that town for nearly a decade.”

Lewitt’s features softened almost imperceptibly, but Hollie had been working at Debra Lewitt’s side for nearly five years, and she had become an expert at reading the micro-emotions.

“Maybe it’s the right time for you to take this trip,” she said, giving Hollie a far too discerning gaze.

Or maybe even the idea of those old haunts makes you feel vulnerable.

“I’m not so sure everyone there will agree.” Hollie half-whispered, unsure whether she was speaking to her superior or to herself. It also wasn’t necessarily true. She had no idea what the reception would be upon her arrival. Hell, they could have forgotten all about that night. All about her.

The idea that such a defining moment in her life could be so easily replaced with a white picket fence or two-point-three children didn’t sit well with Hollie, but she had made her choices and she would make the same ones given the chance. She hadn’t regretted her decision to leave in years.

“Then don’t go to make friends,” Lewitt replied. “We deal in emergencies every day, Callihan.”

She took a deep breath and released it very slowly. “Hollie, look at me.”

Hollie looked. They’d been in their fair share of shit-show situations together, on the ground and in the ‘war room’, as they affectionately called working in disaster and emergency relief for one of the snowiest, wettest, driest and most-tornado-y regions in the country. That sort of life-or-death environment could really bring people together, and it had, in its own way. Still, Lewitt was hardly prone to intimate address. So Hollie looked.

Damn Debra Lewitt for being as perceptive at reading people as she was at anticipating emergency fallouts.

Because even if Hollie could have denied it, even if she could have looked her discerning boss right in the eye and told her that Wolf Creek, Montana, was just a place and nothing more, she didn’t get the chance. Lewitt tapped on the folder with one nail, raised her eyebrow and said, “Call me when you arrive on Sunday.” Without another word, she turned on her heel and strode out of Hollie’s office.

Be like Debra Lewitt and you might survive this. Might. Because as much as returning to a town she hadn’t called home in nearly a decade wasn’t the emergency she was used to, wasn’t the fires and the floods and the tornados, it was an emergency. And when she thought about returning, about facing down the memories and emotions she had been running from faster than a cyclone on the open plains, Hollie couldn’t help but wonder which was more dangerous.

Gemma Snow loves high heat, high adventures and high expectations for her heroes! Her stories are set in the past and present, from the glittering streets of Paris to cowboy-rich Triple Diamond Ranch in Wolf Creek, Montana.

In her free time, she loves to travel, and spent several months living in a fourteenth-century castle in the Netherlands. When not exploring the world, she likes dreaming up stories, eating spicy food, driving fast cars and talking to strangers. She recently moved to Nashville with a cute redheaded cat and a cute redheaded boy.

The writing is EXCELLENT!!! I absolutely adored the tone of this book and the way it was written. Gemma did, in my opinion, an exceptional job of stringing the story together with a just-barely-there hint...

Avid Reader gave the ménage romance Heart of the Storm by Gemma Snow 4 stars, saying “These three have a chemistry that comes from their deep connection years ago. They are able to fall back into...

Share what you thought about Heart of the Storm and earn reward points.

Other books in the Triple Diamond seriesView Series Page