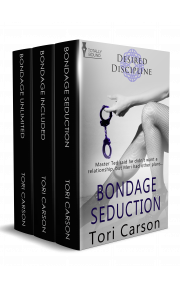 Master Ted tries to keep it purely sexual. He says he doesn’t want a relationship, but Meri has other plans…

Even in a room full of friends, Ted often feels alone. As the black sheep of the family, he’s never measured up to the expectations of others so he’s stopped trying. Expecting to and okay with spending the rest of his life alone, he’s thrown himself into his business. He spends his days managing the sex toy division of DiscipliNation and his evenings in the kink club.

Although fireworks erupt at their very first meeting, Ted knows better than to give his heart to an overachiever like Meri. He valiantly tries to keep his distance, but her allure goes deeper than a purely sexual attraction. Meri ignites his passion and yet, in her company he experiences a peace he’s never enjoyed before.

Ted sets Meri’s panties on fire until he orders her to stop wearing them. Meri falls hard and fast for the tall, dark Dom. He tells her up front that a relationship isn’t part of his plans, but Meri has her own agenda.

André would do just about anything to please Adriana, but the one thing she needed, he couldn’t give.

Adriana has it bad for André, a consummate bachelor. He owns a kink club and often jokes he’ll die single with a flogger in one hand and a whip in the other.

Their instant spark turns into a smoldering fury when she learns he has three live-in trainees. She has no intentions of being one of many. She is a one man kind of girl and she demands the same in return.

André is equally intrigued by the black-haired beauty. Though he has three women, ready and willing to please his every whim, he can’t stop fantasising about Adriana. She invades his thoughts and dreams. He enjoys their crazy, non-sequitur conversations. He looks for ways to make her smile. Yet, despite his desire, André knows he can never be what Adriana needs.

When a situation arises and Adriana suddenly has André all to herself for nearly four months, she’ll stop at nothing to land her man. Though she lacks his experience, Adriana has more than one surprise up her sleeve. Will she be the woman to curb his bachelor ways?

After Eva gave Giovanni her love and virginity, he was gone. Now he’s back and the torch burns hotter than ever. But can love grow without trust?

Back in college, it wasn’t love at first sight. Though Eva Anderson was attracted to the sexy, confident Giovanni Parma, she didn’t trust anyone easily. Gio patiently worked past her every defense. He wooed his way into her heart and her pants. Then, the next morning, he was gone.

Gio knew early on he was a kinky SOB. It was just his luck to fall in love with a straight-laced, vanilla kind of girl. He tried hard to curb his baser instincts—she deserved a romantic, gentle man—but he just couldn’t do it. He knew if he stayed, he’d lead her down his own dark path.

When a chance meeting thrusts them together again, neither can deny the instant and intense magnetism sparking between them. A little older and wiser, Eva decides to explore her sexual fantasies with the ex love of her life. His untamed, no-holds-barred manner of sex wins Gio a place in her bed, but she refuses to let him anywhere near her heart.

Gio must prove he’s worthy of a second chance both in and out of the bedroom.

Meri looked in the mirror of the ladies locker room at DiscipliNation. Her dress had looked cute on the size two mannequin at the fet store. The black spandex mini-dress with strategically placed slashes had seemed like a good idea. It was daring but allowed all her truly private areas to remain private—and kept her from wearing a bra or panties. Damn it, if she pulled the dress down to keep it from showing the cheeks of her ass, the slits opened up like she’d been in a shredder accident.

Decision time. Turn around, go home and be satisfied to only read about other people fulfilling their fantasies, or she could pull off her big girl panties and give this a try. Hell, she’d already spent an enormous amount of money to join the club. What did she have to lose—except her modesty and boredom?

Taking a deep breath, then two. Okay, one more maybe… She bent over and removed her underwear. After stuffing it into her locker, she looked at the ceiling—anywhere but the mirror—and forced one foot in front of the other until she’d entered the great hall. The low, steady beat of music drew her farther into the room. She stayed as close to the walls and in the shadows as possible. Maybe if she could make it to the bar, she could melt into the scenery for a while and get her nerves under control. Why was it way over there?

She caught herself pulling down her skirt then remembered how bad that looked and let it ride back up. Turning toward the locker room, she considered running out of the place before anyone noticed her.

Meri froze, hearing the deep baritone voice behind her. Too late. She squeezed her eyes shut, wishing she could vanish. Meri tried to breathe. Short, shallow breaths were all she could manage. She plastered a smile on her face, opened her eyes, turned around and looked up. Way up. Holy fucking shit! What was he, six foot five? Meri was tall, five foot twelve was how she usually phrased it. What a pleasant change to find a man actually taller than she was.

She extended her hand. “Nice to meet you. I’m Meri.” She’d never met a more imposing, sexy man in her life. With his jet-black hair and striking blue eyes, he set her heart pounding. Normally, she wasn’t a fan of the goatee look, but on him, it worked. Thank God, she hadn’t run back into the locker room. Just meeting this man was worth the price of membership.

When he took her hand to his mouth and kissed her knuckles, she almost swooned. Do women still swoon these days? Probably not. Most likely that went out with the vapors. Damn it, Meri, focus.

“If this is your first time here, let me show you around and answer any questions you might have.” He slid her hand around his bicep.

Oh hell, yeah. “That’s very sweet of you. Thank you.” Wow, her hand couldn’t fit all the way around his arm.

“Have you filled out an interest inventory? If you let me see it, I could introduce you to likeminded people.”

“No.” Should she admit she was overwhelmed by it? She didn’t even know what half the things on there were. “This is my first time venturing into a club or exploring the lifestyle.” She met his gaze and basked in his warm smile. “I was a little confused by it all, actually.”

“I’ll be happy to talk you through it. Would you like to look around first?”

“I’d love to see more of the club.” Maybe she’d learn a bit and be able to speak more intelligently about the inventory.

They continued along the path Meri had been walking. The first piece of equipment they came across was a beautiful, dark wood table. It had a thin layer of padding along the middle with restraints at all four corners. There was a stack of sheets on a shelf underneath.

“Is this for wax play?” Meri whispered. No one was close by, but it seemed too naughty to talk about it out loud.

“Yes. Do you enjoy sensation play?” Ted was gazing down at her like a tiger hungry for a meal.

Meri raised her shoulders the slightest bit. “I have no idea. I’m afraid I haven’t experienced much outside the vanilla realm and probably toward the conservative side of that.” She gave a nervous chuckle.

The smile that slid across Ted’s face sent butterflies through her tummy. “Everyone in the lifestyle was a newbie at one point. How did you get attracted enough to seek out a club?”

“That’s smart. It’s a much safer environment to explore your kink in. Is there anything in particular that you’d like to see? During the week, it’s a bit quieter than on party nights. It’s a good way to get your feet wet without being overwhelmed.”