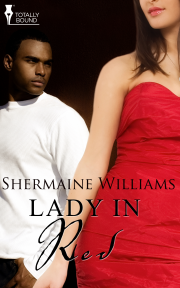 An attraction to her new boss was unwise — Florence knew that — but she just couldn't help it. Almost as if there were other forces at work drawing them together…

Besides being arrogant, there isn't much that Florence knows about her new boss. In fact, no one seems to know much about him. Taking the sensible course of action, she fully intends to leave the mysterious Mack to his own devices, but her body and mind have other ideas.

No matter how hard she tries, Florence's mind would always return to him, leading her to do what was necessary to entice him. Little does she know that Mack knows more than she could ever imagine.

The platform was already packed with people and, as time passed, it gradually became worse.

Florence looked up at the indicator board, which confirmed that she would be waiting a whole five minutes for the next train. It was supposed to be such a good day and yet she was already starting to feel anxious.

When she had received the letter to confirm she got the job, she was so happy that she treated herself to a brand new coat as well as other additions to her wardrobe. A new job deserved new attire. Besides, winter was fast approaching and it was starting to get cold outside, so it could be deemed a practical purchase.

At that moment, when she was below ground with scores of other people, she was beginning to feel hot and the idea of starting her first day flustered was making her feel even worse.

Trying to make herself as small as possible, she clamped her arms to her sides, tightly gripping her handbag as more people gathered on the platform.

She was becoming so tense that she had to make a conscious effort to unclench her jaw, staring at the image on the grimy poster attached to the opposite wall. Even had she wanted to see how many more minutes she had to suffer, she would have been hindered by the number of people who surrounded her and did a good job of blocking her view of the indicator board.

The eerie quiet was only broken by the odd cough, sneeze or snippet of hushed conversation before the low rumble of an approaching tube train could finally be heard. The accompanying rush of air ruffled her hair and caused several strands of her sleek brown bob to blow across her face. Exhaling with exasperation, she quickly tried to smooth it back into place as she was swept along by the crowds around her, everyone surging towards the points where they expected the doors to be when the train stopped.

Despite the number of people around her, she was one of the first few passengers to board the carriage but still didn’t get a seat and had to settle for shuffling along until she was standing next to another woman, standing as close as she could without invading her space in order to accommodate the many more people attempting to get on the carriage.

Staring into space, she waited for the doors to close, trying to calm the butterflies in her stomach, but a sudden loud voice dragged her away from her thoughts.

Certain that he couldn’t be addressing her, she glanced around to see whether there was any other woman wearing red, but there was no other woman who could fit the description. Turning to face the direction of the authoritative voice, she saw that it belonged to a man who had forced his way onto the carriage despite there clearly being no room.

“There is no room for me to move down,” she retorted, looking around to ascertain whether her enforced neighbour had moved.

She felt a strange sense of relief to find that her defensive stance was justified.

“I’m sure there’s a little more room in there.”

He craned his neck in an attempt to prove his assumption as the driver’s mind the doors announcement blared distortedly over the speakers while she glared at him, daring him to say anything more. Forcing his way in, he remained silent as he concentrated on ducking his head in time to stop the edge of the closing door colliding with it.

Though she knew she was in the right, she still felt some embarrassment at the fact that she had drawn attention to herself because of one man’s complete lack of courtesy. The idea of a good first day was dissipating with every second that passed. Feeling her face flush, she glanced over to find that the woman next to her gave her a sympathetic smile as the train lurched away.

Silently, she questioned her spontaneous decision to purchase such a conspicuous red coat. Though she had always liked the colour, she wasn’t usually bold enough to pull off wearing it in such a significant manner.

Before the train had even reached the first stop, a strong compulsion made her glance in the direction of her new combatant, but found he wasn’t looking in her direction, his eyes trained straight ahead.

Standing against a glass partition, his back was to her, oblivious to the daggers she was sending in his direction. Even from behind, he was a formidable looking man. From his height to his smooth brown skin, he had an image that demanded attention. In fact, had it not been for his rudeness, he was the type of man that she would normally be attracted to, but the fact that he clearly used his size to intimidate others put that thought out of her mind. It made her recall a dream which had been vivid enough to jolt her awake, hot and breathless. Her subconscious mind had conjured images of her having sex with a man just like him. At least, mostly like him. It had been a black man with the same build, but his face had been hazy, like watching a programme where people couldn’t be identified.

She remembered the strength of his body, feeling the movement of the muscles of his back as their bodies moved in unison.

The memory of it alone caused a warmth to spread across her neck, enough to make her loosen her collar as she took another quick glance in his direction, finding he remained facing away from where she stood.

Share what you thought about Lady in Red and earn reward points.