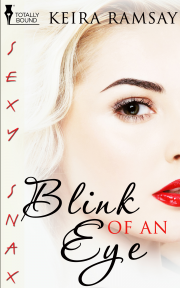 Blink of an Eye

She's ten years his senior. He's a veteran who feels a million years old. When they take a chance on love, everything changes in the Blink of an Eye.

Senior Airman Scott Carnes is sick and tired of being a hero. Recently returned from Afghanistan with a combat injury that resulted in a lost eye, Scott will do anything to stay in the Air Force, even take on a desk job he knows he'll despise.

Cassidy Thompson doesn't know what's hit her when the handsome young man with the haunted aura walks into her cafe. What she does know is that she's never been more drawn to a man…even if he is at least ten years her junior.

Publisher's Note: This book was previously released by another publisher. It has been revised and re-edited for release by Totally Bound Publishing.

Reader Advisory: This book contains an action scene involving a tornado in Oklahoma City. We are aware of recent events in the USA and want readers to know that our thoughts are with the people and families at this very sad time. The author has chosen to give her royalties to the recovery efforts, specifically the American Red Cross.

Cassidy Thompson swiped a damp rag over the spotless linoleum counter and stared out of the big picture windows into the ominously still Oklahoma night. The comforting, rich smell of coffee and pastry swirled in the air around her, but even that couldn’t settle her jangling nerves.

Something was going down… She could feel it, and so could her customers, if their lack of attendance was any indication. She was glad she’d let her one full-time employee, Erica, take some extra time off. There wasn’t enough business to justify her pay tonight.

Hell, it was late August and the weather just wasn’t right for this time of year.

On a normal Tuesday night, Cassidy’s Cuppa Café would have been hopping with regulars and tourists who’d wandered out of the Main Street district, even this close to her nine o’clock closing time. Not so tonight. The locals knew better than to stray far from home during conditions like this, and the visitors seemed to be sticking close to their hotel rooms.

The bell above the door chimed, pulling Cass’ attention away from the window to her brave-the-elements customer.

For a brief moment, she allowed herself to examine the young man standing in profile to her. With strong, regular features, he looked like any other twenty-something Oklahoma college student. Probably ROTC, she thought, noting the strawberry-blond hair cut high and tight and the well-toned build only slightly camouflaged by faded jeans and an Oklahoma State University T-shirt.

Ah, if only I were ten years younger…

She took a closer look… Yeah, he had an athletic, yummy body, but there was something about the way he carried himself—almost as if he were cradling an injury—that was in direct contrast to the air of invincibility he projected. It was strange, because she’d seen the same look in the mirror more times than she could count over the years.

Cassidy liked to think she could tell a lot about people before they even opened their mouths. In this case, she was pretty sure she’d hit the nail on the head… This boy had suffered, was probably still suffering, as a matter of fact, but wouldn’t let a damned soul know about it.

Then he turned and the breath clogged in her lungs. One sky-blue eye assessed her in a decidedly tactical manner. The other was concealed behind a black eye patch that contrasted starkly against his pale skin. While she knew he could have lost the eye as a child, in a farming incident or car accident, something made her think it had been recent, very recent…and most likely ugly.

"What can I get for you?" Cassidy tossed the rag over one shoulder, happy that her voice hadn’t wobbled. The last thing this kid needed was someone feeling sorry for him. Not that he looked as if he’d take it.

"Regular coffee, black…and maybe a piece of pie." His voice was deep and resonant, too resonant for a man in his early twenties. The impression of injury she’d sensed before was gone now, and in its place was certain, calm surety.

I'm a great believer in Fate. Yeah, with a capital ?F?. And I write in those terms. Why? Probably because my beloved husband said he fell in love with me the first time he saw me. You might ask if it was a two-way gig… In a word, uh-uh. Not that he wasn't fine to the extreme, but I wasn't looking for forever…more of a fun vacation experience. Yeah, so now we've muddled our way through over twenty years of marriage, and I have to admit to his superior intuition on that one!!

So, if you're looking for an Alpha hero who just happens to "know" his life-mate when he sees them, don't be overly surprised.

It was short, sweet, and deliciously steamy for lovers of hawt and heartwarming romance reads.

Share what you thought about Blink of an Eye and earn reward points.