Corinne A. Silver talks to us about why and how she started writing

Someone asked me why I wrote a book and what the process was like.

And that is, like, a really difficult question. It has taken me a long time to even begin to formulate an answer.

Why is the more concrete question and is, therefore, easier to answer. I’ve been a writer since my grade school librarian held a poetry contest about colors and I discovered the way words can create whole other worlds inside us. Words give writers superpowers to make readers feel and believe and experience things. Words allow us to share our internal hallucinations with others.

I wanted to share it because I knew I wasn’t the only one who was looking for something with a little more realism. And because I wanted to present a story in which kinky sex and kinky people are seen as I see them, as I know them—human, with flaws and desires, aspirations, nobility and fuck-ups.

The process of writing this book is a whole story unto itself.

Before I started writing Wrecked, I wrote some short stories and I submitted those to an anthology. They were the hesitation marks before I made the big slash that released this novel. I started on my couch and I just wrote. The first draft of Wrecked is actually called Wreck Me and is written from the Leda’s perspective, in first person present tense. It was a stream-of-consciousness writing experience that lasted about three months.

I submitted it to the contest with the mantra “The answer is always NO if you never ask” repeating in my mind. I had finished a book. And now other people, people I didn’t know, were going to read it. That was simultaneously thrilling and terrifying.

I was sure I wouldn’t hear back from them. When I got an email from the Chair of the Con, I figured there were only two reasons she’d call—either I was a finalist or she wanted to tell me they thought I should never write again.

Luckily for me, it was the former. I was a finalist. This meant that my book was passed on to the publisher for consideration and conversation. For just a moment, I want you to consider my absolute elation. My face hurt from smiling. Every few moments, I had little geysers of giddiness in my chest. I giggled at completely inappropriate moments and probably looked like a mad woman as I drove down the highway, singing all my favorites songs as loudly as possible in my car.

It was a blessing that I was connected with people who were so kind and understanding and patient with me while I was figuring it all out. Ultimately, we drastically changed the ending. It was not happy before. It is now decidedly happy. We changed the perspective, combining the two books into one. We changed the tense, making it past tense instead of present. We changed whole sections of the book to make clearer action and characterization.

And it is so much better this way.

I am so fortunate to have worked with the people that I did at Totally Bound, to have even had the opportunity to work with them through the contest. I cannot thank them enough for this opportunity and the education they gave me while we got through the process of the book. A marvelous experience with an excellent finished product, if I do say so myself. 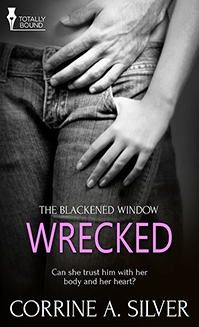 Her naiveté and his intensity fuse into a time bomb of sex and secrets. Can a young feminist and a Dominant with secrets make it work?

“The first year is the most traumatic.” Leda’s medical school advisor’s words seemed like the words of a retiring blowhard, until she met Xander.

What starts as a tutorial in anatomy quickly evolves into Xander’s desire to possess Leda. While she is drawn to him, wants to give in and experience sharp passion unlike any she has ever known, she has reservations. Can a feminist, a modern independent woman truly be a sexual submissive? Why is he holding back? What is the dark past that Xander is hiding from her? And ultimately, can she trust him—with her body and her heart?

Xander wasn’t looking for a submissive, but his attraction to Leda is undeniable. He tries to follow caution, but ultimately he has to take her, subdue her, at her insistence. The more he opens himself up to her, though, the more his past comes back to haunt him, with nearly catastrophic events when his former lover shows up at their door on New Year’s Eve. How can he keep and protect Leda from all the risks of his kink, when he knows he is the biggest threat to her wellbeing?