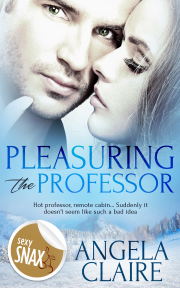 Clarie doesn’t have to sleep with Liam for a grade. But, hot professor, remote cabin… Suddenly it doesn’t seem like such a bad idea.

Liam Conner was once a literary darling, but now he’s just trying to drink himself to death in the seclusion of his mountain cabin. Not much interested in sex after the accident that killed his wife and ended his career, his libido kicks into full gear when a beautiful blonde shows up in the middle of a snowstorm.

Grad student Clarie Lewis is out to nab an interview with the reclusive subject of her thesis. When Liam throws political correctness to the wind and offers to give her an interview if she’ll sleep with him, he’s not sure whether he’s trying to drive her back out into the snow or if he really just wants to sleep with her. Both, probably.

Clarie doesn’t have to sleep with Liam, or anybody else, for a grade. But suddenly she finds herself alone in a remote cabin with a man whose prose she’s been analyzing and appreciating for as long as she can remember. The fact that he’s as gorgeous as sin in person doesn’t hurt, either.

Suddenly, it doesn’t seem like such a bad idea.

Reader Advisory: This book contains some scenes of bondage, and one scene of dubious consent.

Clarie threw another log on the fire and pulled up the cowl of her heavy-duty cable sweater so it covered her jaw and mouth. God, it was cold. And dark. The sputtering flames provided only a minimum of illumination to the pitch-dark cabin. No street lights out in the middle of the Smoky Mountains to shine through the windows. She’d never seen dark like the dark that had enveloped her when she’d turned off her car and trudged toward this cabin.

The snowstorm had hit out of nowhere and before she knew it she’d been driving into a wall of white. Cottony, fluffy snowflakes that had landed on her windshield and didn’t budge or melt. In sheer defense, she’d stopped the car—just stopped it right out there on the deserted road she apparently should not have taken and was going to kill her friend Ally for suggesting—and it was then that she’d seen it. Or rather she hadn’t. The road had ended. Dead-ended right into a cabin of some sort up in the distance, peeking through the snowflakes. She must have taken a wrong turn somewhere along the way.

Swearing, she’d contemplated turning around, but had known she probably wouldn’t make it far in the storm. She’d just have to wait it out. Doing so in her car, though, especially since she was running low on gas, hadn’t seemed like the best alternative when there’d been another one perched right in front of her. The flickering light of what had turned out to be the fire going in the cabin had beckoned. So, she’d abandoned her car and headed out into the knee-high snow.

By the time she’d gotten to the front porch, her hands had felt almost numb from the cold and she’d been shivering from the icy flakes bombarding her. Pounding on the door had yielded no response but when she’d tried the latch, she’d found it open.

There is a God.

She’d stumbled inside and felt along the wooden wall for a light switch, but hadn’t found one, lurching instead toward the fire going in the fireplace, sputtering but still alive.

She supposed the owner of this cabin must be somewhere around here. Fires didn’t light themselves. But she couldn’t worry about that now.

She dropped her canvas bag on the floor and kicked off her boots. Shivering, she curled up into a ball on the threadbare rug in front of the fireplace. Her teeth were chattering and her clothes were soaking wet, but she was grateful at least to be somewhere safe to wait out the storm.

The banging of the cabin door against the wooden wall startled her out of the beginning of a daydream in which she was warm and dry. She jumped up. “What the—?”

“Who are you?” Someone, something, bellowed at her out of the darkness and the gust of frigid wind that accompanied the open door. The door slammed shut with the same force it had opened with and he—she guessed it was a he, not an it—advanced until he was within the scanty light of the fire.

“Who are you?” he asked again, not quite as loudly, which she appreciated since the mere sight of him was terrifying enough. Bundled up in some floor-length fur parka, a hood all but obscuring his face, the guy looked to be about ten feet tall. She didn’t need any overwhelming audio.

“I’m, ah, I mean my name is, ah, Clarie Lewis,” she stammered. “I stopped here to get out of the storm. It was impossible to drive through it anymore.”

“So you thought that gave you a right to barge onto private property?”

“Save me the excuses. Get out.”

The order was delivered with such finality that for a moment she was just plain flabbergasted. But then all the frustration of the day, the wrong turns, the trudge through the freezing snow, the ice seeping through her new boots, came crashing down on her and she surged to her feet.

“Now, wait a minute. You can’t kick me out of here. There’s a friggin’ avalanche out there.”

On her feet, she saw he wasn’t quite the giant she had first thought. Six three or four, tops. But a lot bigger, of course, than her own five feet six. It was hard to tell with the parka still on, but she’d bet he outweighed her by a hundred pounds as well.

“And you can spare me your indignation. Please. It’s my cabin. Or does private property mean nothing to your type?”

She didn’t venture a guess at his categorization of her type. Maybe he thought she was a hippie backpacking through the mountains. She didn’t have a clue.

“I own this space. The warmth of that fire.” He gestured to the howling clatter beyond the cabin window then pointed a gloved hand toward his chest. “The protection from that wind. Mine.”

She shivered as he pulled his gloves off and threw them onto a nearby chair.

“If you want to share any of it, you’ll have to make it worth my while. What do you have to bargain with?” he asked nonchalantly.

“Bargain with? Of all the insulting—”

And he’d suddenly started talking about what she had to bargain with? Every Lifetime movie she’d ever seen flashed through her brain. Winsome young graduate student—well, soaking wet, freezing young graduate student anyway—finds herself in remote, middle-of-nowhere rustic abode in the arctic woods, with a hovering, lurking, overpowering nutcase. Male, it goes without saying.

What the hell was I thinking wandering into a strange cabin like this?

She eyed the poker for the fire, trying to calculate whether she could reach it before he reached her. Since actual odds had never really stopped Clarie from doing anything, she lunged toward the fireplace, intent on the poker, and did not even register at first as to why she didn’t reach her goal. The mountain man had moved so quickly that the poker was out of reach—flung across the room, in fact—before she could even think of grasping it, and his fingers were wrapped, tightly, around her wrists, which he held apart. He stared down at her.

Although most of his face was covered by the sides of the fur hood, she saw from the apparently proprietary firelight that his eyes were a deep green. Forest-green. Hunter-green. And they bore down on her with an expression that she had never had any trouble recognizing from the time she had been seventeen or thereabouts.

Her world had been falling apart then, crashing down on her, and she had felt so broken that she thought she’d never notice anything around her again. Not the peeling smoke-singed wallpaper in the hallway of the first flat they’d taken her to. Not the springs scraping her backside when she’d sat on the dirty couch after the social worker had left. Not even the names of those first foster parents. But that night she had noticed something instinctively, self-protectively, as soon as she’d seen it. She’d noticed the look in the eyes of the man who, blasphemously, had asked her to call him ‘Daddy’. She’d recognized the look for what it was as the balding, rough-whiskered stranger had stared down at her, ignoring her teary eyes and focusing on her burgeoning cleavage. It had been glassy, primal. Dangerous. The look of a man who’d been about to let something out. Something he didn’t show the rest of the world. She’d sprung up from the dented couch, sprinted out of the flat and caught up to the social worker before he’d even started his car.

She had lived in a facility after that, safer in a crowd. And though she had run into predatory lust here and there before she’d managed to escape to college, she knew how to protect herself from it—scream her bloody head off.

But there’s no one around here in the woods to hear me if I do.

Okay, now she was really scared.

The mountain man stared down at her, a smile forming. She noticed that he had very straight, very white teeth. Dental care had apparently made its way up to the Smokies.

“Believe me, I’m not that hard up.” He dropped her wrists and turned away.

As a teen, Angela Claire worked in a graveyard, mowing lawns. She thought it was the worst job she'd ever have. Unfortunately, she went on to practice law. Once free of that horror, she turned to writing and has published over 20 books. Her stories always include a sassy heroine because she doesn't know any other way to write them and a hero who's to die for. When she isn't writing, she'd rather be.

Share what you thought about Pleasuring the Professor and earn reward points.