What can we expect from your addition to the Wild After Dark anthology?

Wendi: Heat and tension. In my story, Taken In, the humans have been pushed into servitude to the supernaturals. The vampires and shifters can order the humans around, but what if they don’t want to? What if the human doesn’t want to comply? Talk about tension. Vic and Gale, my supernaturals, don’t like to follow the crowd. They’ve got their own ideas on how relationships with the humans should go. They’re also taken with Kitty, their human. Expect heat, heart and tension as these three figure out how to make a relationship work despite the world falling apart around them.

Aurelia: I think regular readers of my stories will know what to expect from a piece of mine in an anthology like this: a story that isn’t afraid to go twisted and bloody and romantic at the same damn time—“Intervention” is all about the darker side of love. I think new readers should be warned. ;)

Nan: My story is about ancient ways clashing with modern life and breaking personal and societal taboos.  Taking the universal theme of taking chances in who you love, I use an extreme example of two lovers: one vampire and one werewolf, and the human woman they fall for.

What do you love about paranormal romance? 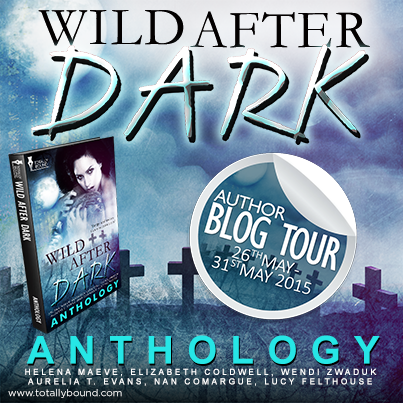 Elizabeth: It really allows you to get creative as a writer. There are certain basic rules about paranormal beings – vampires drink blood, werewolves are influenced by the full moon – but when you’re dealing with characters who aren’t human, you can let them behave in ways a human couldn’t. I also love considering the prospect of how you would cope if you discovered your lover was immortal– would it change the way you felt about them?

Helena: The possibilities. You can get away with a lot of silliness when your characters can climb walls in a single leap or fight off assailants with a growl, but paranormal elements also bring in the wonderful complications of different species or castes, or enmities that can mirror our world without forcing us to pick sides. Plus, it doesn’t hurt that growly, single-leap-wall-jumping characters tend to be pretty sexy.

Is there a lot of research involved when using supernatural characters?

Wendi: Writing paranormal means busting open the doors of convention, but there are some things that have to be right. The wolf shifter has to have qualities of a wolf. If he meows, then you’ve got issues. Some of the characteristics of the supernaturals have to do with the character’s personality, but if he/she is a vampire, then desiring blood is a must. If you don’t have your details right, readers will notice.

Nan: I’m a fan of the genre, dating all the way back to my teenaged love of Buffy the Vampire Slayer and Anne Rice, so I’m pretty well versed in the common conventions.  I like putting twists on the usual plot devices and using the supernatural elements as points of tension in the story.  In Darker Nights, as well as in previous stories, I’ve had the heroine struggling with the choice of whether she can (or should) “turn”.

Lucy: For the most part, no. From a writer’s perspective, this is another great thing about paranormal—you can simply make up your own rules! Yes, if you’re setting a story in the “real world” then it’s got to be feasible, but the paranormal element means that what the characters do, how they behave, what their powers are, etc, can be completely of your own fabrication. It’s very freeing.

I imagine writing a story like this involves a lot of thinking outside the box! What made you choose your setting?

Helena: I love dystopian locations. I routinely retweet pictures of abandoned buildings or post-apocalyptic cityscapes, and something about Beyond the Poison Chalice just seemed to fit a distorted future. I wanted a town divided into fiefdoms, our modern ways almost but not quite reverted back to feudal times. I also wanted a setting that mimics the cruelty my characters face in the story. When you start off with a plume of smoke rising from freshly burned bodies, you know you’re in for at least a little bloodshed.

Lucy: My setting is actually pretty ordinary! My story takes place in a bar, in a car, and in a bedroom. They could be any bar, any car, any bedroom, really. It’s the action that goes on in those places that is exciting ;)

Wendi: I wanted a setting that was familiar, but different. My story takes place in the future in a world where the humans don’t have power. It’s a scary thought, humans not being the apex predator. Now add in vampires being scary critters because they are thought to be dangerous, wanting to kill and evil. Wolves aren’t necessarily evil, but given human characteristics when they shift, they could be really dangerous. I wanted to convey those different types of danger, but to put a sexy spin on them and to show that just because something is seen to be evil, it might not be.

What does your title allude to?

Aurelia: Intervention refers to the instigating event of the story: The third person in Emily and Land’s small extermination business has turned into a werewolf. Emily and Land are distressed that Matt ran away post-bite, and they’re trying to lure him back and convince him to stay with them so they can get and give him the help he needs. Intervention begets intervention, however, each more horrifying than the last.

Nan: Darker Nights is a riff off of the heroine’s last name, Darker, which is also the name of the law firm her family has run for generations.  Naming characters is one of my favourite activities when writing and I try to search for meaning, even obscure ones, in every name.  For that reason, I can often be found trawling baby name websites and, yes, even court dockets, for interesting new names.

Elizabeth: Steal Your Soul Away is taken from the song ‘Dancing in the City’ by Marshall Hain, which is something of a forgotten Seventies gem (go look it up on YouTube, people who are too young to remember it…). The lyrics are all about having fun in the city once the sun goes down, which fits completely with the anthology’s ethos. As is often the case with me, the title came first and the story followed. 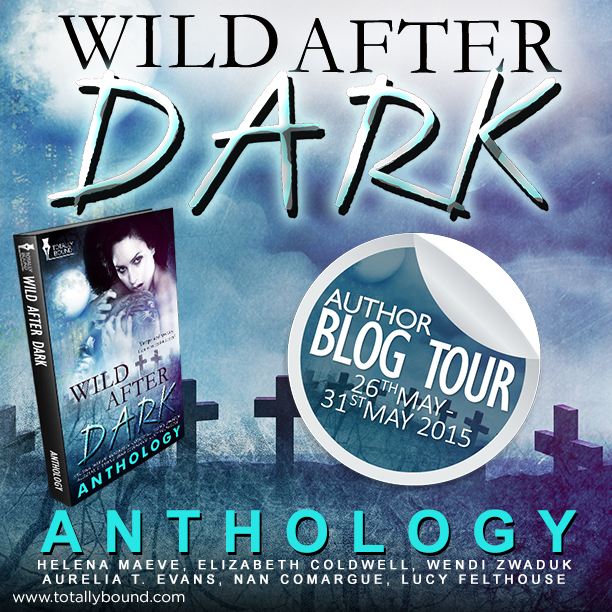 What’s your favourite aspect of your short story?

Aurelia: I think my favorite aspect is the premise of the paranormal extermination business—because it’s not all vampires, werewolves, demons, and poltergeists out there. Sometimes the demon-y shit going down is much smaller and much more infested than the usual suspects. I feel I didn’t go into near enough detail on the matter. I might have to resurrect the idea in a future story and tease out some more information.

Helena: The shameless, shallow answer would be the kitchen sex. The more serious answer is the riff on who, really, is the monster in this story filled with monsters.

Check out the rest of the Wild After Dark blog tour and see what else our authors have to say about this newest release!

Like the sound of Wild After Dark? Buy it here: https://www.totallybound.com/wild-after-dark