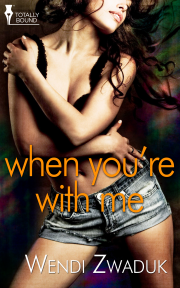 When You're With Me PRINT

A topless dancer plus a cynical cop doesn't equal a lifetime love…or does it?

There's more to Jude Nelson than just a sequined thong. She has big dreams of becoming an artist. There's one tiny wrinkle in her plan-she'll never forget the bloody image of her friend's battered body in the dumpster.

Who can a nude dancer turn to for help? Certainly not a hardened undercover cop…

Detective Drew Alwyn is on the case to find out who murdered his good friend and fellow officer. But the moment he sees Jude, he can't look away. He has to decide which is more important-his dedication to his job or the girl who holds his bruised and battered heart.

Will these two opposites come together to solve the case or will their desire consume them?

Reader Advisory: This story contains scenes of bondage, mentions of drug use by secondary characters, silk, sequins and art supplies used in foreplay, voyeurism and a little spanking for good measure.

Let's say you will be overcome :-) with a little suspense and a lot of pleasure.

The characters, both new and old, are expertly detailed, and very believable...There are more twists and secret, but you need to read this for yourself to learn the whole story.

Share what you thought about When You're With Me PRINT and earn reward points.