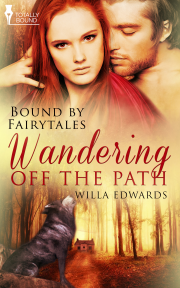 Wandering Off the Path

Book 1 in the Bound by Fairytales series

On a moonlight walk down a shadowy forest path, Abigail discovers all she's ever dreamed of in the form of one sexy Wolf.

Abigail has always wanted more than a quiet life living with her grandmother has offered. The only thrills she has are her monthly trips to market. While returning from one of these excursions with a basket full of goodies, she is approached by a stranger on the road. He offers her all the pleasure and excitement she could ask for, if she's willing to wander from the safety of the path. Too frightened to take advantage of his offer, Abigail flees, afraid of what will happen if she strays from the path she knows.

But Wolf isn't willing to let this interaction, with the fiery, curious red-caped woman, be his last…no matter what he has do to convince her otherwise.

When Abigail returns home her grandmother is missing and the alluring stranger has taken her place. As Wolf shows Abigail exactly how much pleasure and excitement he can give her, she finds staying on the safe path increasingly difficult. But if she gives into his offer will she be forever pushed beyond the way she knows, never to return again…or will she receive all she's ever wanted and more.

Share what you thought about Wandering Off the Path and earn reward points.