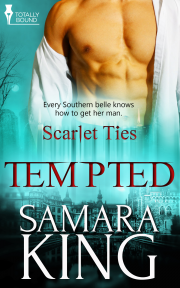 Book 2 in the Scarlet Ties series

Every Southern belle knows how to get their man, but Noely Lamont ends up seducing the wrong Rayven brother.

Future Queen of the Companions, Noely Lamont, has her sights set on Cyrus Rayven, the Deiwalker who vehemently ignores her advances. She wants to bring him down to his knees—but she didn’t count on meeting her match in Rayven’s twin brother, Coye, or the red-hot passion that he ignites in her body.

Coye Rayven can’t be more intrigued by the hellion that has her sights set on his recently engaged brother, Cyrus. He’s more than happy to do him the service of taking care of Miss Lamont, though—starting with her lusty appetite that rivals even his. Coye finds himself tempted to claim the beauty as his own. Body and Soul.

Reader Advisory: This book contains scenes of voyeurism and a brief reference to F/F intimacy.

“You know what you must do?” Damara asked in that calm, soothing tone her daughter had come to lean on.

Noely Lamont squeezed her eyes shut. She knew her mother’s strength was dwindling due to the cancer, could feel it in the telepathic connection they shared. “Yes,” she answered, biting her lip. “I know I must find Cyrus Rayven. He is the chosen one for me—my mate.” She’d learned of him a few months ago during a heated conversation with the high counsel, the Rites of Old, and yet, it seemed unreal. She’d never been the type to really care for another telling her what to do, but her mother’s instruction was different. Her mother was dying.

People thought Noely the crème de la crème of socialites. Those people could kiss her ass. She was the daughter of Senator Lawrence and Damara Lamont of Atlanta. A Southern debutante removed to the gray skies and icy temperatures of the Windy City.

Noely didn’t give a damn what people thought of her. She never had. It unnerved her that some thought they knew what she was about, as if they counted the seconds before she was caught up in some sex scandal.

“The fate of the Companions rests with you, Noely. It is our breed that balances out the Vampire nation. You must mate with Cyrus.”

Noely knew the threat of the diseases humans carried was one of the reasons mating between Companions and pure humans was forbidden. The survival of her people depended on the Vampires, though many of them thought her race inferior. She despised the idea of being sexual chattel for any being, Vampire or not. Noely had never agreed with that part of her legacy. She believed in freedom and she was rapidly aware of her own being erased.

What the hell was the point then of being royal? The idea of settling for a man who thought she was inferior made Noely furious. She’d fought against her duties as a Companion princess until her mother had become ill. Now she found herself cornered by rules that condemned her to a loveless life.

“You are the last of the royal family, as foretold by the Rites of Old,” her mother replied “You must mate with a Deiwalker. There are only two of the race who walk the earth, who are able to withstand the sun. You are the future queen of the Companions and the royal line must be preserved as our blood is intertwined since the reign of Asinah.”

She felt a knot forming in her throat. The future of her people was in her hands. Some queen she’d make, not to mention a mother. The thought of motherhood made Noely’s stomach lurch.

“Don’t be nervous, my daughter. You were predestined for this life.”

“I wonder if the Rites of Old would share in your certainty.”

Her mother chuckled. “I am the queen, you know. I’m not second-guessed much these days.”

Damara chuckled. “Capable? Darling, I remember being told that I had to carry on the line and thinking surely they had the wrong person, but you learn and grow.”

At twenty-eight, she hardly believed that there was anything more to learn about the Companion way of life. Her strong will had been beaten down by obligation, her girlhood dreams of meeting a man of her own choosing to share her life with, dashed. “Yes, you’re right, of course.”

“I remember I didn’t feel any real connection to your father when I first met him, but the more time we spent together the more I came to love him. And look at us now.”

“You and Father are wonderful.” Still, Noely couldn’t shake her distaste of forcing herself to love someone. It should be a natural process, but what—if anything—in her world was natural?

“I must go. Your father will be home soon.” Damara sighed. “I’m feeling a little tired. He’ll be upset if he learns I haven’t been sleeping.”

Noely hated to hear her mother sound weak when she knew the woman she loved dearly was the opposite of what her declining health portrayed. “Rest, Mother, and give Dad my love. I won’t let you down.”

“You never could, sweetheart.” 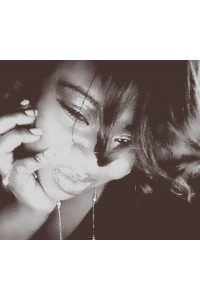 Share what you thought about Tempted and earn reward points.