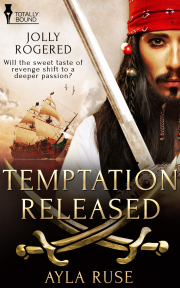 “When is a pirate not a pirate? When he refuses to ravish a perfectly willing captive.” – Lady Elise Clifton

Raphael de la Torres, the pirate captain El Angel, is notorious for kidnapping travelers to the colonies. He leads a rewarding life, and one that cleverly covers his true purpose—getting close to the cousin who betrayed him.

Raphael’s latest capture, the beautiful Lady Elise Clifton, is the one person whose ransom will give him an edge. Simple plans are rarely simple, however. He must deliver her untouched in order to have his revenge, but Lady Elise is desire untapped, and more than ready for the taking. His every effort to frighten and push her away only excites her and tests his limits of control.

Lady Elise is desperate to get out of an unwanted engagement. She will do anything to avoid being under another man’s control, even seduce a pirate to ensure her ruin. To her mind, once the Captain ravishes her—as all notorious pirates do—she will be free. Her plans would be perfect if the Captain would cooperate, but no matter how hard she tries, the sexy Spaniard refuses to take her to his bed.

With the currents stirring up between the two, will the sweet taste of revenge shift to a deeper passion, and will the control Elise is running away from, be exactly what she needs?

“It is so blasted hot,” Lady Elise Clifton complained. She’d stripped down to her chemise and was pacing the cramped cabin, praying for a cool wind to slip through the tiny porthole.

“You could go up on deck, you know,” stated her companion, Brianna. “There’s wind there.”

“I know, but I have to make sure I’m packed. You go on ahead if you want.”

“I might. I’ve watched you go through this bag every day for the past week.” Brianna upended the cloth satchel and repacked it, naming each item as she did so. “Look, you have a pair of slippers, a day dress, a corset with your money sewn in, the breeches and shirt I stole from my brother for you, a brush and ribbons. Same as yesterday. Same as the day before. Nothing’s changed. Besides, if we are attacked, I’m sure the pirates won’t be gentleman like and ask for your luggage.”

“You’re probably right, but if I’m to go through with this—”

“Yes, if we’re attacked, then I want to be ready. I’ll not begin my new life empty handed and shy.”

“Like there ever was a shy bone in your body,” Brianna mumbled.

Elise heard and chuckled. “You know me well. And you do know what you’re to do if a pirate comes for us, right?”

“Do exactly what he says.”

“You sure you’ll be all right?”

“Elise, I’m here, aren’t I? I could have stayed in , but I’m the one you’ve confided in all these past months. I couldn’t let you do this alone.”

Brianna’s brother, Elise had discovered several months ago, was a sailor in the British Navy, and he’d often write to Brianna with tales of the pirates they’d captured or those who had run away. When Elise’s father had determined she move to the colonies, Elise had paid closer attention and latched onto the tales, yearning to live the life of a pirate, a life full of independence.

“I’m this close,” she said, pinching her fingers nearly together, “to having the freedom I want, Brianna.”

“Well, your idea of freedom and mine are two different things. I still say we should have switched places. You could’ve been me and I would’ve assumed your identity. No one on this ship knew us when we boarded and surely no one will know us in the colonies.”

“And you know I wanted to, but my uncle would recognize the falseness in an instant. I told you that my father sent him a portrait of me barely a year past.”

Brianna screamed. “What was that?”

Elise turned to the sound and rushed to the window. “Damn, I can’t see from here. It sounded like a cannon.”

Another shot rang out and Elise spun around. “I bet we’re being attacked,” she said excitedly. “It’s time.”

Elise caught Brianna’s wide-eyed stare and laughed. “Don’t look so aghast. You know this has been my dream for months. With any luck, by nightfall I’ll be onboard the pirate’s ship and, if things continue my way, I’ll be debauched, lying in the captain’s bed and free from marriage.”

“You’re crazy, you know that,” Brianna said, a tremor in her voice. “Remember my brother writing about how violent pirates can be? And smelly? And ugly? You could wind up dead in the pirate’s bed.”

Ah, a sexy Spanish pirate with an accent that would melt steel. What more could I ask for. This was one hot and sexy read, a short story with bite. I read the whole thing at one go, couldn’t put it down....

Share what you thought about Temptation Released and earn reward points.