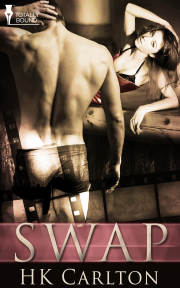 Hailey Hollinger has it all—a great husband, a fantastic career in journalism, good friends…and one hot brother-in-law that won't stay out of her fantasies.

When Hailey Hollinger was eighteen she thought her boyfriend, Brent, was the best-looking guy around. That was until he introduced her to his older brother, Mike. From that moment on she had the biggest crush on him and he became the star of all her teenage fantasies.

Hailey's all grown up now and has been married to Brent for three years. They have great careers, a nice house—they enjoy life and each other. Everything is supposed to be perfect. Except for that pesky little infatuation with her husband's brother has never completely gone away.

A crush, by nature and definition, is supposed to be short-lived and should diminish over time. But, unfortunately for Hailey, it hasn't, and it is beginning to mess with what she thinks should be perfection. And if her life is so great, why does she then find herself groping her brother-in-law in the cab of his truck like some sex-starved teenager? And the biggest question yet—why is he groping her right back?

When I was eighteen I thought my boyfriend, Brent, was the best-looking guy around. That was until he introduced me to his older brother Mike. From that moment on I had the biggest crush on him, and he was the star of most of my teenage fantasies. At the time he was twenty-five and newly married, but that didn't stop my overactive imagination. I was so shy back then, and every conversation with the man left me a blushing, tongue-tied mess.

Even now, sometimes he could still make my poor cheeks suffuse with crimson. I was twenty-six, had been married to Brent for three years, had a great career in journalism and I was sketching outlines for my first novel.

Brent and I both had great jobs, although he travelled a lot. We owned a nice house. We enjoyed life and each other. Everything was supposed to be perfect—except that my infatuation with my brother-in-law had never completely gone away. A crush, by nature and definition, is something that's supposed to be short-lived and should diminish over time. But, unfortunately, mine hadn't, and it was beginning to fuck with what I thought should be perfection.

Mike and his wife of eight-plus years now, Cheryl, lived nearby. They seemed fairly happy too, until you looked a little deeper, which I often did. With Brent away so much, I spent a fair amount of time with Mike and Cheryl. I spent time with my friends too, but Mike and I had a lot in common, and not only interests-wise—we were both creative. I had writing and he had this passion for photography that I thought I'd finally convinced him to pursue. He worked in construction and I knew he hated it, especially now that he was getting older and his back and his knees had started to protest his constant activity. I mean, thirty-three wasn't old by any means, but it wasn't just his body that it was taking a toll on. He wasn't happy, and I knew from my own experience what a rush it was to have an article published or some kind of recognition for a job well done. Mike's work was really good and I knew in my heart that he could make a go of it, if he would just give himself the chance.

And how did I know all this? Well, even though we did a lot of things together as couples—when Brent was home, which wasn't often—lately, it had just been Mike and me. We found ourselves spending more and more time together. Cheryl was often busy with her newest get-rich-quick scheme. To her, life was all about money and other people's perceptions of her. She liked people to think that she and Mike lived a whole lot more comfortably than they did. Brent, when he wasn't away on business, had a passion of his own. And it wasn't me. Currently, she was housed in the garage under a car cover. She was sleek, shiny and black—four hundred and six cubic inches of raw power that I couldn't compete with.

I walked out onto the back deck where my friend from college, Kate, and my sister-in-law Cheryl sat comfortably in my new puffy deckchairs. Katie passed me a vodka cooler as I threw myself into the overstuffed cushion.

"I don't know what to get Brent for his birthday. Any suggestions, ladies?" I asked, hoping for some burst of inspiration.

"Get him a new chamois for his hot rod," Kate suggested cheekily, knowing full well how I felt about the third wheel, so to speak, in our relationship. I'd complained to her on more than one occasion that he spent more time with the shiny machine in the garage than with me. "God knows he's probably worn the one he's got out by now."

"Mmm." I gave Kate a black look. "Lucky girl gets rubbed down more than I do."

"Oh, don't be so hard on him. At least he's at home, Hailey. He's not off running around. And he thinks you're just as hot," Cheryl said, pointing the neck of her cooler at me. "The first thing he'll do when he walks through those doors is grab your ass and plant a big sloppy one on you. We've all seen how he gropes you. It was fine when you two were teenagers but geez, now it's just gross."

"Sounds like you're jealous to me, Cheryl," Katie shot back in my defence.

I couldn't help but be pissed off at the slur that maybe we were not worthy of being envied. I narrowed my eyes at her in a silent question, and she scrambled to explain. "What I meant was, you two are still practically newlyweds. Wait until you're married as long as Mike and I—then you'll have plenty to bitch about."

From where I stood, she had nothing to bitch about. Mike was awesome. I mean, I realise you always think the grass is greener…but I could pick out more faults in Cheryl, not only in her character but also as a cause of the problems within her marriage, than I could in Mike.

Physically, the brothers resembled each other quite a lot. Both tall, six foot two-ish, blond, blue-eyed, muscularly built—Mike because of his work, Brent because he worked at it in the gym. You knew right off that they were related, but that was pretty much where the similarities ended. Brent was outgoing, boisterous and opinionated. He needed to be on the move, he always needed something to do to occupy his time. A new project, whether it was home improvement or restoring his newest four-wheeled obsession. He couldn't just relax and have a few beers or watch a movie. Mike, on the other hand, was quiet and intense. Introspective. Like me, he was a homebody—which Cheryl couldn't stand. She wanted to be out and about, being seen and heard by whoever would give her some attention.

Swap was an excellent read that kept me captivated the entire time. Hailey and Mike's struggle of their attraction to each other was incredibly well written - I could feel the tension between them myself...

Share what you thought about Swap and earn reward points.