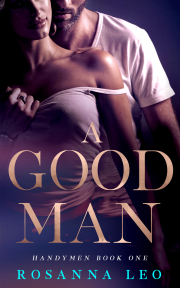 Share what you thought about A Good Man and earn reward points.

This is the 1st in a new series and is Michael and Emily’s story. Michael has a successful home improvement show and signs up to convert Emily’s grandma’s house into a store for her homemade soup business. These two are both haunted by demons and the chemistry between them is explosive. No spoilers: this is a definite must read, you will not be disappointed. This is a well written tale which is filled with drama, emotion, which all leads to a steamy and all-consuming read with engaging characters. I was totally hooked throughout this addictive page turner, and I look forward to reading more from this talented author.

This author gave me a magical read in that it kept me smiling and my heart happy even through the rocky times. The characters were very well defined and down to earth with everyday problems I could easily relate to. The character's charm and actions made me feel like I knew them and had for years. As for the storyline - just wow… it was written to the point I felt like I was right their living the action with the “Handyman Crew” both on and off the set. Kudo’s Ms. Leo for a very enjoyable read.

The book is appropriately named because Michael, the hero/star of the book, is just that: a good man - despite what he believes of himself. Michael is the star of a handyman show but he is also a local hero due to a past incident. All Michael wants is for people to leave him alone, let him do his show/handyman work and somehow find some peace in his head. But when he meets Emily, the owner of the home for his next TV project, everything changes. She brings him a sense of calm and happiness (even though she’s engaged to another) yet the more he gets involved with her personal issues the more his demons rise to the surface. Will Emily convince Michael to get the help he needs before it’s too late? Will Michael finally seek help so he can live a normal life and be the kind of man Emily and others think he is?

Review by The Word Nerd Reviews

In A Good Man, Rosanna Leo has once again woven an emotional journey of betrayal, trauma, love, and most importantly, hope.

This book, A Good Man, is the first in a new series titled The Handymen. I have a feeling that the series will follow the Zorn brothers, and if so, I can’t wait to see who is up next. All the brothers are fantastic men in their own right, and it will be fun to watch them succumb one by one to love.

A Good Man is about Michael Zorn and Emily Daniels who are both emotionally damaged and vulnerable, but together they overcome the obstacles to find peace and hope. As expected in a novel from this author, the characterisation is extremely well done. Both Michael and Emily are genuinely likeable people. Yes, they have their flaws, but let’s face it perfection is boring; however, their shortcomings are not of the malicious or vindictive kind, merely the results of their past experiences. As for Michael, well, I dare any woman not to fall even a little in love with him. He is certainly book boyfriend material!

In A Good Man, Rosanna Leo

has delicately dealt with the matter of PTSD outside of a military setting; raising awareness that PTSD can occur after a wide range of circumstances and that it is not restricted solely to members of the armed forces. For the sufferer, it is the belief in their guilt and their self-condemnation for surviving the incident that leaves them feeling isolated. However, they are not the only ones affected by their illness; those around them also feel isolation and a sense of frustration and helplessness that they are not doing enough to help. The many sides and emotions of PTSD were sensitively identified and demonstrated not only by Michael, but also in the reactions and emotions of Emily and his brothers.

This author always has an engaging writing style; with the ability to capture and hold your attention from the first page to the last. Rosanna Leo does not shy away from emotional triggers; instead, she chooses to face them head-on, and in the case of A Good Man, the result is an addictive read that you will not want to put down until the end.

I would recommend any of this author’s books, but I particularly enjoyed A Good Man. It is light without being fluffy. It is emotional without being too heavy or overly dramatic. Overall, it is a fantastic weekend read, but I’d recommend not starting it at night if you have to get up early the next morning!