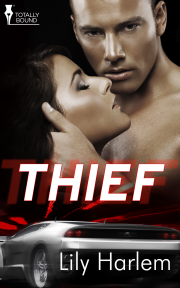 Stealing cars was easy when hot wiring was the key, but now Kat has to rely on more seductive methods to earn her living. When ex-military loner, John, becomes her latest victim, this sexy little thief soon realises she's bitten off more than she can chew.

Kat uses her female charm and womanly attributes to pinch elite cars for her unscrupulous boss, Carlos. But when John Taylor becomes her latest hit, Kat finds herself at the receiving end of a gentle, expert seduction by a man who's not all he appears.

Despite their night of passion, Kat has no choice but to take John's car—Carlos knows where she lives. What she doesn't bargain on is so does John!

In a week of sex and danger, honesty and kink, the immoral couple become inextricably tangled in one another's lives. Emotions and desires reach boiling point as they push each other to their limits in and out of the bedroom.
Can each handle the other and will they ever be able to trust one another enough to open their hearts?

Kat refused to ride the bike in her skirt so they sat in stony silence in a cab. Kat sensed John looking at her as if he was about to say something but kept stopping himself. In the end, he leant forward and said a few hushed words to the driver.

When they pulled up, they weren’t on Oxford Street as she’d instructed. They were parked in a decidedly seedy looking backstreet. “Hey, why are we here?” Kat demanded with a frown.

“I thought I’d show you my type of shopping.” John leant over her bare thighs and swung open her door. “After you.”

Kat muttered under her breath but curiosity got the better of her and she stepped out over the foul gutter onto the littered street. “There’s no shops around here,” she tutted as John unfolded out the cab next to her.

“Over here.” He wrapped an arm around her waist and urged her to the left. They passed a row of rancid wheelie bins, a boarded up house covered in graffiti and a deep doorway with a hunched figure cocooned in a ripped sleeping bag. They came to a stop by a steel armoured door. A chipped sign read ‘Over 18’s only’.

Kat glanced at the window next to it. It was blacked out with rough strokes of thick paint and protected by solid steel railings. “What sort of shop is this?”

It made her mad when he acted all superior, like he knew something she didn’t. It was exactly how teachers and social workers had always spoken to her. Like she was missing the point, not grasping life, when she actually did. She got it better than most. Keeping her head above water was the name of the game. She wasn’t interested in the rest—that was superfluous. “Well, if there’s no Prada, I can’t see how it will appeal,” she huffed, feeling her mood tighten.

“Oh, I think it will.” He tapped his finger on the end of her nose and pushed open the door. “You just don’t know it yet.”

A tinny bell sounded as he shooed her inside. The air was musty and stale, the lighting subdued and she had to lift her feet over curled orange lino.

“Mornin’.” A deep, male voice came directly from her left. She spun and was faced with an enormous middle-aged man. He sat by an ancient malt brown till balanced on a grainy security screen.

Sweat droplets hung on his forehead, and his shirt was unbuttoned way down low, revealing flushed red skin splattered with moles and grey curls. His eyes loitered down Kat’s shapely, exposed legs, and he swept his fat tongue over his lips.

John nodded at him, a muscle flexed in his jaw, then he tightened the hold on her waist and steered her past shelves stuffed with intriguingly shaped items.

“Bear it in mind,” John said through gritted teeth, parting a heavy bamboo curtain and pushing Kat through it.

In the next room, each of the four walls were crammed full of DVDs, all highlighted by spotlights. The spotlights made it far too warm, and Kat felt her cheeks flush. “What are we doing here?” she asked again, finally stopping her forward momentum now John had removed his hand from her lower back.

“I thought we could do with some light entertainment.” He flicked his gaze around. “There’s not much on TV we both want to watch.”

“What are you on about?” she snapped.

Kat shook her head incredulously. “You brought me here because of that?”

“No.” He lowered his head to hers. “I brought you here because I want to get to know the real Kat, what really turns you on. You choose a DVD and so will I. It will be very revealing about our deepest, darkest desires.”

Kat swallowed. He was challenging her again, daring her to pick a subject. Something that would get her hot then he would nag away at it like a fingernail on an insect bite.

“You never know,” he went on. “We might choose the same fantasy and then we’ll know we were destined to be together.”

“Oh, shut up, will you? This is a business arrangement, as well you know.”

John shrugged and lifted his brows.

“What’s that look for?” Kat demanded.

“Business partners don’t usually get quite as intimate as we have.” John twitched his brows.

“Have, that’s right, have in the past tense.”

He winked again, and before she could move away, he pressed a sharp kiss to her lips. “We’ll see. I’m going to have a look at the stuff in the front room. You start browsing.”

Kat slammed her hands to her hips and tutted. Why was he kissing her, and what the hell did he mean, ‘we’ll see’? She spun away from his retreating back; she didn’t want to look at his perfect, denim-encased rear.

Her eyes peeled over the titles in front of her. Lesbians lick Lilly, Cunts that Beg, and The Sailor’s Sperm Wails were just a few. She reached out a finger and touched the frozen face of a woman on the cover of a yellow box. She had a similar look to Kat. Long black hair, generous breasts with dark nipples and green almond-shaped eyes topped with neatly arched brows. Kat moved closer.

The woman was bent on all fours, and the torso of a dark-skinned man could be made out behind her. He was clutching her hips with curled fingers and was also on his knees. Whatever he was doing had her mouth wide open in a scream of ecstasy crossed with something that looked scarily like agony. Her eyes were wide but glazed, her tongue flat on the base of her mouth, a droplet of sweat perched in the hollow of her neck.

No, she didn’t think so. Suddenly, she wanted that DVD. Not to show John what she’d chosen, but she wanted it for herself, to watch, to see what it would be like—the big taboo of sex.

She moved to the bamboo curtain and peered through a gap created by a missing string. John stood at the till, talking to the cashier. She glanced up at the security camera in the corner. It was facing her, but she reckoned it was worth the risk. The sales guy seemed pretty distracted. She walked back over to the DVD and, with lightning speed, dropped it in her bag. Just as John parted the curtain, she stuck out her hand and reached for another DVD.

“Found anything?” he asked lightly.

“No, but clearly you did.” She nodded at the bulging brown bag in his hand.

“Yeah, just a few essentials.” A half smile tipped his lips. “What’s that you’ve got.” He loomed next to her and twisted the DVD she gripped in her hand. “Seven Days and Seven Nights—Bound and Gagged.” His mouth broke into a full wattage grin. “Well, if I’d known that was what you wanted, Pussy Cat, I would’ve been more than happy to oblige.” He pushed a finger to his temple as if in deep thought. “In fact, I think I did suggest it.”

“You’re all talk and no action, John, so just shut up, will you?” Kat couldn’t believe the apt title of the DVD she’d grabbed in haste.

“I think we both know that’s not true.” His eyes glistened, and his voice deepened an octave. “You know full well I can provide the action, you just got to say the word, baby.”

Kat slammed the DVD back on the shelf with a clatter. “Let’s just get to Oxford Street. That fat sweaty guy gives me the creeps.”

Kat and John do what they need to do to get by - and then their paths cross. John is Kat's job - her mark. A fast paced book which takes place mostly over the space of one steamy week. John is none to...

Share what you thought about Thief and earn reward points.