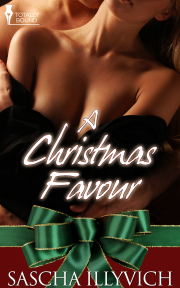 Can love unite two best friends that yearn for each other, even after years have passed?

Angela does have the blessed luck to have a best friend with a very handsome body and a kind heart. She's managed to end up single during the holidays and having Christian come up from Houston to cheer her up has made a huge difference in her life. Things were going fine until a little playfulness became arousal and they ended up making damn sure neither suffered a cold winter night together!

Christian has been incredibly blessed with his life. He's been given the IT job of his dreams, has the income he needs to feel secure and has the support of his long time best friend, Angela. What more could he ask for? Well, turns out he asked for her in his bed, over and over again and he wound up getting it. But his work schedule interferes with their relationship and causes heartache on both sides. Will he be able to figure things out and convince her that he's the one for her?

Publisher's note: This story has been extensively re-written and re-edited for release with Totally Bound Publishing.

“Oh, I’m so glad Thanksgiving holidays are over now.” Angela sighed and turned to Mike, gathering a sack of groceries from her car.

Mike took the bag from her. “I know what you mean. Now we’ve got to make it through the Christmas holidays.”

He followed her up the short steps into her apartment.

“I’m going to get my place ready for a spiritual cleansing this week. It’s been a long time,” she continued.

Mike cocked an eyebrow. “You actually do that shit, huh?”

She smirked. “Yes. You knew that about me before we started dating.” She took the sack from him and started putting things away.

“I do.” Mike reached for Angela’s hand and took it in his. He kissed it as he gazed longingly into her eyes. “I love your eyes, Angela.” He leaned towards her lips and kissed her. She hesitantly pulled away from him.

Mike looked puzzled. “Is something the matter?”

“No. I’m just tired. I didn’t sleep well last night. I think I’d better turn in early tonight. It’s Friday, and I’d like to get some rest. I hope you don’t mind.” She tried her best to look sad, and the puppy dog look won out.

She stuck her tongue out at him. “We’ve been over the meat issue many times before. I’ve just never been a big fan of red meat.”

“I know. I’m mostly picking on you anyway, but I am concerned about your health. The protein—”

She pressed two fingers against his lips in slight irritation. “It’s sweet, but I’m fine. I promise.”

His shoulders sagged. “Okay. I promised the boys I’d game with them this weekend, anyway.” Mike tried to mimic the puppy dog look.

“Call me later?” She turned away from him, glancing over her shoulder.

“I sure will. I love you, Angela.” He kissed her, and his smile returned.

“You too.” Angela closed the door quietly. She walked over to the nightstand, picked up a black photo album, and dusted off the cover. Angela found the picture of her and a taller man with long midnight black hair that framed a rough, unshaved face. His arms were around her and they were both smiling. To my best friend, forever and always, Christian, the caption beneath the picture read.

A visit from you would really make my day, she thought. She set down the photo album and went into the kitchen to make herself a cup of tea.

Her kitchen was tiny, barely big enough for two people. The rest of her apartment was fairly open—one couch, a few pictures on the walls and some ironwork candleholders over the fireplace that needed cleaning. In one corner, Angela kept a kitty bed for the stray cats she picked up and gave a home to.

After her cup of hot water was boiling, she added the tea bag, stirred it and brought the cup to her nose. The aroma and warmth of green tea helped her nerves. The past week had been stressful. Mike tried to be helpful by coming over to see her, but as usual, he was just in the way. The winter holidays were a mess for her since Christian stopped coming into town.

Christian picked up his smart phone and pager, stuffed them in his pockets, gathered up his laptop and headed for his car. Work sucked badly when the servers were down in Dallas, because that meant a trip out of town. He could at least call his best friend and former lover. Maybe they could go out for drinks or hang out and spend some time together. He felt guilty. It had been two years since he’d seen Angela and almost as long since he’d last called or written.

Her absence from his life was beginning to bother him, though relationship troubles were routine for him since losing his last girlfriend. It seemed Christian’s very healthy sex drive had interfered with her religious studies and training to be a missionary. She’d always complained about him working so hard in the secular world when he could have been preaching the good faith. He laughed at the idea as he tried to recall her face and couldn’t. He didn’t mind parting with her.

It was still early, but Angela should be at work by now. Chris hooked his Bluetooth earpiece around his ear, picked up his smart phone and dialled her work number, impatient for the phone to connect. The two rings seemed like forever until she answered.

Her sweet voice was all it took to put him in a better mood.

“Do you realise how long it’s been?” She sounded irritated with him.

He slumped in his seat and let out a long, slow breath. “Too long. And I’m sorry.”

“You had better be.” A beat passed before either of them spoke again.

“What’s going on? How have you been?” Chris picked up the stylus from his phone, tapped it against the dashboard nervously.

“I’ve been fine. You do remember this is my work line, right?”

He could almost see her smirking at him, the way her eyes narrowed yet still gleamed with desire for him. “Yes, and again, I’m sorry. I only have a moment anyway. I’m coming into town next weekend on business and might be able to get some free time.”

He thought he heard her breath hitch. “Would you like to get together?”

“Sure. I could really use some company.”

Despite the sadness that was in her voice, he was certain he could cheer her up. The thought of smelling her sweet essence, cuddling against her soft skin brought a grin to his face. “All right. I’ll call you as soon as I get in, okay?”

“Please do,” she whispered.

4.5 out of 5! I thoroughly enjoyed this story...I would recommend this story to other readers and I look forward to reading more from this author in the near future.

Share what you thought about A Christmas Favour and earn reward points.