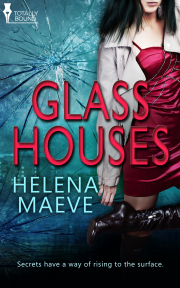 Miriam’s world is knocked off kilter when an ex-lover walks back into her life, eager to reacquaint himself with both her wit and her whip.

Fresh out of college, Miriam Chase has only recently found work as nanny to a wealthy couple with three unruly children. Mere months into the job and her personal life is already on hold. Dating is out of the question and romance hasn’t really been on the docket since she pinned her hopes on the wrong man back in college.

The man in question? Rakishly handsome and enigmatic in all the right ways, he was around just long enough to open her eyes to the joys of whips and leather, and submissive men. Miriam should have known that he wouldn’t call. She’s been telling herself she’s over him for the past two years. It’s not until a dinner party throws him back into her orbit that she realizes old scars can still smart.

Elliot McFarland has known the Hamiltons for twenty years and can’t fathom missing one of their famous soirees. He has no idea that his one and only romantic indiscretion is now their nanny. In the two week stretch before Elliot must leave for the East Coast, he and Miriam are quick to resume their affair, all props included. But secrets have a way of rising to the surface of even the stillest waters and with their illicit romance brought out into the open, Miriam may well be forced to choose between being employed and being with Elliot.

Judging by the slide show, it had been a beautiful ceremony. The church was decorated with baby’s breath and carnations, the aisles lined with gold trim. The bridesmaids wore teal and yet, miraculously, didn’t look like something out of Alice in Wonderland. Penny herself was radiant in her embroidered white gown and I had to admit that, with a three-piece suit and a nice haircut, even her groom cleaned up nice.

The time stamp on the photos dated back to almost four months ago today. That was harder to digest. I nudged my laptop screen shut and pushed myself up from the bed. It had taken me four months to save up for a new computer and now that I had it, I couldn’t wait to shut it off.

I tried to smother the hurt blooming in my gut. It was a bit like trying to put out a flame when all I had on hand was rice paper. It only sort of worked. I couldn’t help feeling betrayed. Penny was my best friend. We told each other everything. Well, I thought bitterly, almost everything. For my part, I had gone as far as to share with her my one and only indiscretion back in college—albeit minus some of the more sordid details.

How could a wedding be too sensitive a topic to bring up when she knew all about my steamy one-night stand with a professor who must’ve been my dad’s age?

Okay, so he had been a mere guest lecturer from another college.

My point still had merit.

I brushed the tips of my fingers under my eyes, fiercely glad that I didn’t put makeup on when I was working. The woman staring back at me from the mirror wore disappointment like an ill-fitting dress. She usually preferred anger to dismay. It burned itself out a little quicker than the seasick frustration I could feel swimming in my belly. There was nothing to be done about that now. Later, once I was done feeling like I’d been methodically but oh so effectively sectioned out of Penny’s life, I would have to send her a message, something nice and harmless and heartfelt, to wish her well.

I would have to fib my way through the congratulations.

Break time was over. Any minute now, Mrs. Hamilton would be yelling my name, or one of the kids would spill something all over themselves and start crying their eyes out like neurotic mini-persons. Something. Distractions were usually a dime a dozen in this job.

It happened almost on cue, via Mr. Hamilton rather than his wife. And he wasn’t yelling so much as rapping his knuckles on my bedroom door. I wondered if he was attempting Morse code.

I made one last ditch effort to compose myself and decided to brave the music.

Patrick Hamilton was a tall, reedy sort with a strangely angular face and a patrician nose. I couldn’t remember the last time he’d sought me out for anything, but my sisterhood of fellow nannies had warned me during one of our playground chats that this sort of thing could happen. Employers—men in particular—sometimes let their imaginations run away with them. They got to thinking that just because a woman slept in their house and took care of their kids she was open and available to all sorts of things.

If this was seduction, though, Mr. Hamilton couldn’t have appeared more embarrassed. “Miriam, hi. Um, am I disturbing you?” he asked, shuffling his feet like a little boy.

I shook my head and considered pointing out that I was technically at his beck and call during work hours.

I knew I was lucky that Mr. and Mrs. Hamilton didn’t mind me taking short breaks so I could freshen up or grab a coffee—or to check my emails. They were more than reasonable about that. Then again, after going through three nannies in as many months at the beginning of the year, they seemed to think their progeny were devils incarnate and anyone who managed to herd them through the day must have been part Fräulein Maria. It wasn’t the case.

“How can I help?” I asked, affecting what I hoped was a solicitous smile. Given my big, horsy teeth, it was likely touch and go.

“I’m afraid we’re entertaining tonight,” said Mr. Hamilton. “Spur of the moment kind of thing—a couple of writers and sculptors and the like. Terribly inconvenient and we didn’t plan in advance, so, um…”

“You need me to run to the store?” I was quick to pull on my denim jacket over my baggy, flower print dress and finger-comb my black hair into some semblance of form. This served me perfectly. I didn’t want to be in the house right now. The temptation to sulk was too great.

Mr. Hamilton nodded and held up a hand-scrawled shopping list. “Would you mind? I’ve run out of eggs and flour and—well, everything you see on that list.” He grinned a little sheepishly at me.

In the Hamilton household, it was Patrick—Mr. Hamilton—who usually did the cooking while I took care of the kids. Paolo cleaned up after all of us.

Mrs. Hamilton’s talents lay elsewhere, in some unidentified sphere to which I didn’t have access.

“No problem,” I said. “I’ll take the munchkins along. Make an outing of it.” Although peeling Riley away from her phone was always a challenge and I’d have to bribe Phoenix somehow.

“You’re a lifesaver,” Mr. Hamilton beamed down at me like a particularly lanky cocker spaniel. He reached out to pat my shoulder and the companionable thump of his hand on my arm couldn’t have been more awkward. It took him a moment, but eventually he realized that he was touching staff. Poor Mr. Hamilton pulled back as if stung. It was a close thing, but he just about avoided smacking his hand against the door in his haste.

I tried not to laugh.

I appreciated the compliment—they were scarce enough—but it was my job to say yes to reasonable requests and make things happen. The Hamiltons paid me well and the job had its perks. Not having to pay rent was the biggest and by far the most attractive. No entry-level job could beat that.

Maybe that was why Penny hadn’t told me about the wedding—maybe she hadn’t wanted to rub it in that she was going places while I was stuck taking care of other people’s kids.

I made my way downstairs into the living room and found the children exactly as I’d left them—Phoenix with his Wii remote in hand, Zara pensively chewing one of her Barbie’s feet, and Riley stabbing her fingers into the smartphone touchscreen, texting God only knew whom.

Share what you thought about Glass Houses and earn reward points.