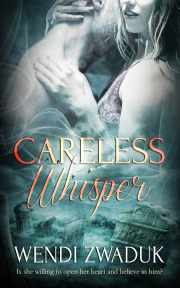 He's her kinkiest desire, if she's willing to open her heart and believe in him.
The dead don't always rest in peace. Some stick around to make the lives of the living hell on Earth. Ryan Black knows the frustration of dealing with the dead. He's a Ghost Explorer. He's conquered houses filled with apparitions, abandoned school buildings that house angry vermin, and managed to woo the female population of Snake Falls, Ohio. But he's about to face his toughest challenge—convincing sceptical Samara Jacobs she not only shares his gift, but holds his heart.
Women fall at Ryan Black's feet and Samara's determined not to be one of the many—that is until she's forced to work with him. He's certain ghosts exist and willing to prove it. As she gets to know the man behind the television persona, she decides the handsome klutz who chases things that go bump in the night isn't so silly after all. But is he worthy of her love?

Publisher's Note: The other books in this world is Miss Me Baby.

“Being a ghost explorer is a pain in the ass.”

Ryan Black leant back in his chair and folded his arms. He shook his head and scoped the scene in the cafeteria, adding, “It’s not fun anymore.”

Chasing spectral beings around buildings on the verge of demolition wasn’t his idea of fun, especially if he couldn’t find her—the one woman to understand him. He served the public frenzy for the afterlife on earth through his investigations, but it wasn’t enough. One of these days he’d break his neck while in search of proof ghosts existed. Sure, he could stroll out onto the main drag of Snake Falls, Ohio, and point out plenty of walking dead, but if the viewers couldn’t see the dead, then his proclamation wasn’t enough.

His video tech, Eddie Mowyer, one of the few living people Ryan called friend, tapped his thick fingers on his soda can. “If you hate it so much, then quit this job and do the weather for Channel Five. I can think of at least three hacks out there who’d take your place in a heartbeat just to get the hoards of girls. It’s not like you prove the existence of ghosts.”

“Ghosts do exist. If I’ve told you once, I’ve told you a million times.” Ryan balled the wrapper from his sub sandwich. “You know the reason I won’t give up.”

Eddie rolled his eyes and groaned. “I know, I know, not until you find her, whoever this fantasy woman is.”

“I want to find my wife.” How could Eddie not get the point? Ryan clenched his fist. Damn. The nights seemed to get lonelier the longer he spent away from Lis. When he closed his eyes, he could barely remember her smile. Fuck.

“I’ve heard the story so much, I’d swear it was mine.” Eddie folded his arms and hunched over the table. “You never want to hear this, but your beloved Felicity was a wench who couldn’t keep her legs closed unless it was for you. Maybe she meant what she said and really wants you to move on.”

“What if I don’t want to get over her?” God, he hated to lie. He wanted his life back.

“Ryan, someday you’ll want a woman to grind her butt into the middle of your back in the dead of night because she wants to stay warm. You’ll need that pair of arms to hold you when your day’s been a load of shit. That’s when you’ll wish you had moved on.” Eddie nodded over his shoulder. “Look around at the scenery. Ohio girls are the stuff of legend. For example, Meredith has those legs a man fantasises having wrapped around his waist.”

“Well, then there’s Caren. She’s got a nice rack and she’s single.”

“Pick nits.” Eddie snorted and shook his head. “You’ll shoot down all my ideas just to be right.” He scoped the cafeteria room once more. “What about Samara? She’s cute in a girl-next-door kinda way. All peaches and cream. I’ve caught her checking you out once or twice a day for the last year.” He pointed to Ryan. “She’d make a perfect forever girl.”

“I had my forever girl. But I could be wrong.” Samara checked him out? Hmm… Kinda nice to know the attraction wasn’t a figment of his undersexed imagination. He’d spent many a night fantasising about her, holding her, making love to her, waking up in the morning and seeing her smile.

At her table across the room, Samara curled up in her chair, paperback book propped in one hand and concentration written on her face. From his position, he couldn’t read the title, but he’d passed her desk enough times to know she liked romance novels. In the two years he’d worked in the same building with her, he’d heard her speak a total of three times but he knew her voice like his own.

4.5 out of 5!...a delightful romance...I like the world Ms. Zwaduk has built, a mix of fantasy and reality that strikes the perfect balance for readers.

I love books that are outside the box of their genre. Careless Whisper is one of those books...All and all Careless Whisper was an enjoyable read and I liked how different it was. I would say more about...

Share what you thought about Careless Whisper and earn reward points.