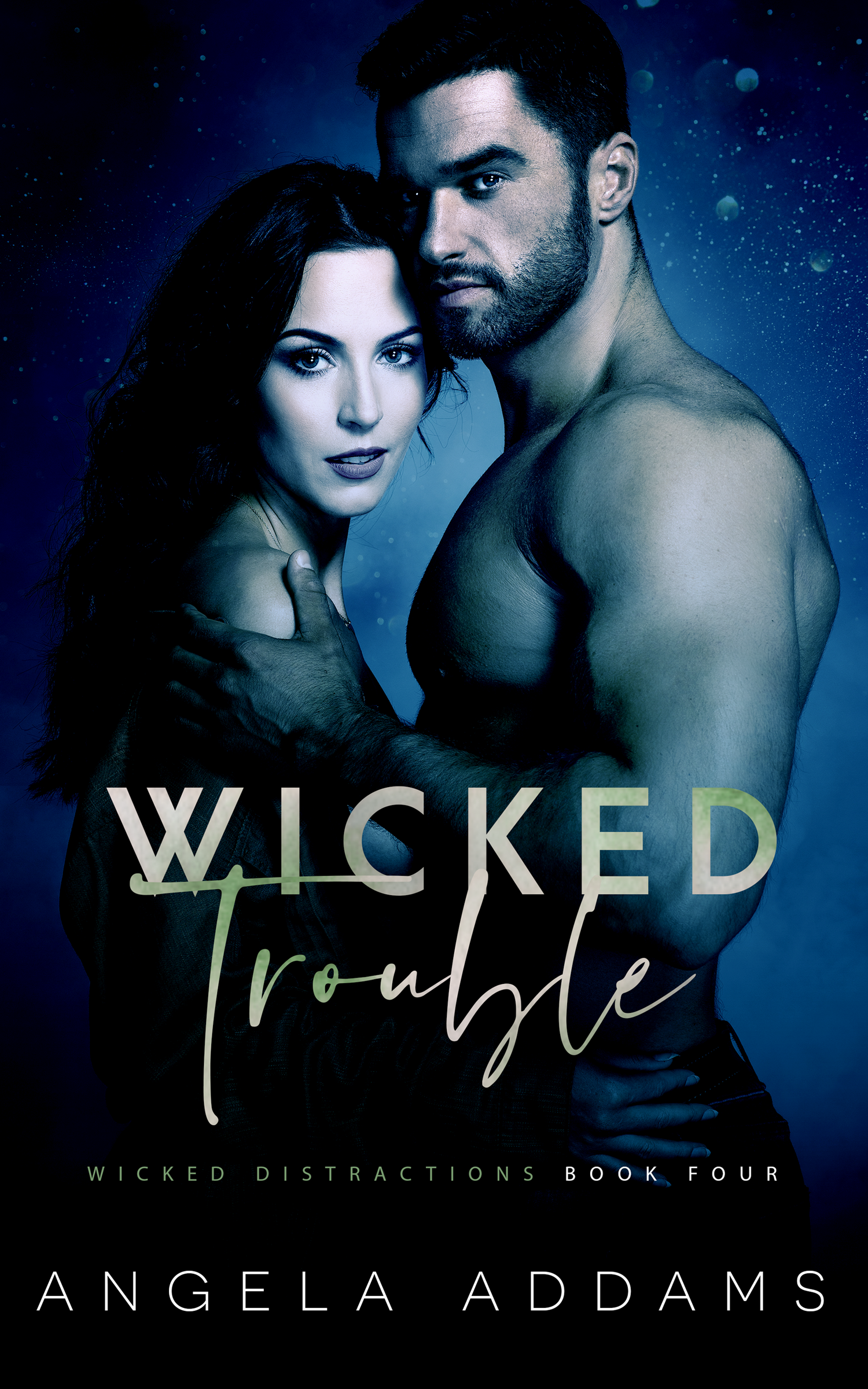 Book 4 in the Wicked Distractions series

Her fetish cruise vacation started with a bang, literally, but fun quickly turned to terror when death came knocking at her door.

Cammie Sheppard, personal assistant to Sabine Cowan, is a capital-O-organized, type-A workaholic and, according to Sabine, in desperate need of a vacation. Despite the fact that her boss has explicitly forbidden her from touching anything related to work, Cammie has a plan for her forced five-day Dark Matter Kink cruise. One, schmooze and network on behalf of Cowan Enterprises. Two, product-test all the kink goodies available. Three, get laid as much as possible. Even a working girl needs a little release every once in a while, and Cammie has been saving up.

When she meets Zane Roberts, she finds a kindred spirit, so much so that their chemistry ignites, and Cammie checks off number three on her to-do list several times in the first few hours after departure. When she returns to her own cabin later that night, she discovers the body of a man—who is very much deceased—but when she goes to get help and returns with security, the body is gone. No one believes her, except for the mysterious Zane Roberts, who, it turns out, is conducting an investigation of his own.

Cammie thinks the dead man is connected to Zane’s case, but Zane isn’t convinced. Cammie might be a sub in Zane’s bed, but she’s anything but when she’s got a job to do. Right now, she’s determined to figure out how a dead man ended up in her cabin and stop a murderer from striking again.

Cammie didn’t do vacations very well, mostly because she loathed stepping away from the love of her life…work. But when the uber-powerful Sabine Cowan insisted on an all-expenses paid kink cruise, what she called “mandatory R and R”, what was a girl supposed to do?

A hardcore type-A like Cammie played to her strengths, so that’s what she did. She packed her bags and made a cruise ‘to-do’ list. One, schmooze and network more Kitty Cat connections—Gentlemen’s Club candidates, Kitty Cat hopefuls and new clients. Two, product test, because, come on…a kink cruise? A girl’s gotta have a little fun at work. Three, get laid…repeatedly. It is a vacation after all…even if it’s forced. It’d been a looong time since she’d found a man to crank her little kink-loving heart.

“This will be your cabin, Miss Sheppard. Your boss really loves you.” Ben, her steward, winked like they were already best friends. He’d been effervescent the entire way to her stateroom, bubbling with energy and peppering her with questions about where she’d traveled from and what she hoped to do on the five-day cruise. It had been impossible not to get caught up in his enthusiasm as he pumped up the various events that had been planned. “Shall I put your bags in the closet?”

A walk-in closet? In a stateroom? “Yes, please. Thank you, Ben.”

Of course, Sabine had spared no expense, so Cammie’s cabin was beyond luxurious. It was larger than her own bedroom at home in New York and big enough for a king-size bed, a lounge-dining area and a restroom that included an actual whirlpool tub. The view was spectacular as well. With floor-to-ceiling windows along one wall, Cammie would be able to see miles of ocean with no obstructed views. She also had a balcony and pictured herself having her morning coffee there while she checked email and knocked a few things off her ‘non-cruise to-do list’, of course.

“Is there anything else I can do for you, Miss Sheppard?” Ben stood at the door, his hands folded in front of him and his face clearly eager to please. His blond hair flopped over one eye, giving him an adorably disheveled look.

“Oh gosh, no. I’m fine.” She dug out some money from her purse then handed it to him. “Thanks for getting me here safe and sound. This ship is so huge. I think it’ll take me five days just to get the hang of where everything is.” Which was a total lie… Cammie had gotten the entire ship mapped out from bow to stern and everything in between before she’d stepped foot on board.

“I’m here if you need me. Just pick up the phone and I’ll answer.” Ben slipped the cash into his pocket with a nod and a grin. “Don’t forget about the sunset mixer on the Sky Deck.”

Cammie rubbed her hands together. “I’ll be there!” A sunset mixer sounded like exactly the type of place she’d find people to network with.

She had an hour to get ready, so she pulled out her sun-and-fun mixer dress—an orange, yellow and pink strapless that hugged her curves just right—then headed into the massive restroom for a dip in the tub. If Sabine wanted her to relax, she could at least make an effort.

It turned out that networking was easier than finding a nonalcoholic cocktail on the Sky Deck. Cammie had been offered no less than four umbrella-adorned drinks by four different scantily clad servers, and each time she’d asked if it was possible to get a soda or even water, she’d only been met with looks of confusion before a mumbled, “Of course! Let me get that for you.” She’d yet to find a cold drink in her hand, but she had met three very eligible men, who had been eagerly listening to what she had to say about the Kitty Cat Gentlemen’s Club. They hadn’t even balked at the fee range she’d hinted at.

“You can sign me up, little lady.” Mr. William Haversmith wore a huge tan cowboy hat on his big head. Everything about the man was larger than life, from his booming laugh and his ridiculously large cowboy boots to his long, curled mustache. “In fact, a pretty little thing like you can do whatever she wants with my assets.” He winked.

“Bill, don’t you know women don’t like to be spoken to like that?” Elm Stone also wore a cowboy hat and towered over Cammie in the same way his friend did, which wasn’t hard, considering Cammie was a whopping five foot three inches. He tried to come off as more gentlemanly, even though Cammie had witnessed him slip his hands over several of the servers’ asses as they passed by.

“I’m sorry. Can’t help myself. You’re a tiny, sexy thing, though. And on a naughty cruise like this to boot! You’re a firecracker, aren’t you? I can see it in your eyes.” He winked again, and Cammie had to wonder if he had a tic or if he really did think she—or any woman, really—was in to his kind of flirting. “And those dimples! So cute! I could just eat you up.” He leaned closer. “You don’t mind if I call you ‘little lady’, do you, sweetheart?”

Did she mind? Hell yes! But she’d never say that out loud. Working in an industry that catered to men, she’d become used to the ways that men behaved and the condescending things they often said. “Of course not, Mr. Haversmith.” She grinned, making sure her dimples popped for him. “I’m just going to charge you more for your membership.”

The men all laughed in their hearty way, not believing for one second that she would, in fact, give them the elevated price she reserved for special men like him. She laughed too, but hers—if a person listened closely—was edged with a ‘fuck you’.

“Well, you’ve got my contact information. Be sure to put it to good use, honey.” He didn’t wink again, thank goodness, but he did waggle his eyebrows like he was sending some kind of secret message.

Cammie laughed again then waved him off. “If you’ll excuse me, gentlemen, I’m going to search out a drink. I’m absolutely parched!” She didn’t stick around for another suggestive comment, but the men’s laughter and what could only be described as catcalls did follow her as she moved through the crowd.

“Oh, there you are!” A tall redhead wearing a super-flattering, black skin-hugging leather dress rushed to her on four-inch stilettos with a frosty glass in hand. “Soda water for you. I added a lime just in case you wanted a bit of flavor.”

“Thank you!” The timing couldn’t have been more perfect. Cammie really was dying of thirst.

She turned toward the gravelly voice like a puppet on a string. “Yeah, I’m not in to alcohol.”

“Smart. Don’t want to get too drunk then end up tied down and at some Dom’s mercy.” The guy standing next to her checked all Cammie’s eye-candy boxes. He was tall and wide, barrel-chested, thick-armed and, like her, appeared to enjoy food. “That’s why I’m only sipping my beer.”

“Bound and at the mercy of a Dom is exactly how I want to end up.” A bold statement, sure, but Cammie had a to-do list, and this guy might be her way to check off one of those bullet points.

“Zane,” he said, one eyebrow raised.

Amused or intrigued? It was hard to tell. He tilted his pint glass toward hers.

“Cammie.” She turned herself toward him so she could take in his full size then clinked her glass with his. She liked men with meat on them. They complemented her curves and were usually hefty enough to hoist her into the positions she loved. “You here alone?”

His eyes crinkled and a grin tugged his lips. “Are you hitting on me?”

“Not yet.” Cammie grinned back.

“If you say cute, I’m leaving.” Cammie took a sip from her glass, watching him over the jutting lime. Her body heat had to be wafting off her with the way her pussy quivered and wept. Zane was exactly the kind of guy she could have some fun with.

“Enticing.” He gave her a spicy once-over, trailing a hot-as-hell gaze down, lingering over her double Ds to the curve of her extra-wide hips, then back up again. “Yes, I’m here alone.”

“I’m not looking for love.” Cammie would never be accused of beating around the bush, especially not when it came to sex.

She is an avid tattoo collector, a total book hoarder, and loves anything covered in chocolate…except for bugs.

She lives in Ontario, Canada in an old, creaky house, with her husband, children and four moody cats.

Share what you thought about Wicked Trouble PRINT and earn reward points.

Other books in the Wicked Distractions seriesView Series Page