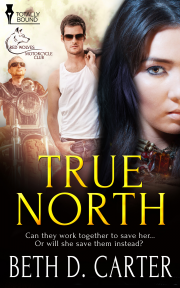 Allison is running from her past when she’s kidnapped and left for dead. North and Givon are friends on opposite sides of the law but can they work together to save her—or will she save them instead?

North Tabion and Givon Halloran have been friends their entire lives. Each has survived an abusive father only to end up on opposite sides of the law as adults. Givon is the town sheriff while North is the leader of the Red Wolves, an outlaw motorcycle club. However, they’ve managed to maintain a friendship that means everything to them.

Allison Evening is on the run. Hiding out from an ex bent on vengeance, she’s tending bar when she’s kidnapped into a human trafficking ring. In a desperate attempt to free herself, she runs, only to be shot down and left for dead.

North and Givon are in the right place at the right time. They save Allison and, as they nurse her back to health, the three find a bright, burning love. But when her past catches up with her, the only way to save herself and her newfound love is if she, North and Givon can follow love’s true path.

The warm summer sunrays sparkled like diamonds upon the calm lake. Dragonflies danced on the water’s edge, their iridescent wings patting the water’s surface. North stretched out his long legs and popped a cigarette between his lips. As he lit it, Givon nudged him with his foot, almost tipping him over.

“You’ve got to cut that shit out,” Givon told him. “You’ve been smoking for too long. You’re going to get lung cancer.”

“You know, you should’ve been born a woman,” North shot back. “You’d make a wonderful old lady. Nag, nag, nag.”

“I’ll nag my foot right up your ass.”

North grinned and dragged in a lungful of the bitter smoke. As he blew it out, he looked at the burning coffin nail and thought maybe Givon was right. His birthday was next week and he was turning the big four-O. There was going to come a time when he was going to have to reap what he sowed—and damn if he wanted to carry around an oxygen tank on his motorcycle. Besides, it wasn’t as if he liked the taste of cigarettes or the nasty morning breath they always gave him. It was just a habit he’d fallen into over the years of being a Red Wolf. Everyone smoked, so he did too.

But wasn’t that why he was trying to change the club? To not follow the same old path? One had to change to survive.

He flicked the cigarette into the pond.

“I’ve always questioned you having a mind to begin with,” Givon replied sardonically. “But it’s nice to know I won’t have to haul you to chemo in your old age.”

North flipped him the finger and went back to watching his pole. They’d been out here for an hour with one fish to show between them. He’d wanted to do a fish fry tonight as they camped, but it was quickly looking like they may be roughing it with canned food.

“Who’s your current Sergeant at Arms?”

“I’ve got Skids wearing the patch and he seems competent enough.”

“But Axe was a friend of his. Right now, he’s grieving. We all are. The betrayal of one of the pack cuts deep.”

“Do they know? About what really happened to Axe?”

North raised his eyebrows. “They suspect. But no one knows what really happened to Axe.”

“Don’t give me that shit, North. We know. And I’m pretty sure Merrie Walden knows, and if she knows, then so do Braden and Leo.”

“If they’re smart, they’ll keep it to themselves,” he said. “If word gets out Gray Dog offed Axe, the Red Stripes will want retaliation, even if he was defecting. And I don’t want retaliation for that piece of shit.” He gestured at the pond. “I’m also seriously hoping I don’t snag him on my hook.”

“Yeah, that would ruin this little camping trip.”

They fell silent again, trying to fish. It should have been a peaceful time of day but the lack of anything biting combined with club talk had North feeling restless and moody.

“Our coffers are hurting,” he admitted, breaking the silence. He wasn’t in a silent mood.

“You talking church business with me?”

Yeah, North knew he should shut up. Club business never left the chapel, but despite them being on opposite sides of the law, Givon had always been there for him, watching his back and making sure North didn’t screw up too much. He trusted Givon Halloran with every cell in his body.

“Yes,” he answered succinctly. “That newspaper article claiming Gray Dog was a hero has crippled our protection details. Less and less ranchers are asking us to ride with them.”

“Your shop not pulling enough in?”

North gave a humorless laugh. “No, Giv, the shop doesn’t give us what we need. I have got too many old men sitting around the Wolf table with more than a foot into retirement. Do you know what that means? They won’t pay dues, but I’m still obligated to pay for their 401K, and old people’s medicine costs a helluva lot.”

“So going legit is off the table?”

“Nah. Right now that’s still the long-term goal, but I don’t see that happening anytime soon with the Demon Devils camped out on our doorstep, taking our protection money.”

“Thanks, but not the kind of money I need. Besides, you give me enough help by not pissing on my boots.”

“The Red Wolves aren’t in my jurisdiction,” Givon reminded him. “And Destiny appreciates all your contributions to the community.”

That made North laugh. “If you really want to brown nose here, tell me that you’re investigating the Devils. Charge them with some type of criminal shit. It’s gotta be dope. I haven’t heard about gun running and there’s not too much else for a club to do to make some serious dough.”

“Get me some legit proof of illegal activities and I’ll haul their asses in,” Givon said. “Otherwise, I’m not starting a war with the Devils. We’ve been over this before.”

“Yeah,” North mumbled and reached for his pack of cigarettes.

Givon raised his eyebrows and gave him a pointed look.

With a sigh, North crumpled the pack, cigarettes and all and tossed them into the trash bag. “Fuck. I’ve picked a wrong time to give up smoking.”

Givon snorted. “I’ll give it a week—”

A scream rent the air, followed by the sound of a gunshot. They looked at each other for a split second before mindlessly dropping the fishing rods as they surged to their feet.

“You packing?” Givon asked grimly, reaching for his Smith and Wesson Sigma strapped onto his belt.

“Always,” North replied and pulled a sleek Glock 17 from the holster at his waist.

“It sounded like it came from over that ridge.” Givon pointed toward a high ridge about fifty yards away.

The two men hurried, keeping as low as possible as they ran. As they scrambled up the incline, Givon pointed for North to sweep around to the side. Givon counted down with his fingers then gave a thumbs-up. Both men popped up at the same time, guns drawn as they surveyed the area.

A woman lay face down, arms flung out wide as if she’d just fallen down. She wore only panties and a bra, the white lace contrasting sharply with her dusty skin. Blood pooled in her lower back before running off her hip onto the ground.

Movement came from the side of the tree line and Givon jumped up.

The shadowy figure immediately turned and began running hellbent through the brush. Givon swore and took off after the person while North rushed to the woman’s side. He quickly pulled his T-shirt over his head then pressed it against the bullet hole in her back while reaching for the pulse in her neck. He held his breath until a faint beat thumped against his fingers.

It was the way the three characters worked together that made this so special. It was a puzzle with pieces that linked together into a perfect fit.  They had an entire backstory, history and pro...

Having read the first story and enjoyed it, I was delighted to get to read more of Ms. Carter's engaging series. And it was well worth the wait. Their forays into a new relationship are definitel...

Share what you thought about True North and earn reward points.

There is perhaps no other creative outlet that bares the writers soul quite like writing. Whether it's writing poetry, songs or stories, the modern day bard has to tap into deep recesses of the soul.

• Avaryan Rising by Judith Tarr. I've always said if you want to learn how to write beautiful prose, this book is a must. It's actually three novels of the Avaryan world rolled into one, and it pushed me to become a better writer.