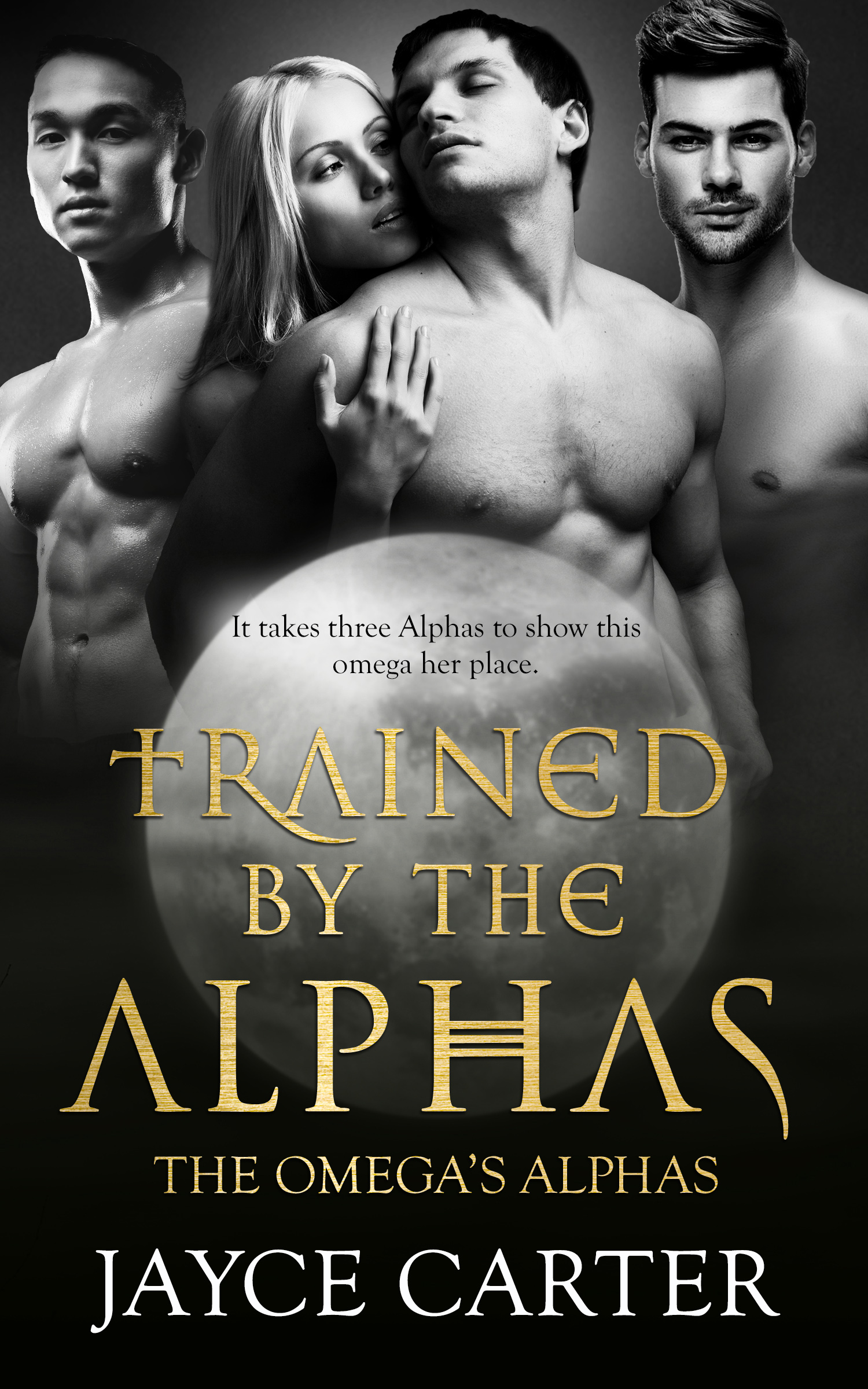 Trained by the Alphas PRINT

Book 9 in the The Omega's Alphas series

It takes three alphas to show this omega her place.

Alison has lived on the fringes of her own life, quick to help every omega who needs it but unwilling to risk any friendships or connections. Unfortunately, when Alison’s friend falls prey to slavers, she has no choice but to dangle herself as bait in order to find her. Instead of the slavers she expects, though, she ends up caught by three alphas she wants nothing to do with.

Daniel, Kyle and Trent risk ruining an undercover case to save a drunken omega, but they’re caught off-guard when the omega beats them up and escapes. The strange woman excites and intrigues them…and the only way to find the slavers before the stolen omegas are lost forever is for Alison to go undercover with them—as their slave.

When Alison plays the part of a willing, obedient slave and the alphas revel in her every submission to them, the line between reality and pretense blurs. As Alison and the alphas race to find the kidnapped omegas before it’s too late, they’ll have to face their own demons or risk losing everything at the hands of the very enemies they’re chasing.

This isn’t exactly where I planned on my life taking me.

Then again, when had plans ever taken her anywhere she really wanted to go? Alison floated from one emergency to another like some attention-deficit avenging angel.

That life suited her, though. No distractions. Nothing to tie her down. Just her and her sometimes warped sense of justice.

And the who knows how many men currently staring at me.

She lifted her hands and toyed with her curly blonde hair, knowing it would lift her shirt and show off a strip of skin between the top and her tight leather pants.

“Come on, baby, show us something good!” one of the men called out.

Alison offered him a mocking smile, playing the line between tease and whore, while reminding herself to keep her eyes on the prize.

She wanted to entice. To lure someone into a chase. To do that, she needed the faceless men to covet her, to want to not only have her, but break her.

It was a difficult line to walk, but she had no other choice.

She’d tracked down every lead she had, every shady contact and blackmailable asshole she could find, turned over anything she could follow up on and called in all her favors for what little information existed—her friend Anne had been abducted by local scouts looking for omegas to sell off. It was the only thing that made any sense, but the time to find her was running out.

That thought threw off her rhythm, but she disguised it as an alcohol-fueled slip before she crawled off the table and sauntered toward the back area of the bar where she had her things.

The music pounded in her veins, so loud she felt as though her heart followed its pace. This was the third night she’d pulled this stunt, and still to no avail. Plenty of offers for quickies in the bathroom, a few who’d suggested paying her for the night and one man who had even wanted to become her ‘sugar-daddy’. She’d turned them all down.

I’d cut their hand off if they tried.

If they spent five minutes with her—the real her—they’d realize their mistake.

This was a game she was playing. It had started with the tight pants, with the shirt that read OMEGA: BETAS NEED KNOT APPLY, and had continued with the face she knew was a trap.

Her wild, curly hair, her full lips—those things had always made her look young and innocent. A gift from her mother, she supposed, from what she could remember. Not that it mattered. While she didn’t care about looking pretty, she wouldn’t deny that her features had helped her more than once. Men turned complacent when there was a pretty face across from them. They started thinking with their dick, and that always helped Alison.

She opened her water, listening for the click to show the seal was intact, before gulping down nearly half the bottle in one go. Her normal exercise routine didn’t involve things like dancing, and she’d woken the morning after each time with a deep ache in her muscles.

Tomorrow would be no different.

“You look good out there.” The man who spoke stood just beside her table.

One inhalation let her know—alpha. It required a person getting rather close for her to tell, what with all the bodies packed in so closely in the club, but once she found that sickly-sweet smell, it couldn’t be denied.

It was always like tasting fake sugar to her. Something she wanted to like, something she should enjoy…and yet something that she knew to be artificial. One taste and she’d regret it.

Which is why I’ve stayed the fuck away from alphas all my life.

“Thanks,” she said, sliding back into her ‘I’m a bad girl who needs a strong man to put me in my place’ persona. “I just love dancing.”

“I can tell. This place is a little loud for a good conversation. Want to head out? Find somewhere quiet?”

She fought the urge to roll her eyes. Why did men always try such stupid tactics? Instead, she curled her painted red lips into a smirk. “Thanks, but I don’t go home with strange men—at least not on the first night.”

He returned the smile, then nodded. “Sure thing. Well, maybe next time?”

When he walked away, Alison’s smile dropped. They normally didn’t give up that easily. Maybe he wasn’t as certain he could close the deal as others?

Or is it something more…

Was he the one she was looking for? Could he have been one of the scouts using this club as their hunting ground? She could say the one looking for her, but she didn’t care for putting herself in the prey category.

Alison was not prey. She was a predator through and through.

All she had to do was lure something in by playing the drunken, defenseless omega, and when the asshole tried to pounce?

Alison would show her teeth.

Kyle tried to ignore the omega swaying to the music on the bar, the one with the curly blonde hair and no sense of self-preservation.

He wasn’t a victim blamer, but after all he’d seen, there were times he wanted to grab a few women and make them look at what happened to those who weren’t careful enough. He wished they lived in a world where that wasn’t true—he’d lived his life trying to make that world—but a person could only see so many crime scenes of murdered omegas before they had to accept the reality.

In their world, a woman alone, drunk and making a spectacle of herself was at very high risk.

Don’t think about it. You have other things to worry about tonight.

“Anything interesting?” Daniel took a sip of his drink—a dark glass to disguise the fact that the cup held water rather than liquor. Funny, because Daniel still looked out of place. No matter what the man did, he always looked like someone’s best friend. Short, soft brown hair and earnest, almost honey-colored eyes kept him from fitting in somewhere like this.

How the two had become best friends was the sort of mystery people couldn’t solve. Daniel was kind but a worrier. Kyle? He tended to make a joke of everything, never taking life too seriously. Daniel looked like a cop and Kyle like someone Daniel might arrest.

Opposites attracted, though, and they’d been friends for so long, he couldn’t recall much of a life without the man who was more than a brother to him.

Kyle shook his head. “Nothing yet. A few familiar faces, but that’s it.”

Daniel huffed before leaning back in the booth. “Felicity isn’t going to make much of an impact with Blondey up there doing her one-woman show.”

“Maybe the scouts would rather take an easier prize.” Kyle let his gaze shift to the woman at the bar—long black hair, dark eyes, high cheekbones. Felicity was, without a doubt, pretty.

“I don’t like her here,” Daniel offered for what had to be the millionth time.

“I don’t like it either, but we don’t get to make all the rules. Besides, do you have a better idea than bait?”

A soft growl was Daniel’s response at first. “We’re supposed to be keeping omegas safe, not dangling them in front of the bad guys like carrots.”

Kyle wanted to argue, but he’d been about as comfortable with the entire plan. Despite him and Daniel running the task force who searched for the slavery ring, they still had bosses, and those bosses had thought some undercover work—in this case having Felicity pose as a flirty omega to entice a scout—was the best in for them.

Catch the scouts when they moved in, then leverage that to find the information they needed.

And all of it in time.

Kyle rubbed his eyes, the lack of sleep getting to him.

How was he supposed to sleep when all he could think of was the fucking calendar? He’d see the days passing, the weeks, and that huge box circled in red two months away.

The last chance to take down the people he’d chased for years, the last chance to get those in charge, the ones who would have the names of the slaves already sold, who could help them recover so many omegas who had gone missing over the years.

But to do it, they had to find an in. They knew the date, but the location would only be revealed to buyers and scouts with merchandise.

Which left them exactly nowhere. Just grasping at straws, which had a young, inexperienced FBI agent like Felicity wearing a short skirt and corset top, hoping like hell someone took the bait before they ran out of time.

Because time was not on their side.

Share what you thought about Trained by the Alphas PRINT and earn reward points.