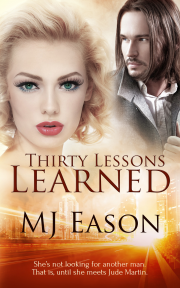 Experience has shown Paige Wilder that relationships end badly, so she’s not looking for another. That is, until she meets Jude Martin.

It’s been said that life is just a series of events with consequences. On their own, they don’t add up to much. But when you put them together, you never know where they’ll end up taking you or what the outcome will be.

Paige Wilder’s game changer happens when she’s dumped by a boring guy who finds her to be too boring. What?

Paige decides she’s done with men. She has several good friends, she lives in one of the most exciting cities in the world and she has a perfect companion to come home to at night—her little dog Sammy. Who needs a man? At least that’s what Paige thinks, until she attends a masquerade ball and ends up meeting the man of her dreams—who just happens to be her new boss.

It’s been said that life is just a series of events with consequences.

On their own, they wouldn’t add up to much, but when you put them together, you never know where they’ll end up taking you or what the outcome will be once you’re there.

For me, the first event with the most unbelievable consequences had been my decision to move to New York City. That decision had come with the disastrous breakup of my marriage to a guy who I’d thought I wanted to spend the rest of my days with.

Dwight Taylor. You know the type. High school football hero and all-around ladies’ man—a fact that I hadn’t been aware of until after I’d married the guy.

Through high school, I hadn’t believed how lucky I was to have someone like Dwight. He’d actually picked me, out of all the other girls in school—me, a shy thing who’d lived mostly in an imaginary world of her own making.

I was so lucky.

After I’d graduated from the university, I’d come home to Sweetwater, Texas, and married my football player.

But it hadn’t really been until five years into our ten-year marriage that I found out that, unlike me, Dwight hadn’t been quite as good at keeping our wedding vows. He’d had a fling with the former prom queen.

After I’d been all set to walk out on him, Dwight had promised me it was a one-time only thing. Me, being the innocent wife that I’d been, had believed him.

Too late I’d learned that good old Dwight had moved past the prom queen to most of the cheering squad and beyond. Truth was, Dwight had pretty much run out of likely candidates in Sweetwater by the end of our marriage and had been forced to branch out to the neighboring town.

At the time, I hadn’t realized what a stroke of good luck I’d had getting out of that marriage.

I’d only seen myself alone at thirty-two and living back home with my parents.

After I’d cried for two weeks solid without consolation, I’d finally come to a decision about my future. I needed a whole new attitude—one that I wouldn’t find in Sweetwater. I’d needed to get out of this town and soon. Sweetwater had been just too small. I couldn’t have thrown a rock without hitting one of Dwight’s women.

It had been then that I’d told my parents, John and Rebecca Wilder, that I was moving to New York City to pursue a new career path.

Secretly I’d thought my parents were thrilled. Oh, don’t get me wrong. They’d been right there, supporting me through the whole ugly Dwight thing. But I’d thought they were ready for some changes as well.

The second I’d packed and had moved out once more, the For Sale sign had gone up on their little ranch-style house on Cedar Street, and they were planning their own move. Sell the house, buy an RV and see the world, starting with Galveston Island. It had been simple.

But for me it had been anything but. As a small-town girl, even a thirty-two year old, moving to New York City had been the equivalent of moving to another universe. Everything about the city had seemed foreign to me. And even though I’d told myself I was my own woman, I’d always had my parents or Dwight to lean on. Here I was, all alone for the first time.

I hadn’t had a job at the time, and I had no real idea of how I was going to go about getting one—much less have money to eat—while I decided what I was going to do with the rest of my thirties.

But thanks to my ability to save for a rainy day, I’d managed to put aside some of my paychecks from the elementary school I’d taught at each week. I’d be okay for a while. Well, at least I wouldn’t starve to death right away.

So, I’d found myself an apartment that I could hopefully afford to keep and had gone to work finding another job that wouldn’t remind me of my past mistakes or Dwight.

With a major in elementary education and my minor in English literature, I hadn’t been sure how far those would take me in a city that tough. But I’d always been lucky when it came to finding work.

This had brought me to the next important event—taking the job at Martin Publishing, in the accounting department of all things, which was something I couldn’t have been less qualified for, unless I’d actually counted with my toes during the interview.

But my new boss, Danielle Kincaid, had seen something of promise—or more likely desperation—in me and hired me on the spot, and since then, she’d also become my best friend in the world.

Six years later, I’d apparently been doing just fine. Definitely up to Danielle’s predictions, because I’d managed to work my way up to become her second-in-command.

It had been at this stage in my career that another key event had happened—the ending of my year-long relationship with reliable Harry Davison, who’d also worked for Martin in the nonfiction department.

Harry had been a dream come true for a woman who’d been cheated on by her husband. He was the perfect boyfriend—always there for me whenever I needed him to be but never too clingy or demanding. That, for me, had been a must in boyfriends because, frankly, I’d only needed them…well, when I needed them. And having gotten over one bad marriage with Mr. Football Hero back in Texas, not to mention the too-numerous-to-mention boyfriends before Harry, I hadn’t wanted to repeat my past mistakes. You know… Get hooked up with the type of guy whose only interest in me was simply for sex or possibly as a mother figure.

So you see, Harry had been perfect—kind, considerate and nice-looking, in that bookish kind of way.

Harry’d had only one flaw that I could find. He’d been boring as hell!

Oh, not to me, of course. For me, someone who’d survived the football hero and all the other superficial guys, Harry had been very interesting.

He’d actually talked to me as if he cared about my opinion and not just how fast he could get me into bed. But for my best friend Danielle, Harry had been as dry as wheat toast and just about as exciting.

But then Danielle’s taste for men went in a very different direction from mine. Dani liked men who only wanted to play. Nothing serious for her.

For me, safe Harry had been my new dream guy, in spite of all Danielle’s efforts at getting me to live a little—not to mention her pointed attempts at finding out if Harry was as boring in bed as he was out of it.

Okay, so I had to admit, after Dwight and several other mistakes along those same lines, Harry had been… How to put this nicely? Harry had not been the best I’d ever had, but he’d definitely been the most reliable. Harry had been comfortable. He’d never let me down, certainly never cheated on me the way that Dwight had.

I’d actually believed all those things about Harry, right up until I’d found out the truth.

As it turned out, it doesn’t really matter how boring they were, most men—given the opportunity—would stray. Harry was the exception to that rule…or so I’d believed.

That event took place two days…yes, two days before my thirty-ninth birthday and just after Harry had returned from a business trip abroad.

That was when my sweet, or at least who I’d believed to be sweet, faithful boyfriend came to my door and announced that he couldn’t take me out for my birthday—or any other day, for that matter—because Harry had met the girl of his dreams.

This struck me as kind of funny, seeing that we’d been going out exclusively for over a year now. Harry and I had, on several different occasions, had some serious talks about our future together. I thought I was the girl of his dreams.

“Harry, what are you saying?” I asked, with that all-too-familiar stupid sound of disbelief in my voice. I’d stood in the doorway of my tiny apartment and couldn’t believe I’d heard him correctly. This was the guy who’d sworn I was a dream come true for him just a few weeks earlier, right before he’d made this trip.

“Paige, I’m sorry. I know how hard this must be for you, me telling you this. Believe me. I didn’t mean for it to happen. I certainly didn’t set out on this trip wanting it to. But I’ve never felt this alive before. I think I love her. She’s the most exciting woman I’ve ever met. It’s just that things began, and we clicked in bed, and—”

At that point, Harry picked up my ‘hit by a truck’ expression, and he realized I was about to get all emotional on him.

“You just met her? On this trip? The one you just got back from?” I asked, when I could actually speak again after hearing the worst possible insult any woman could hear. What was I now? Boring in bed as well?

MJ Eason grew up in a small Texas town famous for, well not much of anything really. Being the baby of the family and quite a bit younger than her brothers and sister, MJ had plenty of time to entertain herself. Making up stories seem to come natural to her. As a pre-teen, MJ discovered romance novels and knew instinctively that was what she wanted to do with her over-active imagination. She wrote her first novel as a teen—it’s tucked away somewhere never to see the light of day—but never really pursued her writing career seriously until a few years later, when she wrote her first romantic comedy and was hooked. Today, MJ still lives in Texas and still writes about romance. In fact, she can’t think of anything else she’d rather do.

Share what you thought about Thirty Lessons Learned and earn reward points.