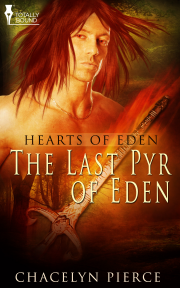 The Last Pyr of Eden PRINT

Book 1 in the Hearts of Eden series

Book one in Hearts of Eden Series

When Samira and Raynor leave the protection of Eden they are susceptible to dark magic attacks and love that takes them on a perilous journey.

For eons, the four elementals have bled their nourishing blood to sustain life for superior spirit Elementals known as Daemons. No race has suffered in despair as critically as the fire elementals—the Pyr. Their numbers dwindled down so miserably, that Raynor is the last known warrior of the race, living on a faint hope that there is more of his kind between both worlds.

He ventures out constantly searching for elementals to save from enslavement. In reality, he searches for a female to bond with. After a yearlong trip away from Eden—an elemental settlement hidden deep in the woods—he is immediately confronted by the enchanting Sylph, Samira.

The Last Pyr of Eden

Samira took a bite of an apple and grinned at her fellow teaching instructor. Conway strolled up to her cottage with ten boisterous younglings, who ranged from five to eight years old, dancing in circles around him.

She stepped outside and he sighed. "You’re not even dressed to teach this morning’s lesson. You sure do get lazy in autumn. If there’s a chill wind in the air, it’s almost like it immobilises your limbs," Conway shouted, followed by a snorting laugh, which caused the fledglings to giggle with him. Samira cherished him as her best friend.

Samira smiled. "And you seem to become grumpier as summer goes away."

The children laughed and Conway flashed his marvellous smile. "Come on, Sam, we’re on a strict time regime. Do you know how long it took me to gather the kids from their homes this morning? Tierra couldn’t decide on which shoes to wear." He ruffled the hair of the small brunette Gaian.

"I told her that to the first pair and she didn’t believe me."

"Tierra, don’t listen to him, you all know he likes to tease. He’s been teasing me the moment I came to Eden, he’s lucky I love him enough to put up with it."

"My mommy says you came from outside the gate," Aura said, stepping forward. The little Sylph reminded Samira of herself at that age.

Eden had been home for ten years now, hidden in thick woods of the Great Appalachian Valley and warded against evil spirit elementals or any wandering human. It was the only place the four elemental races felt safe and at peace. When she’d first arrived in Eden, Conway had taken her under his brotherly wing, even though she was younger and not a water elemental. He’d seen her through some pretty tough times, he’d held her hand through the cold-sweated nightmares and the tears. Never once had he pushed her to speak of the horrors in her past. Unlike the females of her race, Conway had never once shunned her for the noticeable differences in her appearance. He also didn’t look down on her because she didn’t utilise her power as often as other Sylphs.

Conway had also been her chaperone into the unaccustomed elemental way of life. It had been particularly difficult in the beginning because she’d been raised in the human world for so long. He’d introduced her to passages from the Ancient Tomes, told the age-old stories of their forefathers, and had even specified that elementals aged and developed differently than humans. He’d told her that on her twenty-fifth year her body would fully mature, but from that day forward it would continue to appear young and ageless, at least until death found her. Many of the other female Sylphs in the community looked as flat-chested and adolescent as she had before her maturity. The others were too standoffish to befriend her and tell her the natural way of things. She’d gone through her maturity alone, with no clue as to what was happening to her body. She’d been an outcast from day one and still retained that label even after all these years.

Everyone had been relatively pleasant to her but she was an anomaly with no family roots inside or outside of Eden. Her hair was paler than any of the other Sylphs’ and after a freakish power display a few years back, they’d deemed her too powerful to be a normal Sylph female. She’d overheard their gossip over the years, the rumours that distinctively set her apart from everyone else. Worse yet, she had no answers to their prodding questions. She’d been raised in the human world, unguarded and left with a human woman to watch over her, little protection from the ghoulish Phantoms. Since many elementals lived in protected colonies or villages, she’d sometimes wondered how her parents could have taken her away from something so vital. Because of that, she lacked the closeness, friendship and extended family values that she saw daily between other Sylph kinfolk.

A few months ago, she’d finally reached her sexual maturity. She’d gained curves in places she’d never thought she would. She found herself checking out every Sylph male as if he could be the potential father of her future children, even if many of them seemed intimidated by her. She knew it was almost time to seriously consider taking a mate but despite her bombarding lust for strangers, she didn’t want anyone in the settlement. She wanted someone she couldn’t have, the only Pyr left. The male who’d cradled her in his arms the night he’d rescued her and had told her that she would be okay, and had spoken of a safe place she could call home. The male who only came home a few times a year and seemed to be just as distant in his mind as he was in body.

He is coming. She’d never fully understood the tiny connection she had with him, and she’d never tell anyone, but the air always let her know when he was near.

Samira knew she should try to forget the fascination with Raynor and choose one of the eligible male Sylphs to bond to. No two elementals had ever come together sexually in all recorded history, though that didn’t stop her from imagining his tongue slipping deep into her pussy. Of pleasuring her until she was mindless from all the passion. She’d even pleasured herself with erotic thoughts of him, wishing that it was his hand instead of her own. However, it was an unwritten law to bond within your elemental race. That was likely never to change—it was the natural order of things. Last solstice, Conway had chosen a mate in the water healer, Inna, contributing to the Lir gene pool. Samira knew her time was coming soon, it wouldn’t be long before the Elder of the Air told her it was time for a mate and possibly petitioned himself in the running.

"I think...class will be postponed today." Samira smirked and took a bite out of her apple. The wind caught her snowy-silver hair—she tried not to notice how it was getting whiter each year. Already it was brighter than any other Sylphs’, and they weren’t afraid to tell her so. "That’s why I’m not dressed, it has nothing to do with the weather, Conway," she quipped.

A rocker by heart, Chacelyn Pierce is constantly ear plugged with heavy tunes blaring to stir up the phantom personalities that swarm her mind. It's no surprise that she enjoys writing and reading to satiate her appetite for the male antagonist in a story.

Married to a blatant redhead and mothering a diva, there is never a dull moment in the house. As a native Texan, she doesn't personally own a horse but follows the unwritten southern rule of knowing how to ride one.

When she's not testing the emotional capacity of her characters, she works part time as a dog groomer and book cover artist.

Share what you thought about The Last Pyr of Eden PRINT and earn reward points.

Other books in the Hearts of Eden seriesView Series Page