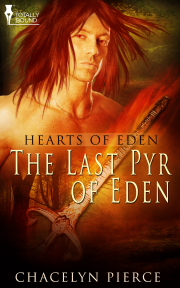 The Last Pyr of Eden

Book 1 in the Hearts of Eden series

When Samira and Raynor leave the protection of Eden they are susceptible to dark magic attacks and love that takes them on a perilous journey.

For eons, the four elementals have bled their nourishing blood to sustain life for superior spirit Elementals known as Daemons. No race has suffered in despair as critically as the fire elementals—the Pyr. Their numbers dwindled down so miserably, that Raynor is the last known warrior of the race, living on a faint hope that there is more of his kind between both worlds.

He ventures out constantly searching for elementals to save from enslavement. In reality, he searches for a female to bond with. After a yearlong trip away from Eden—an elemental settlement hidden deep in the woods—he is immediately confronted by the enchanting Sylph, Samira.

A rocker by heart, Chacelyn Pierce is constantly ear plugged with heavy tunes blaring to stir up the phantom personalities that swarm her mind. It's no surprise that she enjoys writing and reading to satiate her appetite for the male antagonist in a story.

Married to a blatant redhead and mothering a diva, there is never a dull moment in the house. As a native Texan, she doesn't personally own a horse but follows the unwritten southern rule of knowing how to ride one.

When she's not testing the emotional capacity of her characters, she works part time as a dog groomer and book cover artist.

Share what you thought about The Last Pyr of Eden and earn reward points.

Other books in the Hearts of Eden seriesView Series Page